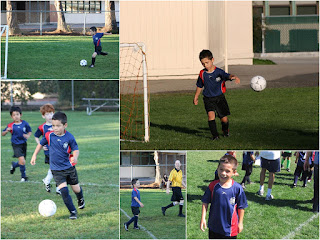 3Po's and Jammy's soccer league season ended last weekend, and there's more than a vacancy in our Monday, Wednesday and Saturday schedules -- there's a a hole in our heart. Okay, that's overdramatizing, but 3Po and Jammy are really are going to miss those practices and games. The soccer bug has bitten them hard, and they're really sad about not being part of a team any more. Getting a shiny trophy and a snazzy pin at the last game (which, to add insult to injury, was canceled due to the rain) was small consolation for the prospect of being deprived of soccer games throughout the winter.

The boys aren't the only ones who are sad. Alfie was really getting into his refereeing duties; as late as three weeks before the last game he was all set to buy a stopwatch and some cleats, and was working on a plan to convince our other team's referee to let him officiate all the remaining games of the season. And I have to admit, I'm going to miss it too. Some of the moms I know -- okay, most of them -- are relieved that soccer season is over; my Facebook news feed has been filled with "Only 2 games to go!" and "Can't wait to get my Saturdays back!" and "Thank God it's over" updates for weeks now, but I feel exactly the opposite.

I have to say, kids' soccer is great entertainment. All season long I've loved watching the boys at practice, and their Saturday games have gotten my heart racing every time. Alfie watches English Premiere League and European Champions League football almost every weekend for 9 months out of the year, I've seen some pretty exciting games, but none come close to seeing eight boys thunder towards a size 3 ball like a pack of greyhounds chasing a fox. I'm not surprised when Alfie gets into a game -- after all, he frequently swears at the tv when he thinks the linesman has made a bad call, and I always know when a team has scored a goal, even when I'm upstairs, because of his demented yelling -- but I never expected to turn into a raving lunatic myself. I yelled words of encouragement to the kids ("Go Henry!", "Nice goal, Nicholas!"). I screamed in delight at every good pass, groaned in dismay at every almost-goal, and cheered at every goal. I even turned into one of those annoying interfering parents, shouting instructions ("Pass! PAAASSS!") to the players while standing right beside the coach (who probably wished he could give me a red card). I couldn't help it (now I know how Chelsea and Liverpool fans feel) -- and fortunately for my sense of dignity, none of the other parents on our team seemed to be able to control themselves either. We all bonded over our passion for the game and our delight at seeing our sons so determined and committed. I met some great parents on this team, and I'll miss their company.

The best part, of course, was seeing our boys -- all the boys on the team, actually -- grow and improve over the 12 weeks of the season. Their kicks got stronger. Their balls traveled farther. They progressed from crowding around the ball and fighting their own teammates for possession, to spreading out and make some really unselfish passes. Their friendships strengthened and their team spirit grew. Of course, as they grew more comfortable with each other, the silliness and goofing off at practice increased tenfold, but it also made practices more like playdates and less like practices.

Maybe we were just lucky. 3Po and Jammy are on the same team, so I didn't have to juggle four practices and two games each week (If you're planning to have more than one child and have them join soccer teams, I highly recommend having twins). We had a dedicated coach (How dedicated? Read my Ode to The Coach post on Silicon Valley Mamas to find out) who has played soccer all his life and knew how to handle the kids. All the parents were enthusiastic and involved, as were most of the kids. And we actually had a fairly talented squad, as far as 6 year olds go (I know 75% of parents will think their child is above average, but 3Po's and Jammy's team actually won all of their games except 1), so the kids got the added bonus of feeling like winners.

Maybe I just need to admit that I'll miss it because I happen to be of those dreaded creatures: The Soccer Mom. Whatever the case, I'm glad 3Po and Jammy had such a great experience in their first year of soccer league. If feeling this way makes me a Soccer Mom, sign me up for the next season!
posted on Wednesday, November 24, 2010 Labels: 3Po, Jammy, sports, the real football, twins
Email ThisBlogThis!Share to TwitterShare to FacebookShare to Pinterest