Behind the Scenes at the OfficeMax Back to School Blogcast

Last week, my friend Kim saw from my tweets that I was attending the OfficeMax Back-to-School blogcast. After the blogcast, she tweeted me with:

@bonggamom When you said you were going to be on the Office Max thing, I thought you meant, like me, watching from the web!

Yup, that was me. Thanks to OfficeMax and Elm Publicity's Beth Cleveland, I got the incredible opportunity to appear alongside organizational guru Peter Walsh in an OfficeMax webcast, similar to the workspace organization blogcast he did a couple of months back, but for back-to-school organization. I was part of a panel of "experts" on organization (dis-organization is more like, at least on my part!) that included Peter, award-winning teacher Heather, and two local students Megan and Keaton. We had a great time talking about the challenges that parents, teachers and kids face when school starts (you can watch the whole blogcast here).

After the blogcast, Twitter was filled with tweets from bloggers who had attended, and everyone had such nice things to say to me (@bonggamom) Heather (@tweenteacher) and Peter (@Peter_Walsh). I really appreciated all those supportive tweets -- thanks, everyone!! -- but one thing I took home from my experience is that the people in front of the camera actually play a very small part in a production like this. Everyone sitting in front of their laptops saw Peter, Heather, Megan, Keaton and me chatting in front of the camera for 40 minutes: 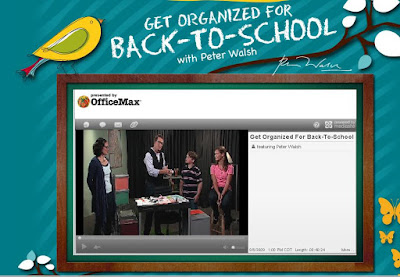 ... but the reality is that it took a lot longer than 40 minutes and involved a lot more than five people. There is an army of people behind the camera, from the director to the cameramen to the sound technicians to the set designers to the scriptwriters to the stylist to the makeup artist to the PR liasons to the caterers, all dedicated to getting this ol' blogcast on the internet! So to highlight their great work, I'm giving you all a behind-the-scenes look at the OfficeMax blogcast. Think of this post as the stuff that you'd see in the Special Features section if the blogcast ever makes it to DVD (hey, you never know......) 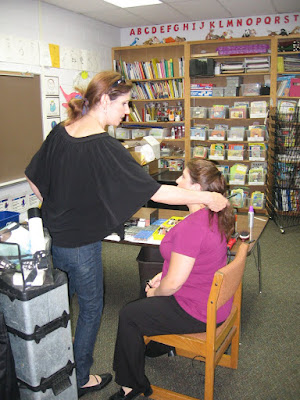 It's no secret that everyone in front of the camera, man, woman and child, gets their hair and makeup done, and that it takes ages. Fortunately our roles didn't require prosthetic limbs or fish faces, so ours didn't take that long, but even then, no detail was overlooked. I had to go back to Karen, the hair and makeup artist, multiple times because my hair kept covering my face and needed to be pinned back. In fact, a lot about me was pinned back that day. My sweater had to be pinned back to make sure it didn't open up while I bent over to pick up a prop in one scene. My undershirt had to be pinned way back to make sure my cleavage didn't spill all over the place, small as it is. And my mike had to be pinned higher to my mouth to make sure my voice was loud enough. So I was pinned up like Elizabeth Hurley in her Versace gown -- but no one saw any of it (cleavage or pins).

Speaking of mikes, boy did I have trouble with mine! First of all, they clipped it to my jeans, which I thought made my ass look way humongous (which is why I covered it up with the sweater). Then I forgot all about it when I went to the bathroom, and it almost fell into the toilet when I unzipped my jeans. And I realize now that I should probably have turned the mike OFF when I went to pee! It was lunchtime so I'm hoping the sound guys were eating lunch, far away from their earphones.

Enough potty stories. I took this photo because I loved Karen's trick of transfering all her lipstick into pillboxes. Now she doesn't have to keep opening and closing tube after tube after tube. 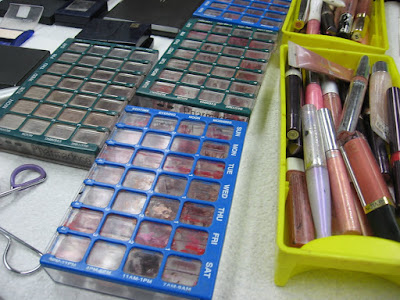 There were only five people onscreen but we kept Karen pretty busy. She had to do touchups throughout the day, because, man, are those lights hot! 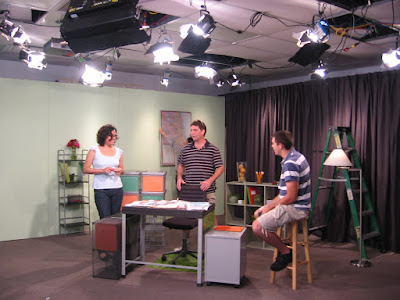 They couldn't find anyone my height to stand-in while they tested out the lighting and the background, so I stood in for myself. Peter's stand-in kept me entertained while people rushed back and forth trying out different background props. Again, no detail escapes their attention: they moved the wall map so that it wouldn't look like half of Chicago's suburbs were sprouting from my head. And that vase of flowers behind me had to be placed in juuuust the right position so that viewers could see it excatly between Peter and me when Camera Two was on. They even stress about the color of the drapes and whether they're wrinkled or not. 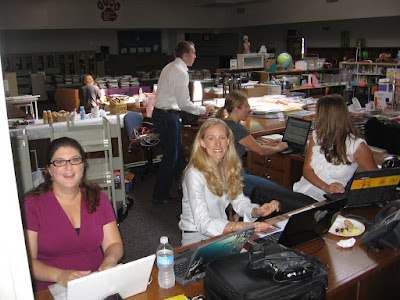 Twitter obviously played a big role in this blogcast, given that 200 bloggers viewed it live, and many of them tweeted it live. People were working furiously to make sure we all had access to Twitter on set, and people were working just as furiously to keep up with the stream of tweets and questions that ensued. Office Max's publicity department and PR consultants tweeted during the blogcast, and Peter, Heather and I tweeted for 30 minutes afterwards. It was such fun, Heather and I joked to the production crew that unless we were tethered to the set, we would inevitably drift back to our laptops. And it was so gratifying to see #Omx_Blogcast trend to #4 on Twitter that day! Great job, Twitter Brigade! 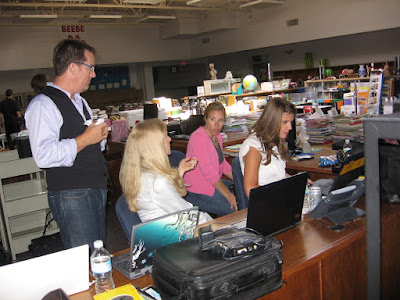 See the room we're in? That's the library of Beebe Elementary School in Naperville, IL. Books were stacked and shelves were moved in order to make room for all the equipment the production crew brought in (the sets were in an adjoining room). And afterwards, they cleaned up so well that you'd never know it had every been anything other than a library. 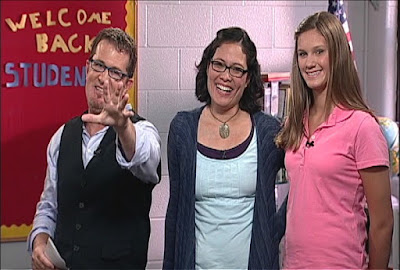 One last note: I know I said that the on-screen talent is only a small portion of the whole production, but I can't minimize the role that Peter Walsh played. He doesn't just waltz in on the set five minutes before filming. He puts in a lot of work developing and rehearsing his lines (actually, the script had no real lines, just talking points so that everything was natural and conversational, not over-rehearsed). He was great at keeping that live conversation flowing, and he really helped us novices relax. Peter's a great guy to work with (and I'm not just saying that because he was kind enough to autograph my rolling case)!

All told, we spent the better part of two days doing rehearsal and filming. And that's not even including the time spent developing the script, and all the pre-production meetings we attended (and there were probably twice as many held where my presence wasn't required). But they kept us well fed with sandwiches, fruit and the yummiest cupcakes ever. And the result was worth it. It's certainly a far cry from my YouTube vlogs with me or my kids parked in front of our 8-year old digital camera, shooting a couple of minutes of blurry, impromptu footage!

So thanks to Elise, Greg, Tom, Kathleen, Karen, Jules, Marie, Bill, Jennifer, Beth, Bo, Peter's stand-in, the sound guy, the cupcake gal, and everyone else whose names I couldn't remember. I'm going to say what everyone on Twitter should have said (and would have, if they had known the role you all played): Well Done, Guys.

posted on Sunday, August 09, 2009 Labels: about me, blogging, bongga stuff, videos
Email ThisBlogThis!Share to TwitterShare to FacebookShare to Pinterest

Sounds like a lot of fun. Thanks for the behind the scenes play-by-play. ;)

Great, detailed, accurate post! Well said and a great tribute to those who helped us through the process.
-Heather

Thanks for giving me the chance to join the live blogcast! And the fun goodies.

Love the behind the scenes look. I had no idea there were so many people involved. You looked great, btw! (thienkim from SV Moms group)

Wow! I never would have known all the prep work that went into the webcast had it not been for your account and pictures! I was so glad that I could participate and see you live! Not only were you fabulous but I have been cleaning, sorting, and organizing ever since! Can't wait for your next webcast appearance!

Thanks Ana for the wonderful insights into OfficeMax's Back to School Blogcast! I loved when Peter introduced you as a "Domestic Engineer!" Hope the name sticks. Keep up the great work with Finding Bonggamom. Cheers!

My hubby gave me a job title of "Domestic Engineer" too. On our 10th anniversary, I was promoted to "Advanced Domestic Engineer" with a 100% pay raise. Too bad my salary was at $0 when I started. Anyways, I was impressed with all the background prep that goes into a webcast.