Wild nights: kissing and telling in the age of Facebook and social media 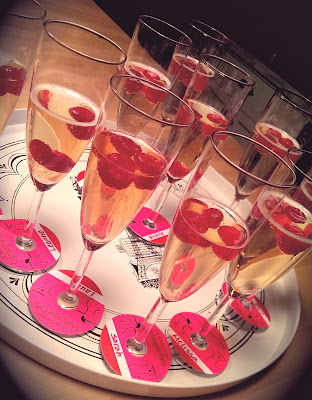 As a blogger, my life is pretty much an open book.  But there are times when my sense of discretion overrides my desire to tell a good story.   For instance, let's say that a blogger friend of mine went to a cocktail party thrown by some fellow PTA moms.  Let's suppose that it was a ladies-only cocktail party, with champagne and desserts.  Let's further suppose that there was an additional item on the dessert menu -- man candy, in the form of attractive, well-muscled bodybuilders serving drinks.

Theoretically, the aforementioned blogger would waste no time whipping out her camera and snapping photo after photo of these divinely muscled hunks, right?  And who could blame the aforementioned blogger and her friends for wanting to pose with aforementioned hunks?  With all that champagne coursing through everyone's body, one can imagine that most of the moms would be more than happy to let go of their inhibitions and enjoy a night of slightly naughty, but harmless fun.  Everyone would have a great time, and it would quickly become known as the Best Party Ever.

But what would happen the morning after?  Naturally, my blogger friend would never embarrass her friends by posting any of the photos she took that night.  In fact, she'd probably send all photos to her friends (along with a promise never to let the photos see the light of Facebook) and delete them from her own phone.  No, the issue my blogger friend would have would be what to do with her own photos.  Should she blog about them or post them on Instagram as she does with practically every event in her life?

I can totally relate with this hypothetical situation.  Alfie says that I look at every event in my life as blog fodder, every photo as an opportunity to post to social media, and I suppose there's some truth to that.  But the events I share are usually have to do with Bonggamom the mom, or Bonggamom the wife.  Rarely do I write about Bonggamom the woman -- which is ironic, since "Finding Bonggamom" is about rediscovering my identity as an individual.  But if there's one thing I've learned since starting this blog, it's that being a mom is a part of who I am, and I couldn't let it go even if I wanted to.  And as a mom, I wonder if photos of me with a shirtless hunk on Instagram (if they existed -- we're talking about a friend, remember) might embarrass my kids, make me look like some kind of cougar so desperate to recapture her youth that she just had to tweet and Facebook the moment she got within 2 feet of an amazing male chest.  No matter how amazing that chest was.

I would struggle with my decision, go back and forth with my finger hovering on the Post to Facebook button, long after the champagne giddiness and euphoria had ended.  But in the end, I would probably choose to keep the photos on my hard drive, and decline to share them with the world -- even the most innocent photos where the guy had his shirt on.  Even though I'd love to share my story of how, just for a night, I ditched my boring old PTA mom image, I'd keep the details of this slightly amusing story to myself (and Alfie, of course -- we have no secrets).  It's not the kind of thing my daughter would want floating around the internet when she becomes President of the United States or wins a Nobel Prize.

Fortunately, I don't have to face any such dilemma, because all of it happened to a friend, not to me, and it's all theoretical.  At least, that's my story, and I'm sticking to it.

posted on Sunday, November 24, 2013 Labels: about me, blogging
Email ThisBlogThis!Share to TwitterShare to FacebookShare to Pinterest