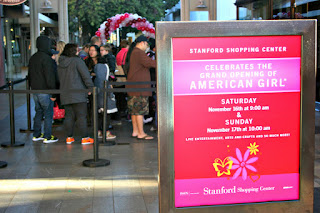 It was a big weekend for American Girl!  Their 16th store, American Girl San Francisco, held their Grand Opening Ceremonies on Saturday and Sunday, with a ribbon cutting, free gifts, crafts, entertainment, and fun perks throughout the mall.  The Pea and I were at the Stanford Shopping Center all weekend to join in the celebrations, and we had a great time!  Here's a recap of events:


People started arriving at the Stanford Shopping Center as early as 5:00AM on Saturday morning.  Since lines were not allowed to form until 7:00AM, they had to wait outside the parking lot, which was blocked until 6:00AM.  By 7:00AM, a small crowd had gathered to make a run for the ticket tables.  By 8:30AM, when The Pea and I had arrived, 700 tickets had already been issued, and the ticket line had grown to about a 1000 long. 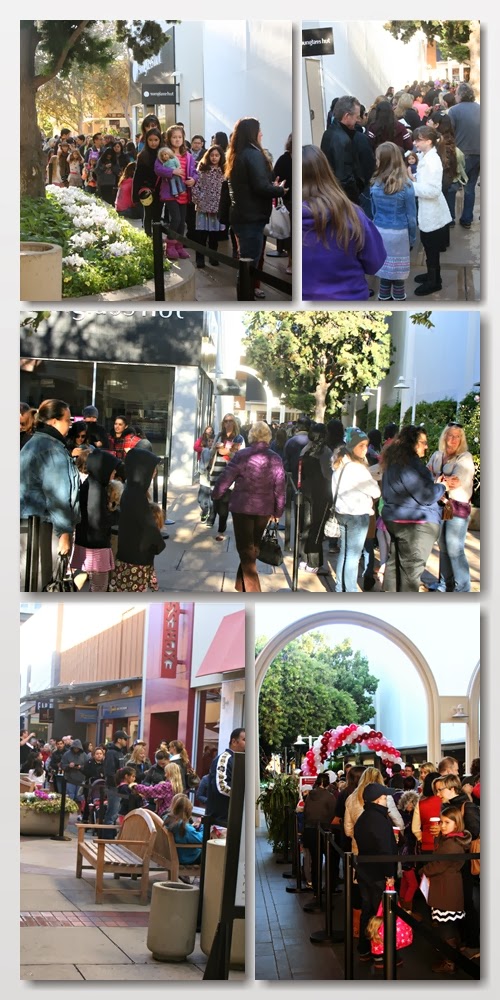 The ribbon cutting ceremony started at 9:00AM sharp.  Someone made a short speech welcoming everyone, then a little boy and his little sister cut the ribbon.  The girl was about 5 years old, and she was carrying a doll dressed in the Brocade Holiday Dress. She wore the matching girl outfit and looked like a doll herself.  By the way, if you're wondering about my photo below, it was taken from inside the store!  My AG contact let us enter the store to photograph the ribbon cutting ceremony and first stream of girls. 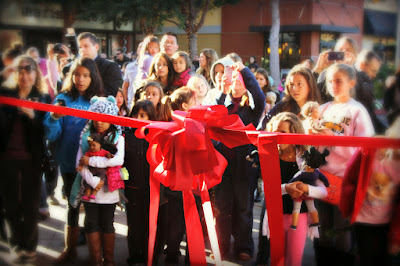 Here are some photos of the first few girls entering the store. They were let in at 9:10 AM, just 5 minutes after the ribbon had been cut.  What a special moment!  They'll always remember they were one of the first girls to enter American Girl San Francisco on opening weekend. 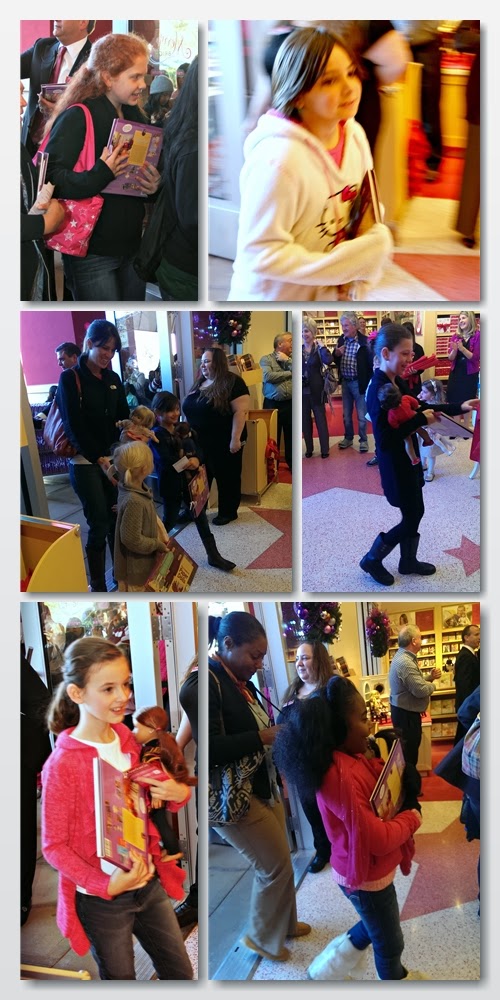 For five lucky girls, the day was turning out to be even more special.  As the first five to enter the store, they received a free American Girl doll!  This was a total surprise (and I have no idea whether they do this for all store openings, or just this one), and it left many of the girls -- and their moms -- crying tears of joy.  I tracked down ticket holder number 1, whose uncle had waited for her since 4:00AM to get her that very first spot in line.  What a sweet guy to go through all that trouble for his niece!  I should have asked if he had a girlfriend or spouse, because ladies, this guy is perfect dad material. 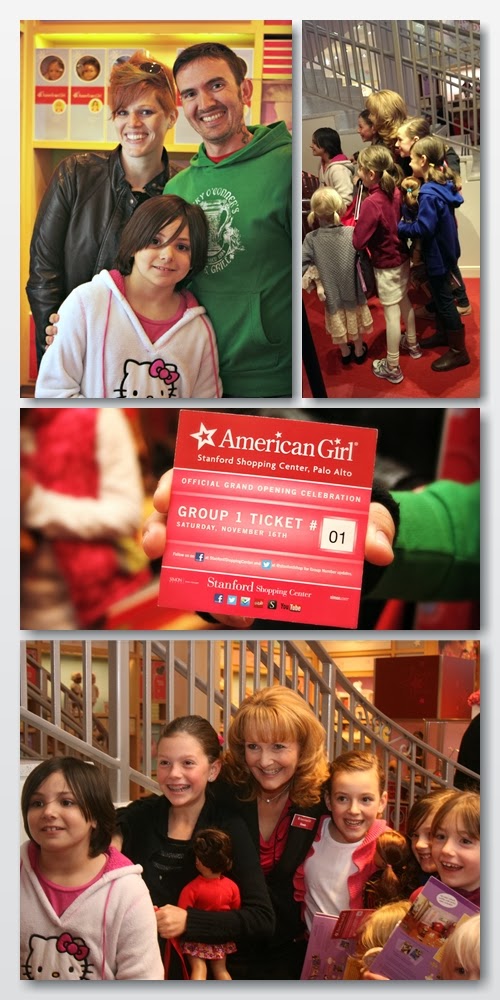 The whole thing reminded me of the 6-hour waits to ride Star Tours and Radiator Springs Racers when they opened.  I followed the Stanford Shopping Center's Twitter and Facebook streams closely throughout the day, and I read many accounts of people waiting in line for an hour or more to get tickets, then waiting 5 or 6 hours for their ticket groups to be called.  They issued ticket groups as high as 65, and stopped issuing tickets at about 2:00 PM. 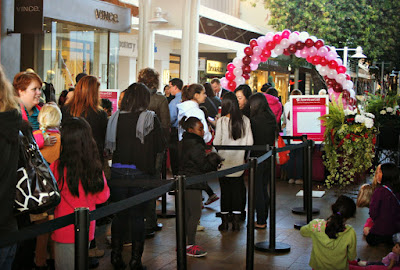 Fortunately, the ticketing system was a lot like Disneyland's Fast Pass.  Guests were not allowed to enter the store until their group number was called (you could sign up for text updates or follow the shopping center's Twitter and Facebook feed for updates) so they had to do something else.  The people who drove a long distance (people came from as far away as Utah!) stuck close by.  American Girl had craft tables to decorate doll totes (on Saturday) and keepsake boxes (on Sunday), and the mall's kids' program also had craft tables.  There were musical performances in the afternoon, and many stores had American Girl-related special offers.  My favorite one was the BOGO offer at Sprinkles when you said "American Girl"! 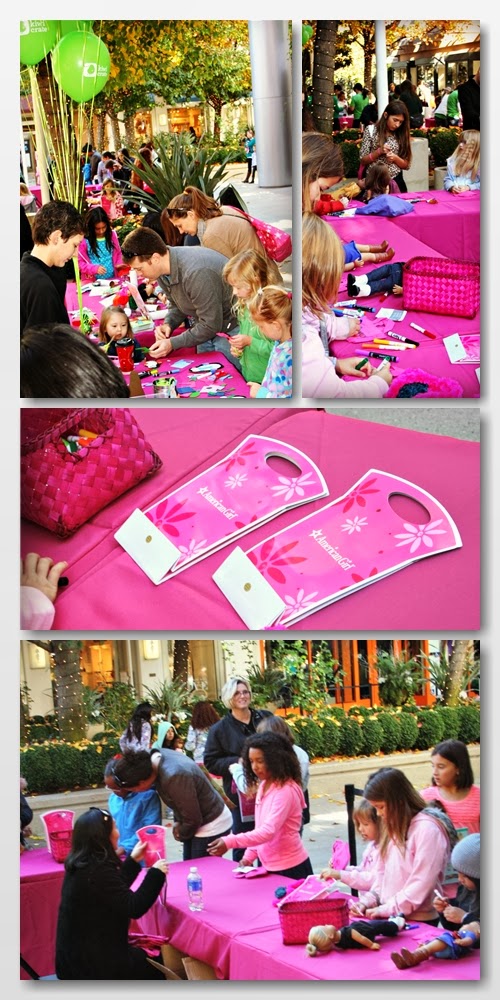 I enjoyed myself so much that I resolved to return the next day.  This time, I'd have no press contact to get me inside; I'd be lining up just like everyone else.  I ran over to the shopping center at 9:00AM on Sunday (might as well get my workout in) to check the ticket line out, and it was much, much better.  I only had to wait 5 minutes to get a ticket, versus 1 1/2 hours at the same time the day before!  I was issued tickets in group number 24, and we were eventually called in at 1:30 PM.  Much like Saturday, the Sunday tickets ran out by mid-afternoon, and they issued almost as many tickets (up to group 61); I guess the visitors arrived in a more steady stream on Sunday, versus a huge crowd on Saturday morning.

Anyway, I took The Pea and a couple of her friends, and we discovered a fun red carpet backdrop where the girls and their dolls could pose for a photo opp: 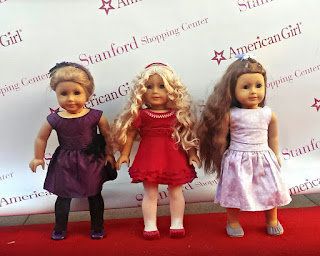 So was it worth the wait?  Everyone who entered the store on Opening Weekend got a free gift: an American Girl paper doll book.  Different books were passed out depending on what time you entered (I saw Rebecca, Kit, Felicity, and Samantha books).  Girls waiting outside the store also got to take home an American Girl craft (since we went on both days, we have both the tote bag and the keepsake box). 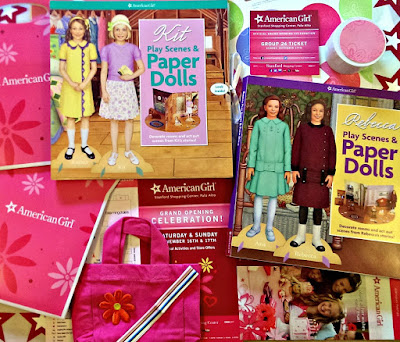 If you're doing a strict cost-benefit analysis, you'd be crazy to go:  the paper doll book only costs $12.95, and each craft can't be worth more than $5 (okay, maybe $10 if they actually sold these crafts in stores, but you could have gotten the craft even if you hadn't waited to get into the store).  But how many American Girl Store openings are you likely to attend in your lifetime?

In my case, this was a no-brainer: I'm a big American Girl fan and I live 5 minutes away, so I was able to wait for our number to be called from the comfort of my own home.  The Pea might one day take her own little girl to a future opening in whatever city she ends up in, but this is probably going to be it for me.  So it was totally worth it.  From all the happy faces -- both girls and grownups -- we saw over the weekend, I'd have to say most people agreed with me.  After all, who wouldn't drive hundreds of miles to see their little girl's face light up in that once-in-a-lifetime smile?

I'll end this post with a few more photos of the new American Girl Store.   Since I live so close by, expect many more posts and photos!  You can see more of my photos on my American Girl Flickr photoset, as well as my post on Bonggamom Finds.  What's more, I've got 2 American Girl giveaways you can enter: 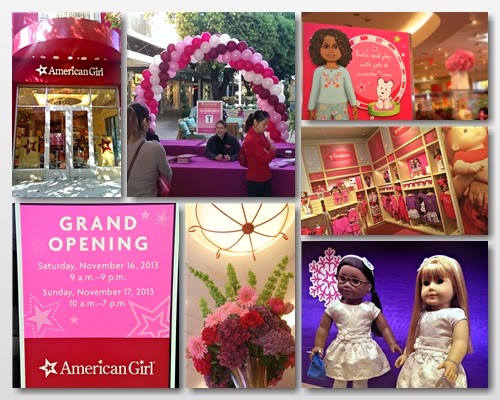 Great post Bonggamom :)
We were there at 7am Saturday & got group 16, which gave us 4 hours at the mall with the amazing and adorable crowd

Saturday we enjoyed brunch at the Cafe

How exciting for your family! Great pictures!