Actually, it has worked out even better for us, because the new store isn't technically in San Francisco.  It's at the Stanford Shopping Center, about 40 miles away from San Francisco in Palo Alto-- my hometown!!  I live just 5 minutes away, so I can forgive the misleading location name.  I've been stalking Stanford Shopping Center since spring, looking at every construction project and wondering which one would ultimately become the American Girl Store.  It wasn't until July that I noticed the "Coming Soon: American Girl" sign on the scaffolding beside Pottery Barn. Since then I’ve watched the site grow from a bunch of steel beams into the familiar red-and-white American Girl storefront. 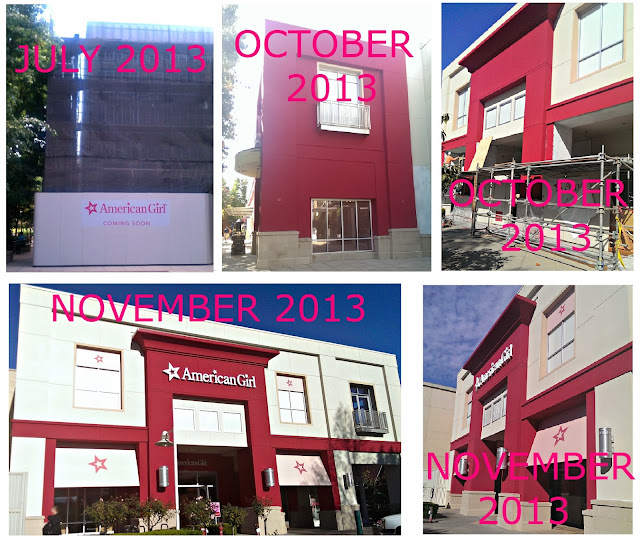 Yesterday I got the chance to tour the store and see what they've been working on all these months.  The store is in soft opening mode to prepare for this weekend's Grand Opening festivities, so everything except the Bistro is fully operational (the Bistro goes live tomorrow).  Here are some photos of the new store.  Enjoy!

The main entrance leads you directly into the historical characters section, but what immediately catches your eye is the beautiful holiday doll display, featuring the Merry & Bright holiday outfit set. Note, I have NOT seen this for sale online, so it must be an exclusive in-store item. The Girl of the Year section is to the right of the entrance. The bookstore and more Historical Character merchandise are to the left of the entrance. Bitty Twins and Bitty Baby are also on the first floor. 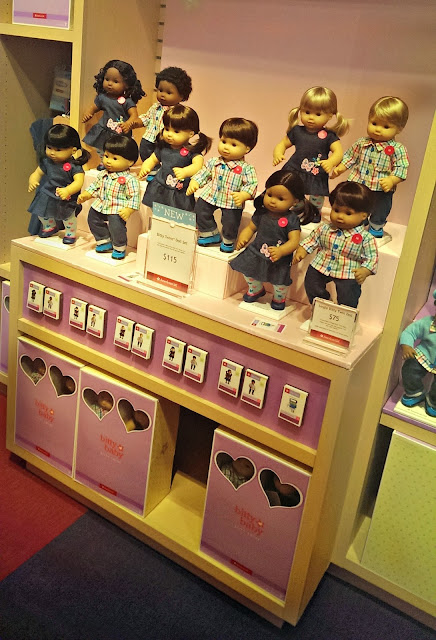 The grand staircase in the middle of the store opens up to the second floor, where you'll find the Doll Hair Salon, American Girl Bistro, Creativi-Tees Boutique, and My American Girl merchandise. The bistro is adorable. I know it's supposed to be for little girls, but I can totally see this place as the perfect venue for a bridal shower or other ladies' night out. It's a lot smaller than any of the American Girl restaurants I've been to, so reservations will be essential. I seriously wanted to buy everything in the store. I don't have much time left: The Pea is growing up way to quickly, and soon I won't have an excuse to shop here!  I'll just have to say I'm buying stuff "for my blog", i.e. for post content. For now, though, I'm  safe.  Even at the ripe old age of 12, The Pea still loves playing with her American Girl dolls, and so does her best friend.  They both came with me to the store, and they were both thrilled to be there.  Visiting a store with your best friend is a completely different experience from visiting with your parents, and they spent a full 2 hours inside the store, ooh-ing and ahh-ing over the displays and merchandise.  They emerged carrying heavy shopping bags, while I emerged with a lighter wallet.  Having an American Girl Store so close by is going to be a mixed blessing! 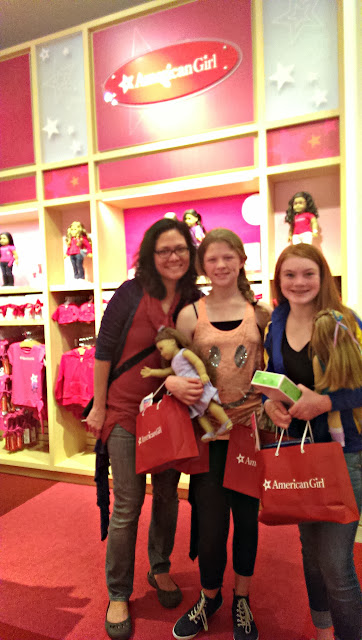 For more photos of the new American Girl Store in San Francisco, check out my American Girl Flickr photoset and my post on Bonggamom Finds!  Also, I've got a couple of American Girl giveaways you can enter: 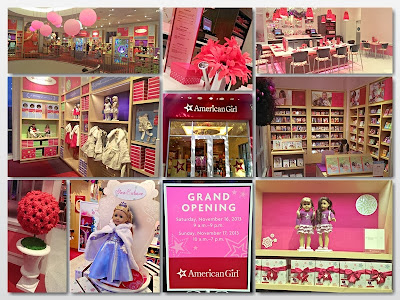 posted on Friday, November 15, 2013
Email ThisBlogThis!Share to TwitterShare to FacebookShare to Pinterest

Wow u are so lucky... My nearest store is some 8000 km away! Thanks for the sharing your pics.

Wonderful!
Now if only they would put one in Philadelphia...the birthplace of America...
:-D
Thank you so much for sharing this review.

Cool! The SF is now the 2nd closest to me, the first being Seattle.

I believe Julie is my favorite, mostly because she is from "my" era! Ok, guess I just dated myself there.....

Have been following you from Doll Diaries since your first pic! Thanks again...Sleeping in Sacramento.

Yes the Merry and Bright outfit is a store exclusive(and very expensive!).

That's one fancy shop. I love American Girl dolls, and this shop seems perfect for a fan!

Wow you are so lucky... My nearest store is some hemisphere away!