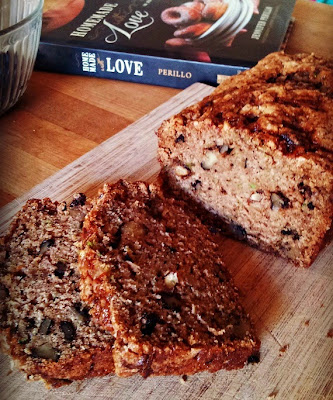 I received a review copy of Jennifer Perillo's cookbook

I've always wanted to make zucchini bread, but for some reason I've never gotten around to doing it. Maybe it's because zucchini isn't a vegetable I regularly buy.  Maybe it's because I had a feeling that it would be a lot of trouble.  Whatever the case, I've never tried making it until now.  I've been leafing through Jennifer Perillo's cookbook Homemade With Love: Simple Scratch Cooking from In Jennie's Kitchen.   Alfie has been hankering for some fruitcake or tea bread, so Jennie's recipe for Zucchini Walnut Muffins jumped out at me, and I decided to go for it.


Here's Jennie's recipe.  It's on her blog, In Jennie's Kitchen, and a similar version is also in her cookbook.  I followed her cookbook recipe but accidentally added 1 cup of sugar instead of 3/4 cup like the recipe said, so I inadvertently ended up follower the blog version of the recipe.  I also decided to use a loaf pan instead of muffin tins (probably because I've had fruitcake and tea bread on my mind).

The recipe says you can shred the zucchini in a food processor, but I don't have one so I grated my zucchini by hand.  Now I know why I haven't made zucchini bread before -- I'm too lazy to go through the trouble of grating!  I really am such a sloth -- I'd probably bake everything from a mix if the from-scratch version didn't taste so much better :)

Here's what my batter looked like before it went into the oven.  Like Jennie said, it's more like a dough than a batter; it's not runny at all, it doesn't seem very moist and it doesn't stick together very well.  Don't worry, the zucchini (you can see the green flecks) will provide plenty of moisture. 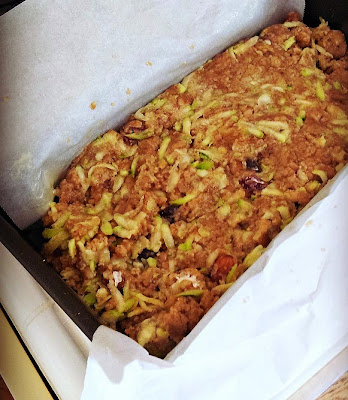 I packed everything into a single loaf pan instead of 2 like the recipe indicates (the cookbook doesn't mention a loaf version, only muffins, so I didn't think to use 2 pans).  As a result, the baking time was well over 1 hr, but it still came out very moist, without any burning, even though it was in the oven for so long  My loaf didn't cut cleanly into slices; there was a lot of crumbling at the edges. But it had a nice, rustic look, and it's absolutely delicious.  I may even decide it's worth the trouble of grating the zucchini -- or I could just convince Alfie to do the grating for me.  See, my food processor doesn't even need to be plugged in! 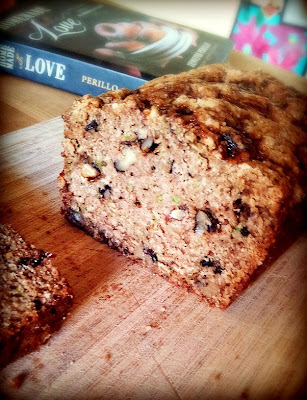 posted on Thursday, May 23, 2013 Labels: recipes
Email ThisBlogThis!Share to TwitterShare to FacebookShare to Pinterest