How to Dissect a Cow Eye 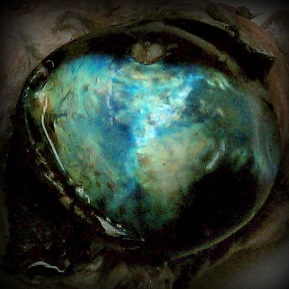 Warning: This post contains graphic, gross, gory photos!  If you feel squeamish at the thought of raw body parts, here is the gist of today's post:  3Po and Jammy dissected a cow's eyeball in class today.  No need to read further.

For those of you who like the gore, read on...

I've been volunteering in my kids' classrooms since The Pea was in kindergarten, and over the years I've figured out which activities to avoid and which ones to fight tooth and nail to sign up for. On my Avoid list: any field trip involving parent driving (car full of hyperactive, screeching kids) or museum chaperoning (no one ever stays close to you).  On my Must Do list:  field trips to the San Francisco Symphony (they play Star Wars for the kids!) and anything involving guts and gore, like pumpkin carving.... and cow's eye dissection.

Man, my kids are so lucky.  I never got to dissect anything until I was a high school sophomore!  I signed up for cow eye dissection volunteering as soon as it appeared on the schedule because I've never seen a real eye close up.  A teacher from our local science museum came to class and brought all the equipment the kids needed.  Here's what the class did today:

The kids were divided into groups of three or four, and given safety goggles, rubber gloves and a paper towel.  Each group had a tray with a paper plate, a scalpel, tweezers and scissors.  The teacher started with a short safety lecture, showing the kids the proper way to hold and use the scalpel, then distributed the eyeballs. 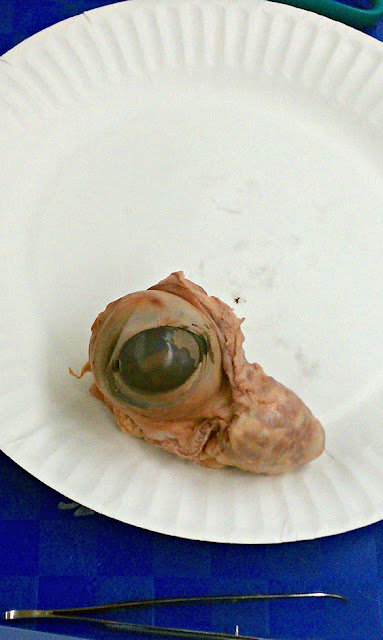 Our first reaction: a cow's eye is humongous.  Half the kids were shouting Cool! and falling all over themselves to hold and poke it, while the other half were shouting Ewww! and refused to go near it.  I wished I had a marker so I could draw a cow's head around the eye to make it less disgusting for the kids who were freaked out.  My groups decided to name their eyeballs: Jammy's group named their eyeball Iris, while Philip's named theirs Fred. 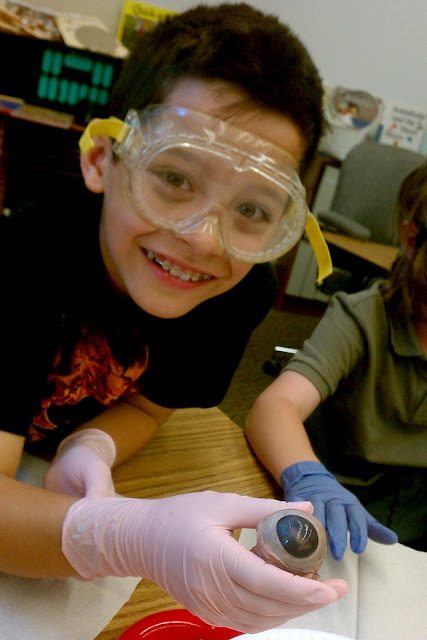 The first thing the teacher told the kids to do was cut away the cornea, the clear membrane lining the front of the eye.  As they started cutting, the kids were expecting blood, but all they got was a clear fluid seeping out: the aqueous humor, which fills out the space between the cornea and the lens. 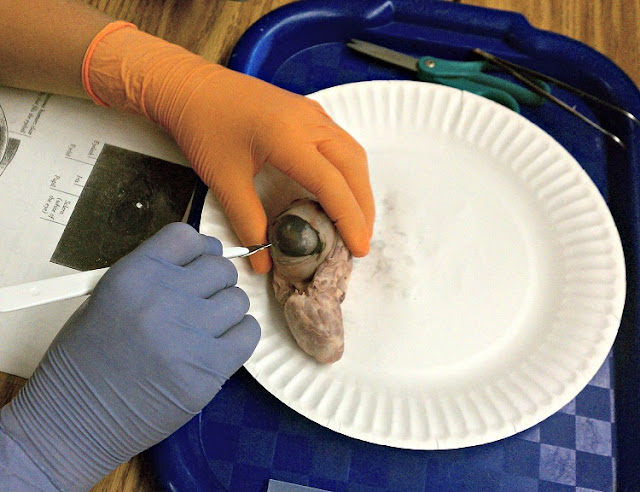 Once you cut all the way around, the cornea lifts right off.  It's thick and rubbery and reminds me of those rubber pop-up toys that fly into the air when you turn them inside out and lay them on the ground. 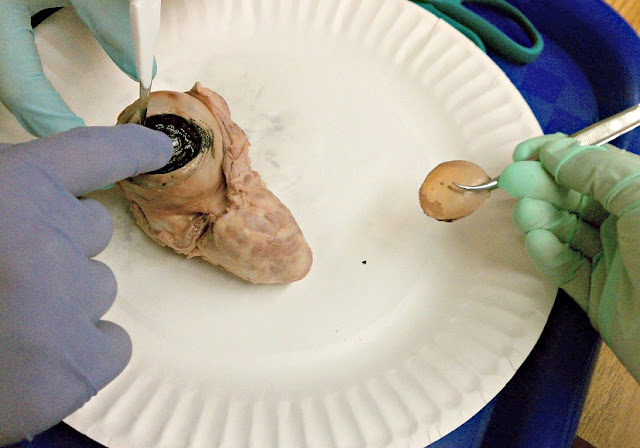 Next, the kids cut away the iris, which is the round black thing on the paper plate that looks like an olive slice or a dark brown donut.  That hole in the middle is the pupil, and it gets bigger or smaller depending on whether the eye is in bright or dim light.  Another fun fact; all cows have brown eyes, hence the color of the iris.  If you had blue or green eyes, that dark brown donut would be blue or green! 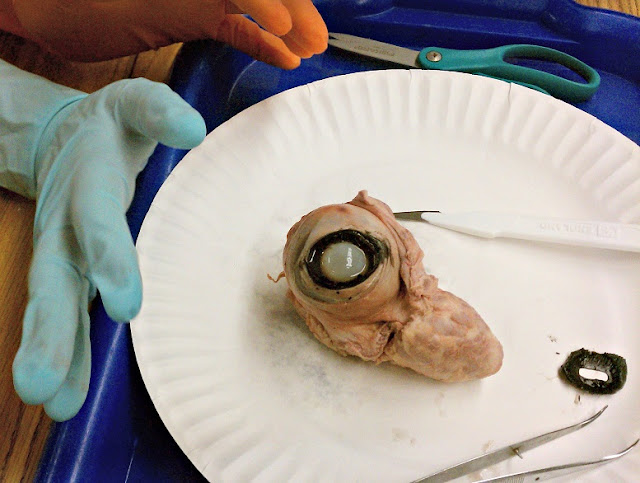 Once the iris was removed, we could clearly see a frosty white sphere: the lens.  I have to admit, at this point I was surprised to find myself shuddering and wanting to say Ewwww. Having that white orb staring at me was a bit freaky.

Once the kids popped the lens out onto the plate, I got over my bout of squeamishness.  The lens is fairly hard, like a marble, and the kids had fun playing with it.  At this point the teacher talked about how images are processed by the eye and why some people need glasses or bifocals. It was so interesting, the kids forgot to play with the lens!  Apparently the lens is what gets clouded over when you have cataracts, and that's what doctors replace when they do cataract surgery.  Amazing. 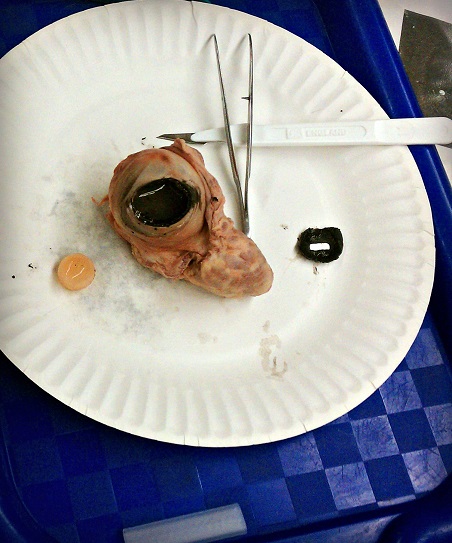 Once the lens was gone we were able to see the vitreous humor, a jellylike substance called the, which fills up most of the eyeball.  I offered $100 to any kid who would drink that stuff but had no takers.  Apparently 4 or 5 years ago some kid actually put the cow's eye in his mouth, so the Department of Education banned schools from using fresh eyeballs.  The ones we used were preserved with some chemical, and it took schools a while to find them, which is why The Pea and her classmates had to settle for dissecting a squid when they were in 3rd grade. 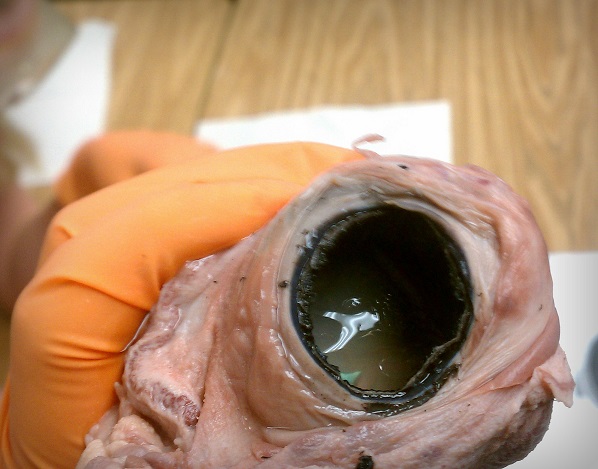 Next, the kids were instructed to scoop out the vitreous humor, which left the eyeball completely hollow.  We were surprised to find the inside lining of the eyeball was a beautiful iridescent turqoise!  At first we though the preservatives had discolored it, but that's really what it looks like. 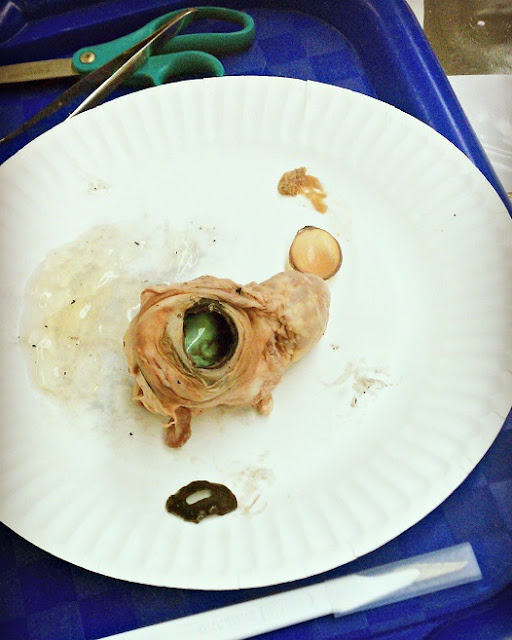 The kids sliced down the sides of the eyeball and turned it inside out so we could get a closer look at the inside of the eyeball.  Finally, the teacher asked the kids to reassemble the eyeball, and the activity was over. The whole thing took just over an hour (note:I'm only describing the dissection procedure here, but the teacher stopped between each step to explain in detail what they were doing and teach them about each eye part, its purpose, etc..). 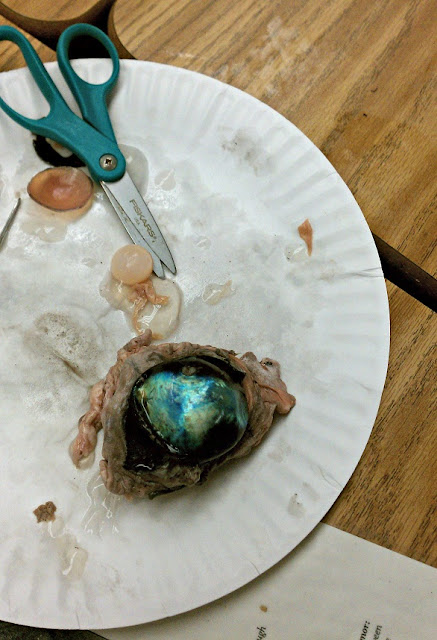 The cow's eye dissection was definitely an activity that both kids and parent volunteers loved.  Even the kids who started out squeamish were poking and prodding and hacking away by the activity's end.   Afterwards, the other parent volunteers and I looked at each other and mouthed a single word: AWESOME. 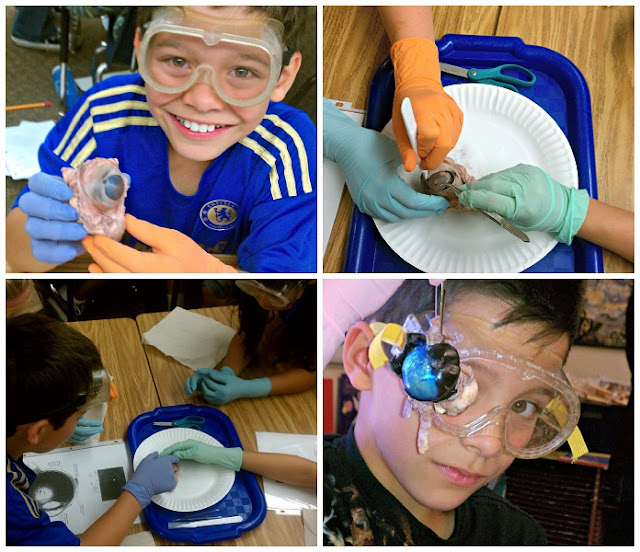