Hangin' with 3Po: How to throw a Rock Climbing Birthday Party 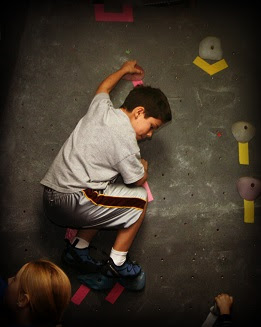 What's harder than climbing a mountain?  How about planning two boys' birthday parties in a single weekend?  Jammy had his 9th birthday party on Friday, and 3Po had his on Sunday, but it wasn't as tiring as it sounds, because I outsourced the location and activities to a trampoline park (for Jammy) and a rock climbing gym (for 3Po).  Just like the twins themselves, the two parties had striking similarities --  the celebrants, most of the guests (and therefore the presents), the birthday cake -- but each one was different, and special in their own way.  Here's how we celebrated 3Po's birthday:

Invitations
I found a photo of 3Po at the top of a free-climb wall, taken last summer at a playground in Wales, and used it to create a custom invitation on Evite.  I decided against paper invitations, since Evite is so much more convenient (and cheaper!) than printing and mailing out paper invitations. Birthday Cake
Like his brother, 3Po wanted a chocolate chip cookie cake.  To decorate the cake, I made a rock climbing wall out of rice krispies, and stuck in M&M pieces and Wilton candy melts to make hand and foot holds.  Once again, our 2012 Olympic Lego minifigures made an appearance as gravity-defying rock climbers (with the help of a few strategically placed toothpicks!). Activities
Our main party activity was Scrabble and Go Fish... NOT!  As soon as each kid arrived, the instructors suited them up with climbing harnesses, climbing shoes and safety instructions.  Everyone was literally climbing the walls in their eagerness to get started.  Alfie and I were taught how to belay the kids 30 minutes before the party so we could help out.  There were only 2 instructors and 18 kids, so 2 extra adult belayers meant the kids didn't have to wait too long for a grown-up to belay them while they climbed the walls.  While waiting for a grown-up, the kids were allowed to free-climb the walls up to a certain height (marked clearly with a red line), and they were allowed to run around and play upstairs in the free climb room, so no one had to sit out any of the fun. Once the kids had gotten the hang (get it, hang?!) of climbing, the instructors organized a couple of games.  While everyone else was in the party room having snacks and cake, they hid some pennies in the free climb room, and the kids had to climb around and search around for the pennies.  They also had a Lava Wall game, where the kids were challenged to climb across the whole room without falling onto the red mattresses below (the "lava").  Finally, the kids went back to the main climbing wall and lined up for a turn on the rope swing.  A huge rope was suspended from the ceiling and the instructors swung each kid, one by one, and had them let go and flop onto a huge mattress. A rock climbing party does have its challenges, because it requires specific physical skills, and every child is different. Some kids had already done rock climbing before; for others, it was their first time.  Some kids are natural born monkeys, and will clamber around without hesitation, while others are more timid, or uncomfortable with heights, or not as physical.  Alfie and I were gently encouraging; we were able to get several of the first-timers get out of their comfort zone and successfully reach the top of the wall, and it was wonderful to see them light up with that sense of achievement.  Some never made it to the top, and one or two didn't even want to try, so we didn't pressure them.  That's where the challenging part comes in:  boys will be boys, and I did have to remind some of the monkey-boys that it was okay if some of their friends didn't want to climb. 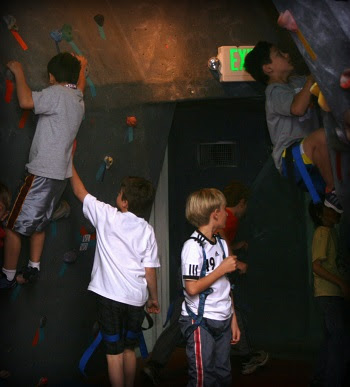 Fortunately, 3Po and his friends are good kids at heart, and there was a lot of ground-level fun (games of tag, mattress jumping and so on), so the non-climbers didn't feel left out.  I also prepared a couple of party games so everyone could have a bit of fun, whether they scaled the walls or not.  I filled a small jar with pebbles and asked each boy to guess how many pebbles were in the jar.  The winner (his guess was short by just 1 pebble!) won a rock candy lollipop.  We also had a marshmallow building challenge, which turned out to be a huge hit. The boys formed teams of two, and were given a paper plate and 20 mini marshmallows.  I let them use as many toothpicks as they needed to build a structure (I called it a "mountain" to stay consistent with the rock climbing theme!).  I gave them a 5-minute time limit, and the tallest structure that could stay standing was the winner.  It was a great exercise in structural engineering, as the boys quickly realized that a tiny base with a tall antenna would quickly topple over!


Snacks
I had originally intended to go with the tried-and-true party staple, cheese pizza, but I realized I'd either have to get it delivered ($$) or leave the party midway to pick it up (too stressful), or figure out some way to keep it warm (too complicated).  I went for easy-peasy fruit kabobs (grapes and pineapples), sausages and cheese cubes on a stick, and popcorn.  I did feel the yearning to come up with some rock-climbing themed snacks, but after hosting two birthday parties in three days, the thought of preparing muffins that looked like pebbles or pizza boulders made me want to weep.  I decided to keep things simple, and consoled myself with my awesome rice krispy wall. 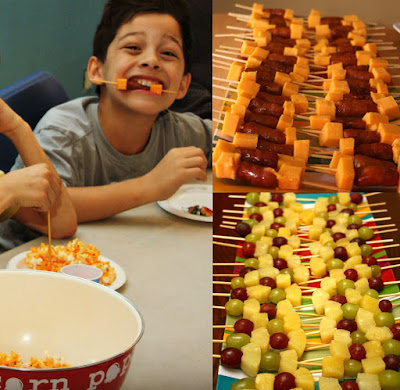 Besides, the kids didn't mind.  They gobbled up the food without caring that it had nothing to do with rocks.  The whole themed party business is usually a parent's hang-up (get it?  haha)  anyway.   3Po and his pals certainly didn't need rock-shaped muffins to have a rockin' time (I'm killing it with the rock climbing puns!) I don't even know how I ended up here, but I thought this post was great.

I don't know who you are but definitely you are going to a famous blogger if you aren't already ;) Cheers!

Thank you for these ideas. I love the cake. I was wondering how to theme a rock climbing cake without calling Buddy from Cake Boss.