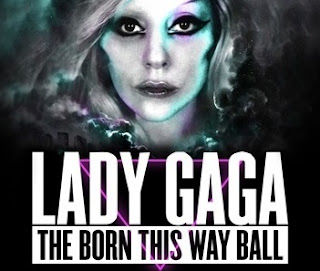 Last night we took The Pea to her first-ever concert: Lady Gaga's Born This Way Ball at the HP Pavilion in San Jose.  As far as first concerts go, this one turned out to be a Monster one, thanks to concert sponsor Skype, and I'm hoping she'll forgive the lameness of the fact that she attended her first concert with her mom and dad, and focus on what an amazing time she had.

To start with, we had a pretty swanky pre-concert experience.  As guests of Skype, we had access to Skype's exclusive suite, which had comfy lounge chairs, free drinks and yummy nibbles like sushi, sliders, mini corn dogs, and antipasti.

The Pea got to gorge on cupcakes, fill goody bags with jelly beans and M&Ms (printed with the Skype logo!), make her own ice cream sundae, and get her face painted with a Gaga-style lightning bolt. 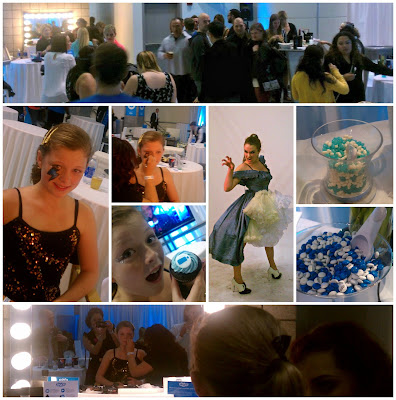 Walking around the HP Pavilion before the concert was almost as fun as the concert itself.  As you  might expect at a Lady Gaga concert, half the crowd was wearing some kind of outlandish makeup, wig, bling, costume or all of the above.  I saw replicas of every outfit Lady Gaga has ever worn (including the famous meat dress!) and then some. It's amazing to the range of Little Monsters out there, from the youngest tweens to the oldest grannies.

The Pea even got to pose with some of them!

One of my favorite costumed fans was an old drag queen dressed to the nines like Marie Antoinette, complete with gigantic wig and white-out complexion.  She really stood out in the crowd; even Gaga saw her and gave a shout out during the concert!

I'm so glad The Pea convinced me to wear one of her tutus, an ostrich feather hairclip and the highest heels I own.  It was nowhere near the level of awesomeness of Marie Antoinette, but bongga enough for me to feel like I belonged. 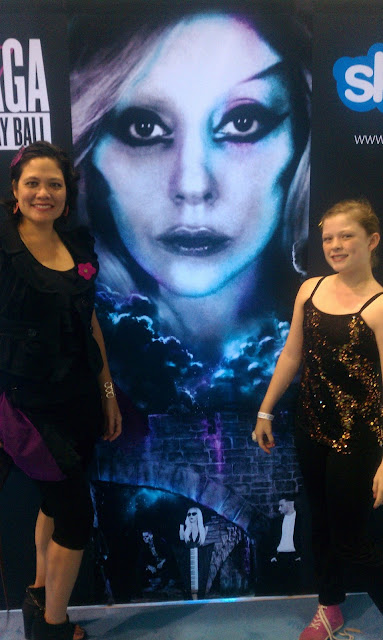 The concert was fabulous, and Skype gave us GREAT seats in the 4th row.  They were slightly to the right, but that actually worked out well because the tickets nearest the stage were standing room only (i.e. the Monster Pit), and there is no way I could have stood and danced through the whole concert in my 4-inch heels.  Because of the Monster Pit, center section tickets with actual seats were quite far away from the stage, while side seats were very close to the catwalk that cut across the center of the Monster Pit, so we could actually see the performers' faces, and I could capture close-up shots of Gaga like this:

As a stage production, I don't think any other concert out there can match it (possible exception: Madonna concerts, but I've never seen one so I can't judge).  Gaga wore a different costume for each song she sang, and each one was as over-the-top and outlandish as the next (the costumes for the US leg of the tour were designed by Versace).  The dancers took on all kinds of roles, including male strippers, a same-sex married couple (1 man dressed in a tux and another man dressed in a white bridal gown), male strippers and Jesus.

The set consisted of a huge castle with moving turrets and multiple levels.  It was quite magnificent, and I can just imagine the amount of work involved to set the whole thing up and take it down, just for a one-night concert.  Throughout the concert, various props paraded on and off the stage for Lady Gaga to use in her numbers.  Here are the ones I can remember:

Oh, and let's not forget the giant pregnant belly and vagina that Lady Gaga emerged from to sing Born This Way.

Best of all, Gaga stayed true to her message of individuality, equality and tolerance.  Here's a video of Lady Gaga telling the crowd to always be true to themselves:


Here's another video of one of my favorite numbers, a solo with Lady Gaga playing the piano and singing a slow version of Born This Way:


(You can check out more videos I took from the concert here and here ).

Many people say your first concert is special, and you never forget it.  Well, I've actually forgotten my first concert.  I think it was Hall & Oates, in the mid-80's.  I was up in the rafters and watched everything behind a chain link fence.  I enjoyed it immensely, but it doesn't quite compare to the extravaganza that was The Pea's first concert.

I have a feeling she won't be forgetting this one.


Thank you Skype for providing tickets to The Born This Way Ball for the three of us!  Click here to see how Skype is enabling concertgoers everywhere to share every magical concert moment.

That Marie Antoinette was not an "old drag queen" Just because someone dresses up at a concert doesn't make them a drag queen. Just FYI.

She was definitely an elderly man dressed as a woman, so by definition she was an old drag queen, whether for that night only or every night. FYI I used the phrase "old drag queen" with no scorn whatsoever, only respect and admiration. I loved her style and confidence!