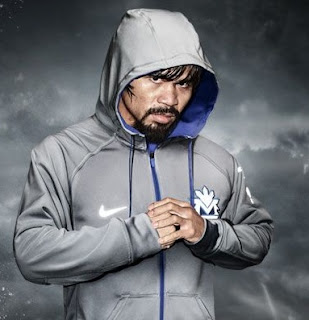 What does Manny Pacquiao have in common with Michael Jordan, Michael Johnson, Charles Barkley, Tiger Woods, Lance Armstrong, Wayne Rooney, Cristiano Ronaldo, Maria Sharapova and Serena Williams?  Yes, they're all top athletes and they are (or were) the best at what they do, but they are (or in Lance Armstrong's case, used to be) Nike endorsers. Nike signed Pacquiao back in 2006, but I had never actually seen Manny Pacquiao apparel in stores until today.


This afternoon I took the boys out shopping for some new shoes, and since wearing Nike shoes is 3Po's thing, shoe shopping always involves a visit to the Nike Outlet store.  Imagine our surprise when we saw a whole section of the store dedicated to Manny Pacquiao merchandise!  The collection was prominently displayed, right behind the 49ers merchandise, just as you enter the store.  Manny's logo (his initials, MP, with the Filipino flag's sun rising from the center of the M) is on all kinds of athletic apparel, including shirts, shorts, track pants and jackets. 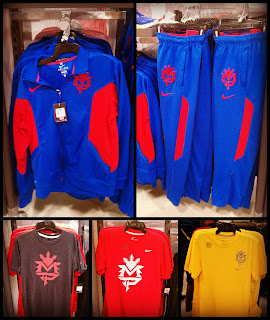 They even have athletic shoes with the Manny Pacquiao logo!  The ones I saw (stupidly, I deleted the photo I took, so I'll have to take another one when I go back) were bright blue, with red and yellow accents, and the logo was on the shoe's tongue.  I wonder if Air Mannys are now the cool footwear in the Philippines?

When I think of it, I don't know why I was surprised.  After all, Manny is world famous. He's definitely the most well-known Filipino in the world (can any of my non-Filipino friends name the current Filipino president?  No, it's not Cory Aquino!).  His recent defeat to Juan Manuel Marquez hasn't diminished his demigod status in the Philippines -- and it looks like it hasn't decreased his ability to sell shirts, either.  After all, who but a globally recognized figure gets his own caricature tshirt? 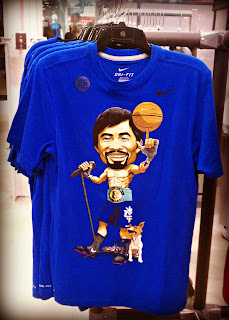 I must have succumbed to that typical Filipino impulse to belittle anything Filipino and assume no one, other than a Filipino, would be interested in proudly declaring themselves to be a Pacquiao fan.  I need to swallow my cynicism and be happy that we have a Filipino that the whole world can be proud of, one who is so well known that he can sell millions of dollars worth of merchandise along with the world's best.

(There's a mean little voice telling me that the merchandise was at an outlet store, on sale.  And that losers like Mitt Romney get caricatured shirts too.  But I'll drown it out with a resounding "Go Manny!").