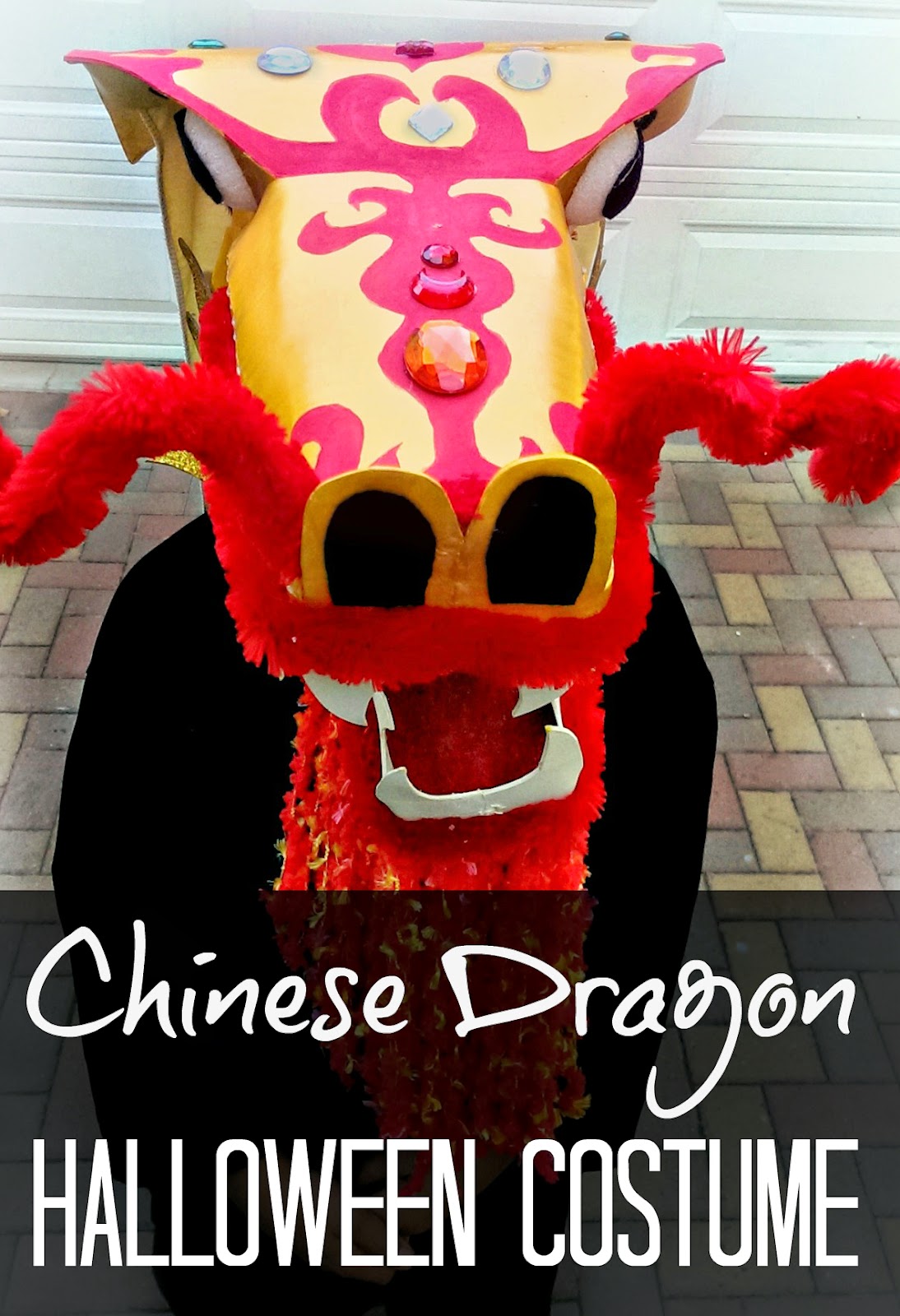 I don't mind spending on Halloween costumes -- it's my favorite holiday, after all -- I try to encourage the kids to alternate between buying a costume one year, and then making or assembling it the next. I've been kind of lax in enforcing it with the boys, so this year I redoubled my efforts to get them to make their own costumes, and save a few bucks in the process.  As it turned out, I think I spent more on raw materials for this year's costumes than if I had just bought costumes from a store.... but we did have a great time making the costumes, and they ended with kickass costumes that will blow those generic store-bought costumes out of the water!

This year, 3Po wanted to be a Chinese New Year Dragon.  I know people spend thousands of dollars on the elaborate getups seen in Chinese New Year parades, so I told 3Po not to get his hopes up. I searched the internet, but found mostly paper plate or cardboard box dragons that were too crude for 3Po's standards.  I finally found a video tutorial for an amazing looking dragon. The crafters in the video were making a multi-person dragon for a parade, and they used a lot of industrial power tools, but I thought I could simplify it and adapt it to our needs.  The video did not have a pattern, so I created my own.

First, I created a doll-sized prototype so I could figure out what each piece would look like and how it would all fit together (check out my pattern and instructions for an American Girl doll Chinese Dragon mask). Then I enlarged the pattern to fit 3Po's head (I had to tweak the proportions a bit to make them fit a human!).  This took way more of my time than any sane person would allocate, but I had a lot of fun doing it.

At this point, I decided 3Po ought to start doing some of the work in making his costume.  He helped me cut out the foam pieces, paint them, and hot glue them together.  Here's a rundown of the most important parts of the costume:

Head
The head is made entirely of yellow foam, with a few bamboo skewers glued to the inside to keep the head from collapsing. 3Po and I painted it metallic gold.

Eyes
I bought a styrofoam ball and sawed 2 ends off (about 1/3), then 3Po glued on black felt irises. 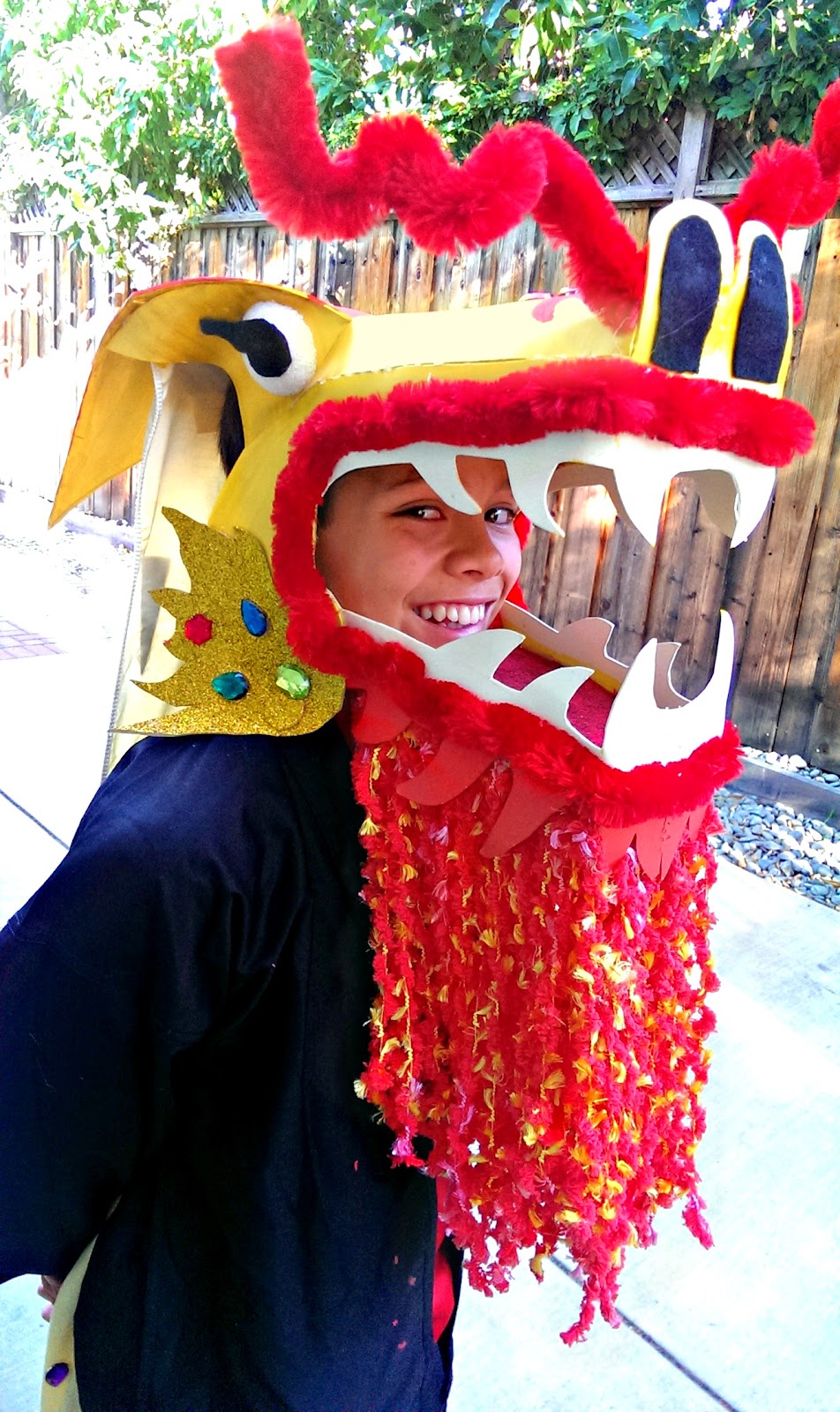 Nose
The nose is foam, with black felt nostrils glued on.  The fire coming out of the nose is a giant red pipe cleaner.

Mouth
To make the lips, 3Po glued a giant red pipe cleaner around the outline of the dragon's mouth.  The tongue is foam, painted red (the top coat is a glitter red). The teeth and part of the chin hair are foam, painted white and orange, respectively.

Beard
To make the beard, we hot glued strands of fuzzy, multicolored yarn. 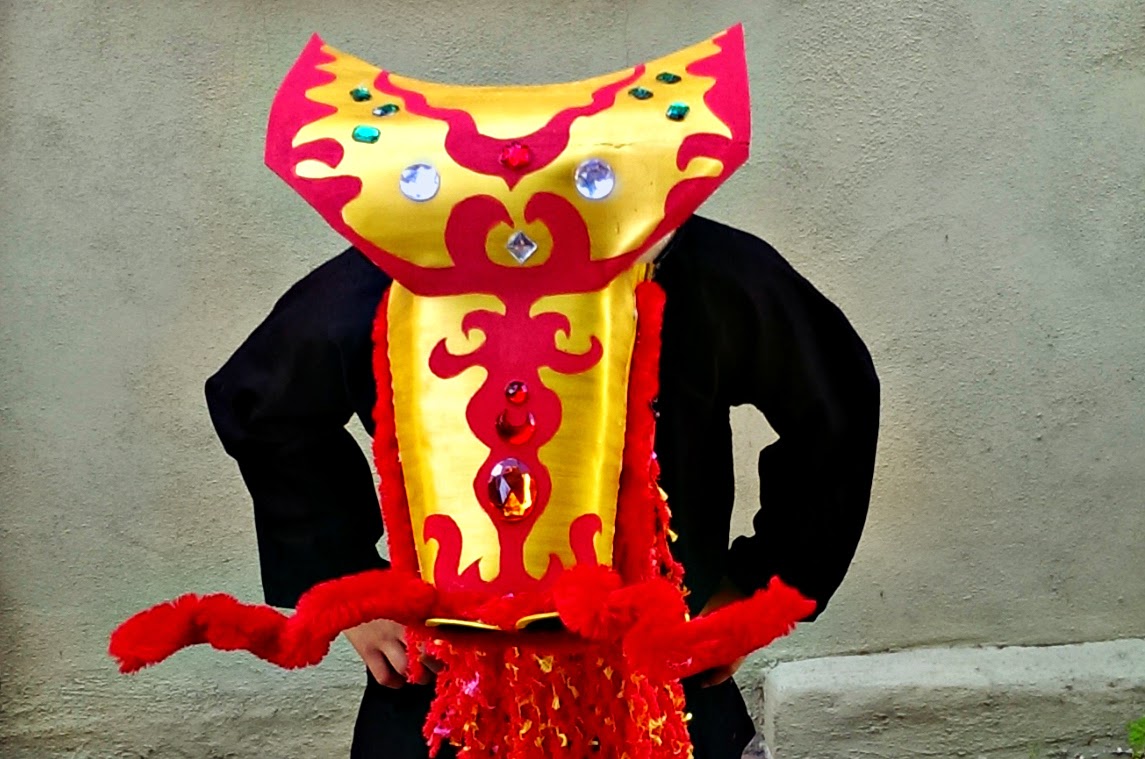 Decor
We painted red swirls on the top of the dragon's head, and 3Po glued jewels onto the nose, head, and cheeks.

Tail
At first 3Po wanted a tail that stuck out straight behind him, so it would look like the dragons you see in parades.  Alfie and I convinced him that having a tail that stuck out 3 or 4 feet would not only be uncomfortable to wear (we'd have to design some kind of harness to strap on his back/waist and attach a pole to lift the tail up), it would also be a nuisance to everyone around him (imagine trying to trick-or-treat!). So he compromised with a tail that attached to the dragon mask and draped straight down.  We cut up an old yellow bed sheet, then 3Po glued on jewels, glitter foam scales, and a fringe at the bottom.  The fringe and jewels turned out to be important because they gave the tail some weight, which allowed it to fall straight down. The weight of the tail also counterbalanced the weight of the beard.

Fortunately, we still have their cousin's old black karate uniform in our costume bin, so 3Po will wear that under his mask and cape. 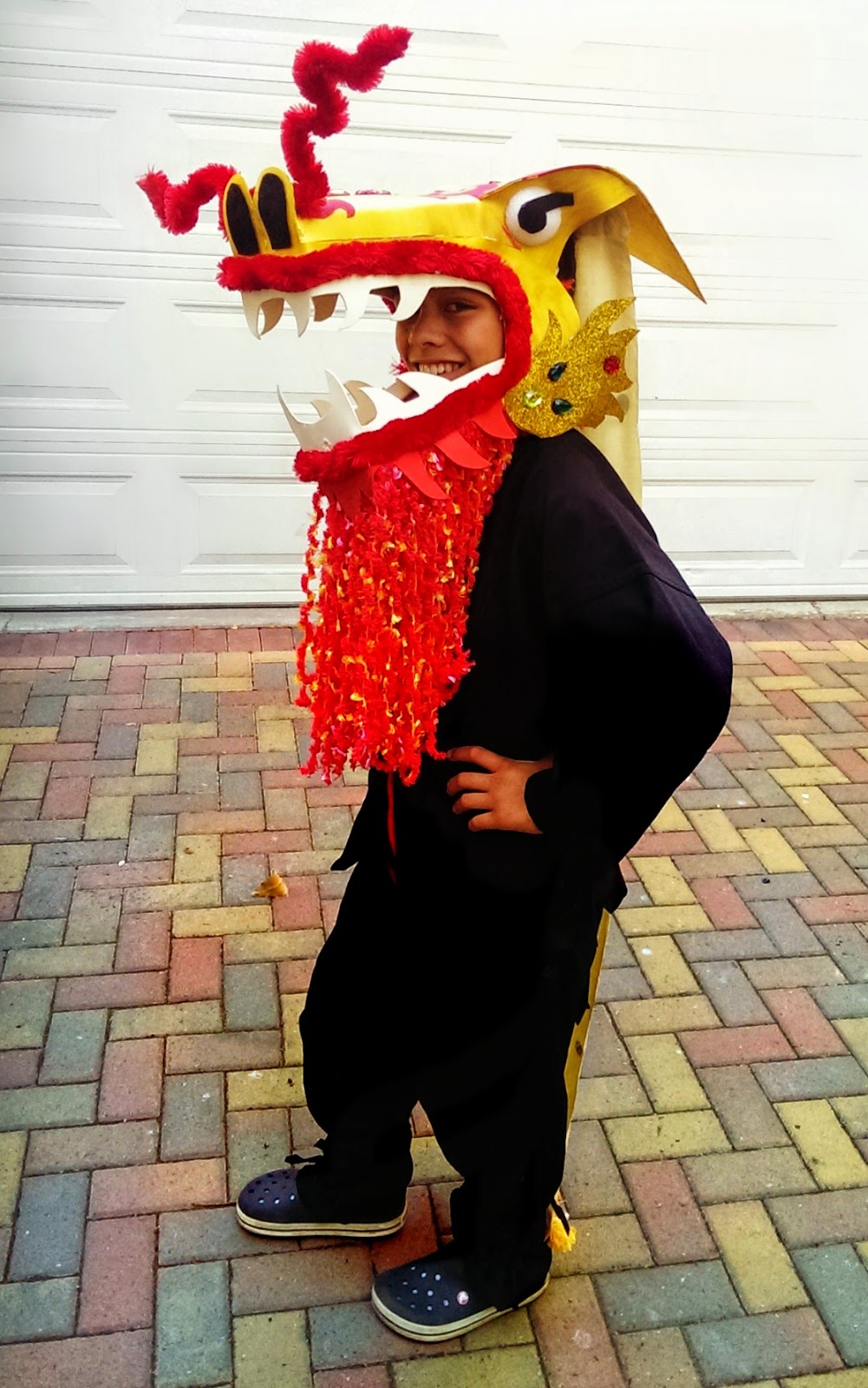 The resulting costume is gorgeous. It's probably the most striking, most original costume he's ever worn.  He's worn it for five minutes at a time, and it doesn't show any signs of falling apart.... but who knows what will happen on Halloween night!  I just hope he doesn't get sick of wearing it and leave me dragging along a gigantic dragon head all night.