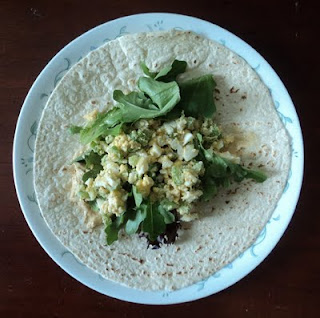 I love egg salad, but now that I'm hell-bent on achieving goal #1 on my 40x40 list, I'm trying to be more aware of what I put into my body. So I bought some low-fat mayonnaise to add to my egg salad today.

But as I was taking the ingredients out of the fridge, a tub of hummus caught my eye, and I thought, why not? Hummus is low in fat and high in protein. It's yummy and filling. It's far more nutritious than mayo, and gives just as much taste and texture.

Mince the celery.
Chop the egg.
Mix celery, egg and hummus together.

You can season with salt and pepper if you want, but I found it tasty enough without any other seasoning. I scooped the egg salad on a bed of lettuce and wrapped it in a tortilla. If I had had any tomatoes in the house, I would have added them to the dish.