The possibilities in a square of paper 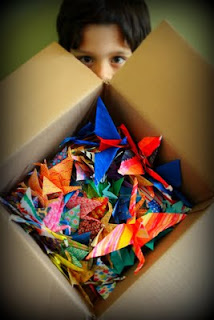 It can also become a way to help the people of Japan. The kids and I spent about a week folding origami cranes for the Paper Cranes for Japan project. For every paper crane sent in, up to 100,000, the Bezos Foundation donated $2 to Japan relief efforts, for a total of $200,000. I had never folded a crane in my life, but it was such a good project, I knew I had to try. Now I don't think I could forget how to fold a crane if I tried. The kids and I folded and sent 111 cranes. I helped the kids in Jammy's class fold 40 cranes, and joined other parent volunteers at lunchtime to help the rest of the kids in their school fold over 2,000 cranes.

Last I heard, Paper Cranes for Japan hit their goal of 100,000 paper cranes on April 11 , and cranes are still pouring in -- over 460,000 as of April 15! Studentsrebuild.org reports that they have received cranes from 49 states and over 19 countries. How cool is that?

This post and photos were inspired by the Photo Hunt theme of the week: Square. Feel free to leave links to your own Photo Hunt entries below.
posted on Saturday, April 30, 2011 Labels: Photo Hunt
Email ThisBlogThis!Share to TwitterShare to FacebookShare to Pinterest