With almost 10,000 casualties from the earthquake and tsunami, and more to come, with the threat of radiation from Japan's ravaged nuclear reactors, people will have to fold more cranes than ever. It won't bring back the scores of children buried under the rubble, but the crane is such a powerful symbol of hope in Japan, and hope is something they need just as much as food, water and shelter. People are folding cranes, sending them to Japan, and selling them to raise money.

How can we get involved? Make a donation to the Red Cross, Unicef, Global Giving, or other humanitarian organization (Here a link to a HuffPost article with a list of resources). If you want to send hope as well as help, fold a paper crane and send it to Paper Cranes for Japan (or post a photo of your cranes on their Facebook page); they'll make a donation for every crane received. Even if your children are too young to fold a paper crane, they can make a virtual crane at Cranes for Kids and send their message of hope and healing to the people of Japan.


This is the first crane I've ever folded in my life. I folded it ten minutes ago, took a photo of it five minutes ago and uploaded it ten seconds ago. 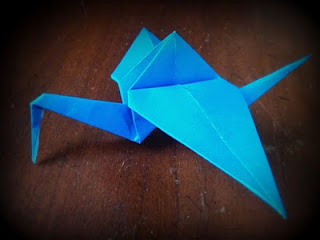 Every time I've tried in the past, I've gotten hopelessly bogged down in mountain and valley folds. I lost interest long ago, but the events in Japan inspired me today. Thanks to the wonders of YouTube, I found a video that explains how to fold an origami crane in 6 minutes.

If like me, you've never folded a crane before today, maybe it's time to learn.

Thanks for sharing your inspiration. This is an activity that you can do with the kids that will actually mean a lot to someone else.