I've always thought of paella as a Special Dish. When I was a kid, it was too special for me to even try; the only kind of paella my family (and the whole of the Philippines) ever prepares is full of shellfish: mussels, shrimp, clams, all things I'm allergic to. Even when I moved to the US and discovered Paella Valenciana (in Boston's best tapas restaurant ev-ahh), it was still a Big Deal: if you wanted it, you had to wait 40 minutes for it to cook. To add to its mystique, one of the key ingredients in paella is saffron, the world's most expensive spice by weight. To me, paella was kind of like that tall, dark, handsome, rich, exotic stranger that you can only have in your dreams. Trying to make it myself never even crossed my mind.

Until I picked up our school's annual auction catalog and saw a Paella cooking lesson up for bids. The class was being offered by a parent at our school who comes from Spain. Beatriz learned to make paella when she was a little girl and has been making it all her life. She says it's such an easy, nutritious, delicious dish that she cooks it for her son at least once a week. Reeeelly? Ordinary people can cook paella? Sign me up!

And that's how I found myself with a group of 10 other parents on a cold, rainy November evening, glasses of alcohol in hand, huddled around a stove watching Beatriz cook. She started out by giving us a printout of a Chicken Paella recipe.... then told us she doesn't use a recipe. I respect that, I never follow recipes either. She taught us the way her grandmother taught her mother and her mother taught her, the way countless generations of Spaniards have learned to cook Paella -- by watching, by doing. So without further ado, here is how Beatriz makes paella:


1) Saute chopped onions in olive oil until clear; then add tomato sauce and simmer. This aromatic base is called sofrito, a common base in Spanish cuisine; we Filipinos call it ginisa. You can add garlic if you want. Mmmmm....when you start with onions, garlic, tomatoes and olive oil, how can you go wrong? 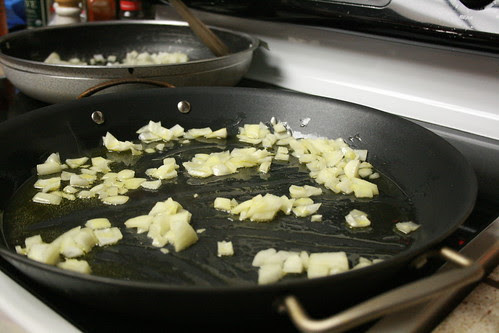 2) Add vegetables, the more the merrier. Beatriz used red, green and yellow peppers, green beans and peas. Here's one place where it's easy to "cheat" if you don't have time; you can buy them frozen and just dump them into the pan. 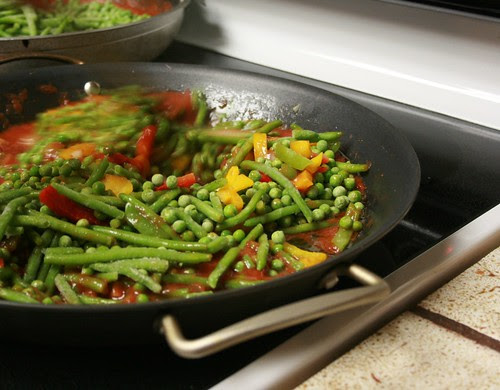 3) Add meat. Beatriz used chopped chicken thighs, but you can pretty much use whatever you want: seafood, pork, chorizo sausage, duck, even snails. I was surprised to find that she doesn't brown her meat first -- and many paella recipes do -- but, hey, this makes it so much easier, and I can't argue with the final result. By the way, I don't have a photo for this step because I don't want to gross you out with my close-ups of raw chicken.


4) When the outer layer of the chicken has cooked (it doesn't have to be cooked the whole way through), add raw rice -- a mug full is plenty for five or six people -- and water (2 cups of water for every cup of rice). I read on Wikipedia that most paella chefs use bomba or calasparra rice, but Beatriz said she uses regular old medium-grain rice. 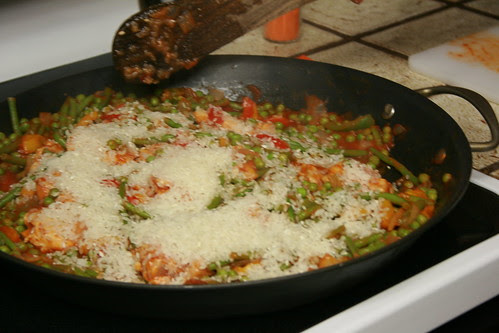 5) Add saffron (or a paella seasoning mix with saffron and other spices, that you can buy at Mexican groceries or Spanish food stores) and salt, which gives the paella its distinctive yellow color. For an even more vibrant color, many Spaniards like to add Colorante Alimento, or Paella food coloring. It's not easy to find here in the US, and when you do it's a lot more expensive than in Spain, so Beatriz smuggles it by the caseful when she goes home to Spain. 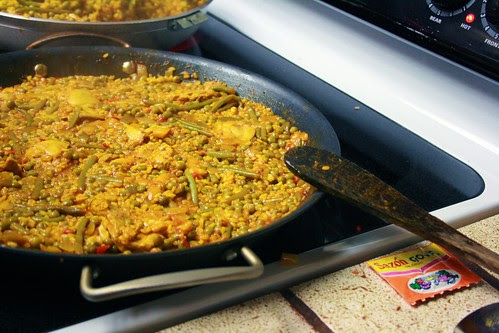 6) Once the water starts boiling, reduce the heat to medium-low and let it simmer. 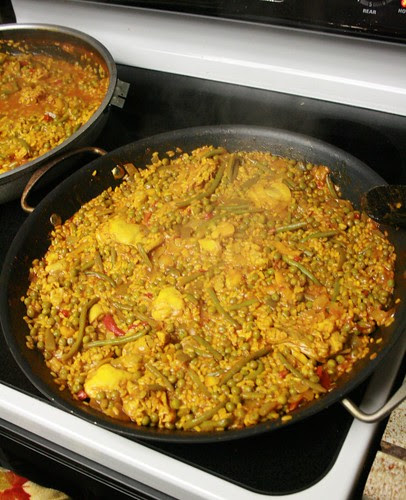 7) When the rice is cooked (about 20-25 minutes), turn the heat off, cover the paella pan and let it rest for 10 minutes. Serve with a wedge of lemon. 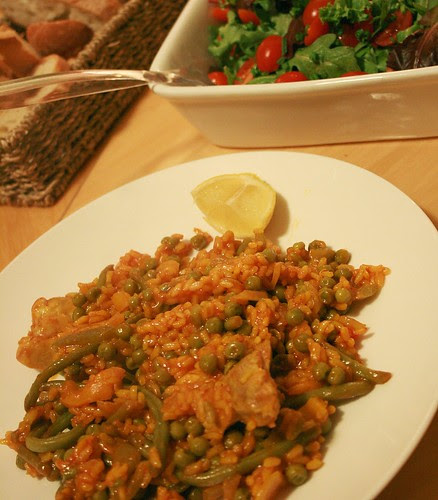 Throughout the session, Beatriz offered her tips and tricks for making a great paella:

Don't overfill your pan. The mixture should be about 2 inches below the rim of the pan.

An evenly distributed flame gives the best results -- which means the four-inch circle of flame on your gas stove is not ideal, and you have to keep jockeying your pan around the stove and stirring the mixture. You can actually buy fancy-shmancy paella burners with concentric circles of tiny flames to produce the ultimate uniform heat, and they're perfect for parties (Beatriz actually has one but we couldn't use it because it was a rainy evening), but they're pricey.

Don't leave the kitchen. You need to be close to the paella so you can stir it and move your pan around and make sure the heat isn't just concentrated in the middle. Bored? That's what wine and good friends are for.

Don't skip the 10 minute resting period! This is essential for the paella to develop that yummy thin layer of toasted rice at the bottom of the pan. Hey, you've waited your whole life for this dish, you can wait 10 more minutes.

We were all amazed at how easy it was!


I came back from that class full of confidence -- and then life got in the way, and three weeks after the class I still hadn't attempted to make it myself. I decided to take the bull by the horns and make a vegetarian paella. I omitted the chicken, and used some vegetable stock instead of water. Like Beatriz, I used red, green and yellow peppers as well as peas, but I left out the green beans and threw in some artichokes. My anxiety level was pretty high, especially when I tasted the rice at one point and found myself with a mouthful of half crispy, half chewy grains, but I let it simmer a bit longer and maintained a semi-constant stir and a watchful eye.

I don't think I quite achieved the toasted rice layer at the bottom, but the rest of my paella looked just like the real thing: 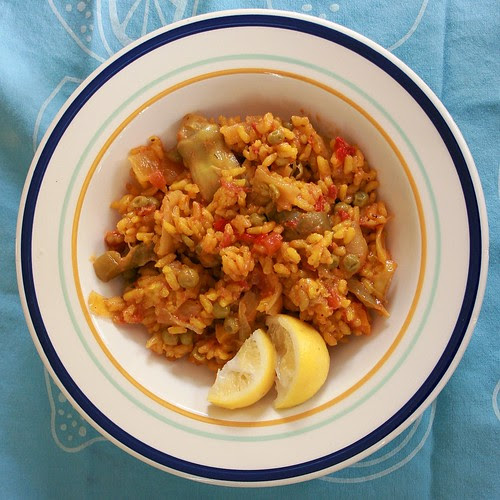 And Santa Cachucha*, it was delicious! The kids inhaled this dish, and Alfie, who isn't a big paella fan, gave it a big thumb up (he's reserving the other thumb for when I make it with chorizo because based on the veggie version, he thinks it's going to be out-of-this-world yummy).

I'm definitely adding paella to my list of go-to dishes, and I might even bat my eyelashes and ask for a paella burner, pretty please, the next time I find myself on Santa's lap. Who would have thought that the dish that used to intimidate me so much would end up being so easy to make? It looks like the only thing special about Paella (aside from the taste, of course) is the enjoyment it brings when you cook (and eat) it together with family and friends. 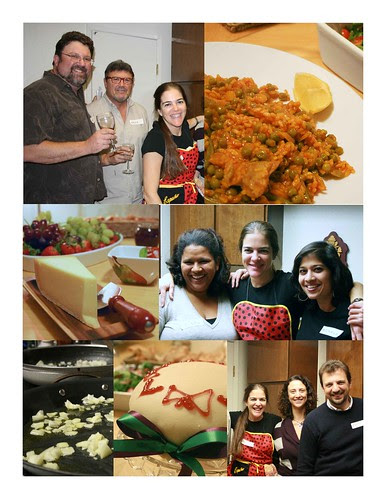 *I thought Santa Cachucha would be more appropriate than Holy Cow, since we're talking paella here, even though it's not a literal translation. Maybe Santa Chuleta would be better, but Chuleta is a pork chop!
posted on Thursday, December 09, 2010 Labels: about me, childhood memories, food, recipes
Email ThisBlogThis!Share to TwitterShare to FacebookShare to Pinterest

Thank you for sharing! I'm going try this too!