The North Pole Express has arrived!

What's the first item of Christmas decor to come out in your household? The tree? The stockings? The garlands? The lights? The nativity set?

At our house, it's a toy train. 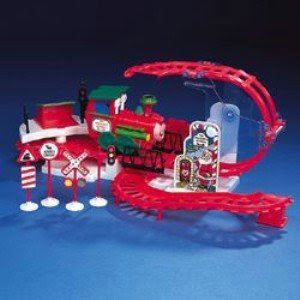 The kids begin clamoring for The Train as soon as the Thanksgiving turkey has been eaten; if a hurricane swept through our neighborhood and tore our decor up in shreds, you can be sure this is the first thing the kids would run to save -- assuming Alfie or I don't get to it first.


I know, it's not your classic holiday train set . It's made of hideous, shiny plastic, and all the time the train runs it emits deafening train noises (Here's a tip: if you feel your sanity is in jeopardy, cover the speakers on the train with some tape. It won't eliminate the noise, but it will deaden it). But this train takes the place of honor on our living room mantelpiece, and gets taken down for a demo any time a friend comes to visit. And even though it's "just" a kids' toy, guess who spends the longest time watching it go? The parents who come to pick their kids up!

We've had the Kurt Adler North Pole Express train set almost as long as we've been a family. I think we bought it in 2002, when The Pea was two years old. It was featured in one of the original Baby Einstein DVDs, and when Alfie saw it, he knew he had to have it. He's mad about trains, the more classic-looking the better, and there's just something so mesmerizing about the path this North Pole Express train takes.

Back in 2002, it was impossible to find online. Amazon, though already the world's biggest bookstore, wasn't selling everything from diamonds to diapers. There wasn't the number of online specialty toy stores there are today. As luck would have it, we found it at a year-round Christmas store in Carmel, CA -- and happily drove the 180-mile roundtrip journey to get it. It has been part of our family ever since.

No matter how much the kids beg and plead, the North Pole Express train only comes out once a year. They get their fill of it throughout December, going through a set of AA batteries, before we pack it up again in January. It's probably a big reason why the kids don't get bored with it, and I'm sure it's the only reason it has lasted so long (every time an overeager child drops the train, we hold our breath until we see those wheels turning once again). Absence really does make the heart grow fonder; our ears may be ringing from our train's annoying chugga-chugga-chug, but it's certainly music -- holiday music -- to this family's ears.
posted on Tuesday, December 14, 2010 Labels: holidays
Email ThisBlogThis!Share to TwitterShare to FacebookShare to Pinterest