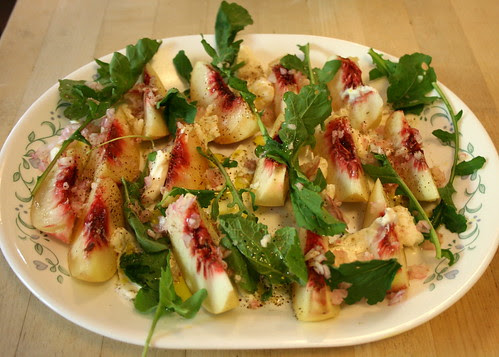 Two weeks ago I attended a party hosted by Sony Dash, featuring an amazing lunch by chef Jennifer Puccio, executive chef of Marlowe restaurant in San Francisco's SoMa neighborhood. Everything was delicious, but the standout in my mind was her White Peach & Berkeley Burrata, a simple delicate dish featuring ingredients I know and love, as well as some exciting new finds. It was so easy to make, I knew I had to try it out. All I had to do was gather the ingredients!

First up: white peaches. That's the easy part. Our local farmer's market has a stand that sells the sweetest organic peaches and nectarines in California; they're the reason we go to the farmer's market every week. The farmer's market also sells organic arugula lettuce, and there's no better proof that that they're pesticide-free than the seeing holes in almost every leaf from the bugs that like to much on the chemical-free leaves (I was actually kind of grossed out until the guy assured me they wash it 4 times. What do you think?) 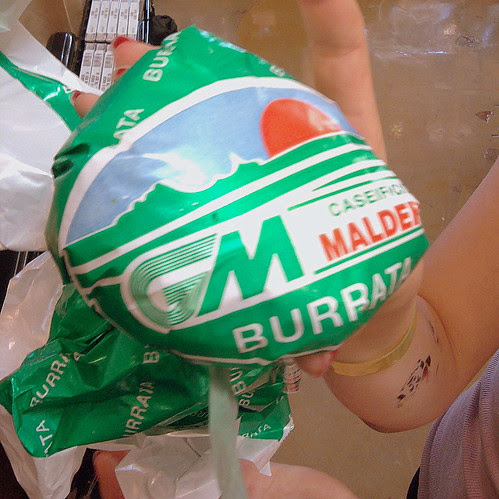 The next thing I had to find was burrata cheese, which I had never heard of before. It's an Italian soft, fresh cheese that looks kind of like a cross between mozarella and ricotta. It comes in a ball, and the outer rind is mozarella, while the inside is a mixture of mozarella and cream. The texture is lumpy and dollopy, and it tastes creamy with just a teensy hint of saltiness. It's also quite expensive; I found it at Whole Foods, where a ball the size of The Pea's palm cost $13. But I was determined not to substitute any ingredients, so I went ahead and whipped out my credit card.

I found the next two ingredients, smoked sea salt and smoked olive oil, at Williams Sonoma. I've never heard of either of these two ingredients, and I was amazed at how wonderful they made the dish smell and taste! If you close your eyes and sniff a pinch of smoked sea salt, you'd swear you were smelling bacon. These aren't cheap either -- a 6-oz. bottle of the olive oil was $26 and a 3.1-oz jar of the salt was $8 (I almost bought a smoked sea salt with Chardonnay in it for $28, good thing I spotted the cheaper variety on my way out!) -- which makes this probably the most expensive salad I've ever made at home.

I know I said I wasn't going to substitute any ingredients, but I honestly forgot about the alleppo chili flakes, so I used regular chili powder instead. As for the pickled shallots, chef Jennifer just soaked minced shallots in fresh lemon juice until they turned pink, so that's what I did too.

With all my ingredients in place, I was ready to (re) create a culinary masterpiece: 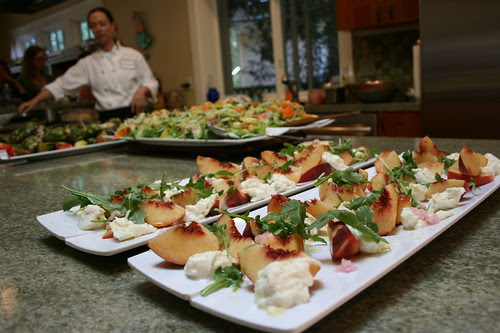 Arrange the peaches and chunks of the cheese on your serving platter. Scatter the wild arugula over the top. Sprinkle the pickled shallot over all. Generously drizzle with the smoked olive oi, then sprinkle with the smoked salt and the allepo chili.

This is how my home version turned out:

Pretty simple, huh? And pretty gorgeous. At least, that's how it looked until my family got through with it. Because it was also pretty delicious. In about 5 minutes that plate was reduced to a mess of olive oil flecked with chili powder and shallot bits, strewn with stray bits of arugula. At first, the kids grimaced at the bitterness of the arugula, but after I advised to them to take just a small amount of arugula with each bite of peach and burrata, they happily ate the greens. I think I went a bit too heavy on the olive oil, but other than that it was just as heavenly as I remember it.

The blissful look on my family's faces said it all, but the crowning moment was when Alfie told me, "This tastes like something a restaurant would serve!".

Yup, he got that right.

Disclosure: Sony Dash hosted a party featuring a cooking demo and lunch by Jennifer Puccio of Marlowe SF. I will be featuring the Sony Dash in a future review and giveaway on Bonggamom Finds, but I was not required to post about the party, this dish or the Sony Dash.
posted on Sunday, September 26, 2010 Labels: food, recipes
Email ThisBlogThis!Share to TwitterShare to FacebookShare to Pinterest

Looks beautiful and delicious! I love Burrata! I need to get the rest of the ingredients quickly, before summer ends!