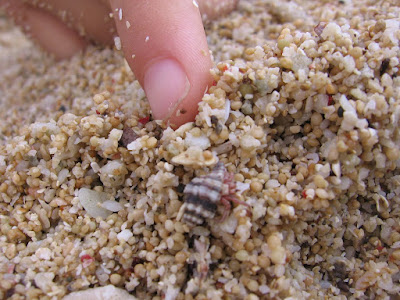 On our recent trip to Punta Fuego beach, The Pea spotted this hermit crab scuttling across the sand. I'm not sure how she managed to do it; the sand was fairly coarse and strewn with shells, whole and broken, and the crab was about as big as her fingernail. The shell it lived in was perfectly patterned to blend in with its surroundings so it was really a wonder that The Pea was able to see it.

It only took a second for The Pea to became the crab's sworn protector and built a sand fortress around it, standing guard against predators like birds and curious little brothers. They, of course, kept trying to pick the shell up to see the hermit crab more closely, only to have The Pea swoop down on them, shrieking, "Leave him alone! You'll drop him! He's scared! How would you feel if a giant picked you up and poked you?!" She doubled the size of her protective sand wall; eventually 3Po and Jammy decided to help, and grew more interested in the fortress than in the crab.

Once he realized he was no longer the focus of attention, the little hermit crab quickly burrowed back into the sand. The Pea mourned the loss of her impromptu pet, but acknowledged that he was better off free, as all wild things should be.


Feel free to leave links to your own Photo Hunt entries below. And for more spotted things, click here.

their eyesight is far superior than ours. i'm sure the kiddo is on the look out for something, and what a nice find.

What a great story and shot. Happy weekend.

what a great find. kids are always full of curiosity.

Good on the Pea for the eagle eye and also the willingness to protect nature! :)

That's a very special photo and the sand is so clearly in focus. I needed to be told about the hermit crab however.

Happy weekend to you.

Such a tiny crab! I would probably have missed it. :P

What a lovely story and a nice photo!

Great take on the theme. Now I would never have spotted the crab! Have a great weekend

What a sweet story! And perfect for the theme. :-))

Thanks for visiting, yesterday - my PhotoHunt is up now. Have a great weekend!

Wow that is a terrific photo! I have never seen such coarse sand before! Great choice.

What a great shot of the little hermit crab! Oh, I loved your story too!

Such a fun story and great photo. I really doubt I would have ever seen a crab that small. Certainly another interesting theme with lots of different takes. I’m glad I came and saw yours.

I took a little different angle. You can drop by and check mine here.

I have a hard time looking for that tiny crab!

That was a clever spot, he is tiny.

a fun and sweet story. just last Saturday, i bought some live crabs for Sunday lunch and put them in an ice bucket. my sister heard the "sounds" from the bucket and asked why do i need to torture the crabs?! but she ate the "tortured and murdered" crabs yesterday (LOL).

Funny how kids just love hermit crabs. Nice photo and it really works for the spots. I hope you had a nice vacation.