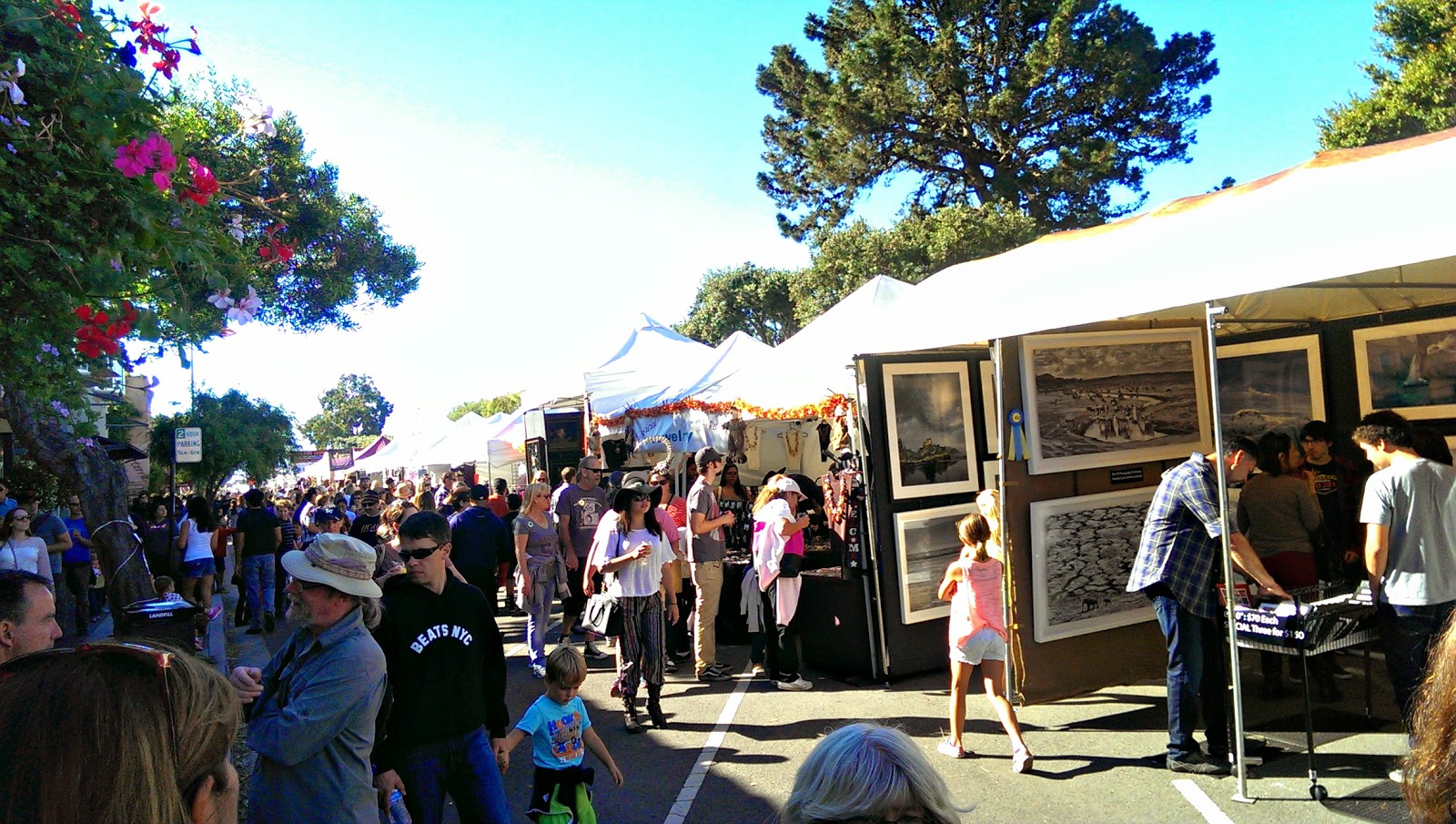 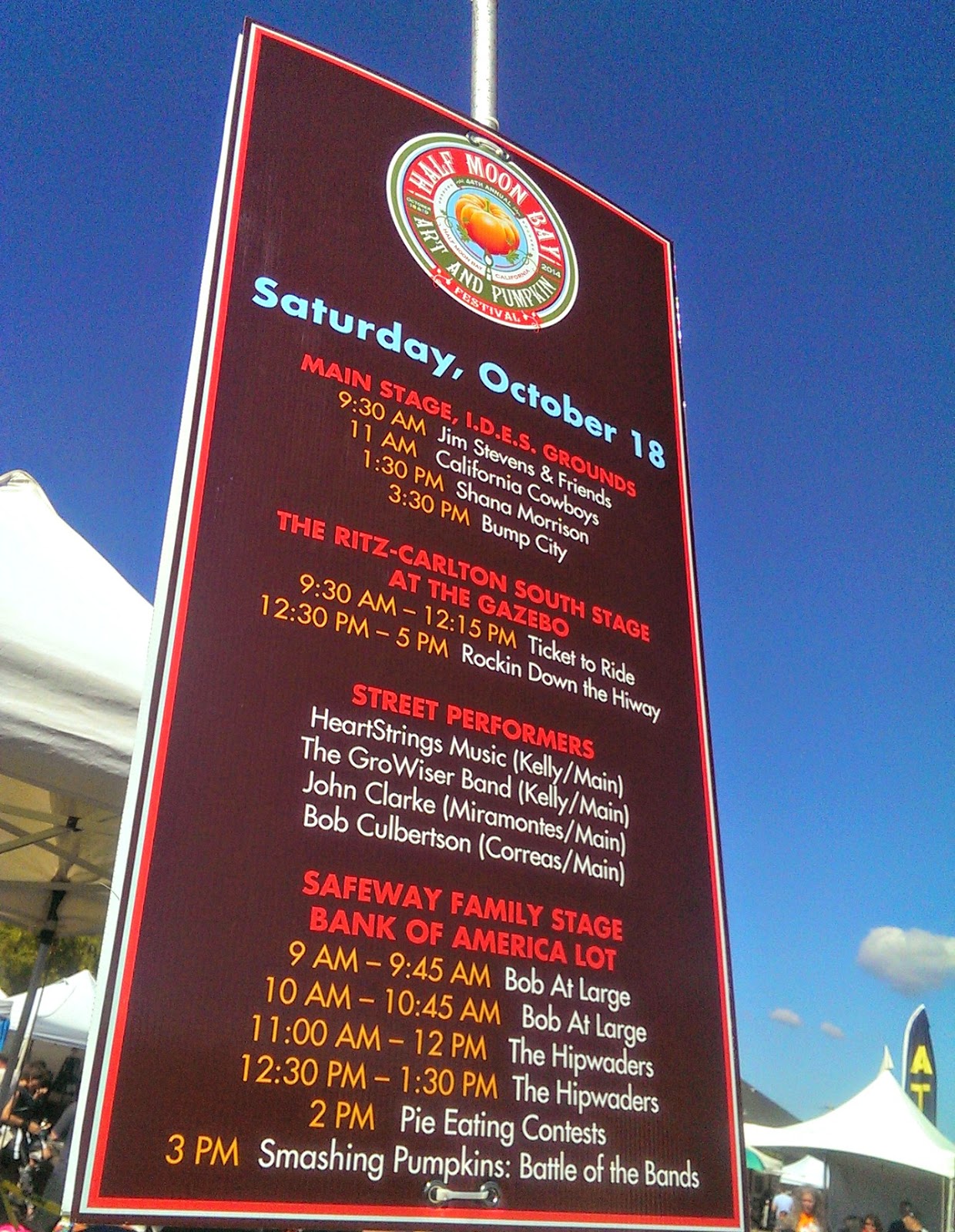 As the city editor for The Savvy Source, I blog about festivals all the time.  There's a festival or fair happening almost every single week of the year, and while there are many I love, the HMB Pumpkinfest is the only one we clear our schedule to attend (with 2 sons on soccer teams and a daughter on a dance team, that's no easy feat!).

While every festival has beautiful arts and crafts on display, they're usually the kind we can't afford or don't have space for.  This festival has tons of adorable stuff that we'd love to buy!  Over the years we've bought t-shirts, ornaments, jewelry, toothbrush holders, magnets, a nighlight, doll clothes, and hats.  Alfie buys all his hats from Hatterdashery; this festival is the only one in Northern California that they seem to visit. 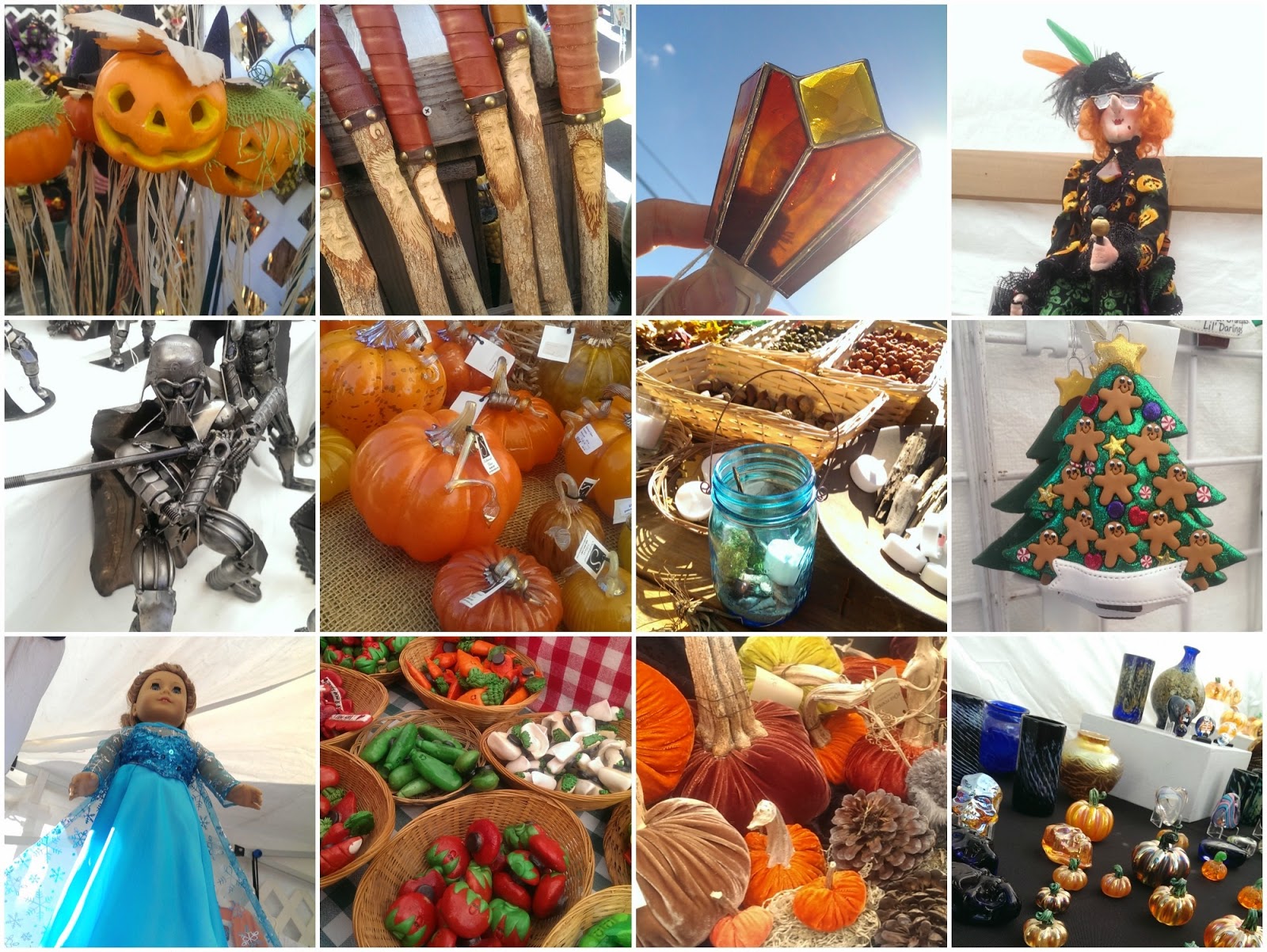 I love how so many festival goers attend in costume -- not just kids, but grown-ups as well!  I've seen everything from adorable pumpkin beanies to elaborate spider hats to full costumes.

Pumpkin carving is big at the festival, and Half Moon Bay has one of the best: Farmer Mike.

Speaking of big, the festival has a pumpkin competition every year, and this year's winning entry set a new North American record (2058 pounds!). 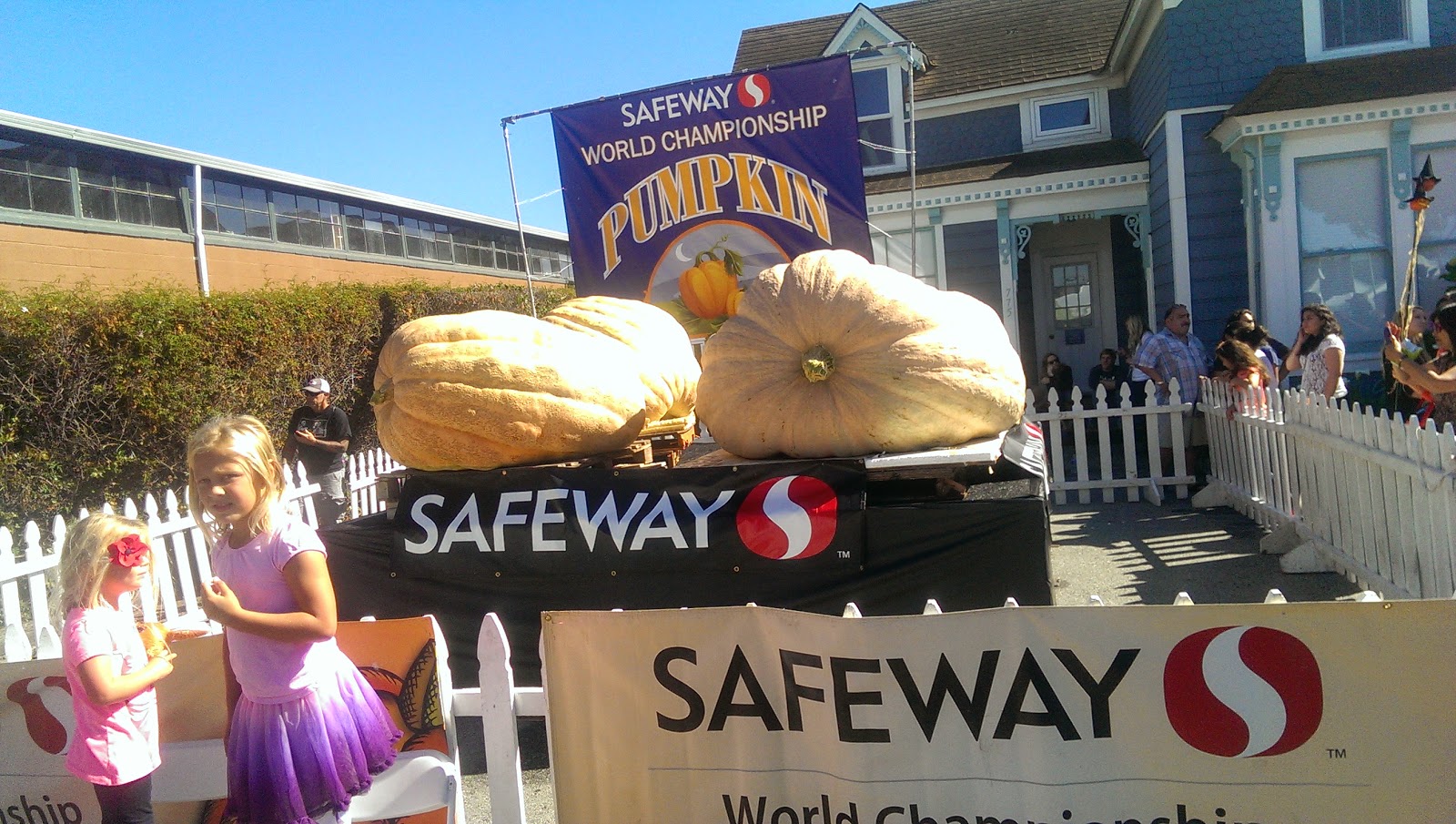 And since this was a PUMPKIN festival, I resolved not to eat anything at this festival that didn't have the word Pumpkin in it. Here are some the treats we sampled: 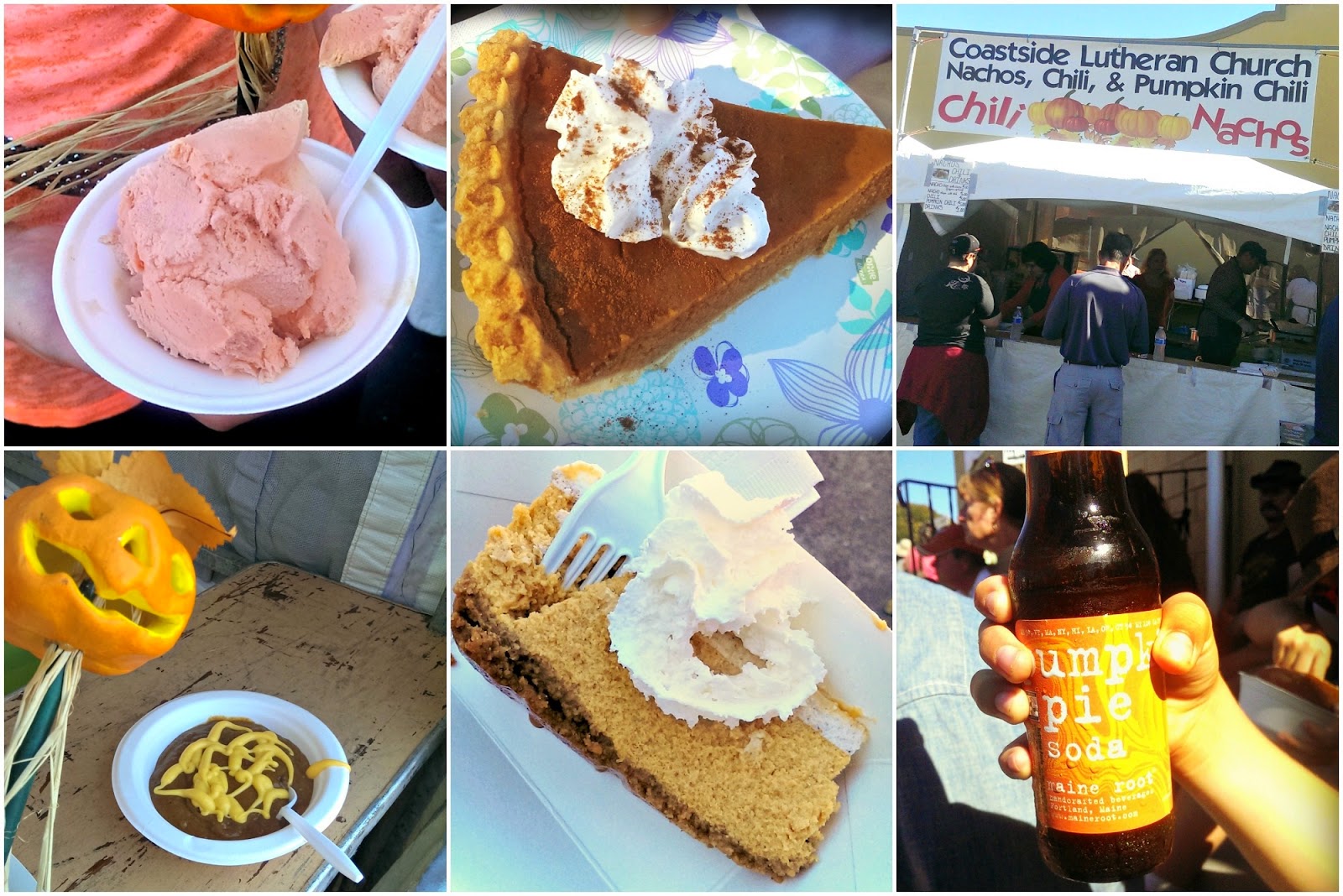 Pumpkin Chili: Looks gross, tastes amazing.  I probably shouldn't have asked for cheese on top; I was thinking more along the lines of real grated cheese, not fake cheesy nacho topping.

Pumpkin Soda: Alfie and the kids loved it, but I found it too sickly sweet.

Pumpkin Pie:  Sorry, not my thing, but hey, it's a pumpkin festival, so you have to have some.

Pumpkin Ice Cream: I love pumpkin ice cream (probably because it doesn't taste too much like pumpkin.

Pumpkin Cheesecake: This was sooooo good.  The cream cheese and sour cream gave it a yummy tang!

Other pumpkin foods I've seen at the festival over the years include pumpkin soup (Deeeelicious! I looked for this but couldn't find it), pumpkin bread (I was too full to eat some, but why oh why didn't I buy some to take home with me????), pumpkin ale (Not my cup of tea, so to speak), pumpkin fudge (It's not high on my pumpkin priorities list), and pumpkin donuts (I really, really wanted to try them but the line was too long).

The crowds seemed to be even crazier than usual, but maybe that's because we went on the first day (we usually go on the second).  If you plan to arrive by festival opening  (9AM) and leave by 2PM, you should avoid the worst of the traffic.  We stayed from 10AM till 1PM and we felt like we could have stayed at least 2 hours more.  The Half Moon Bay Pumpkin Festival should definitely be on every Bay Area family's Must-Do list!