The Philippines(where I grew up)  and the US (where I live now) both drive on the right side of the road, so I never learned to drive on the left.  Alfie (who has lived in the UK, Australia and the US, and has driven on both sides) has always been with me, so I've never needed to.   Even when we've taken road trips to France and Belgium, I've let Alfie drive because I didn't' really want to drive on the right side of the road in a car whose driver's seat was on the right  The cars we rent in the UK charge £10 per day for an extra driver, so I didn't really want to pay an extra £200+ on top of the hundreds we were already paying to rent a car for 3 weeks.

But it has always bothered me that I haven't ever driven in the UK.  Driving a car is one of the skills I think every adult needs to learn, and it's one of the things that defines me as an independent person, especially when I'm in the suburbs or in the countryside.  I've always hated being dependent on Alfie or Alfie's dad to drive me around whenever I've needed to go to the grocery or to the bank.

Finally, after 15 years of visiting the UK, I told Alfie I wanted to drive. £10 per day charge, be damned! I needed to do this!  What if I had to drive in an emergency?  Better to be prepared! To say that Alfie was nervous was an understatement ("Those are my kids' lives you'll be risking!" "You can't even look over your shoulder while riding a bike without swerving!"), but he couldn't really come up with a good argument why I shouldn't try it.   We found a car rental company that allowed me to be an extra driver on the car rental for just 3 days instead of the whole 3 weeks.  I finally got to drive on the left side of the road!

Driving on the other side of the road was definitely a challenge.  I had to concentrate more and be more aware of what I was doing.  Several things do take getting used to.  Here are some of my observations after driving on the left:

1)
All my life, I've looked over my right shoulder, to check the traffic behind me in the rear view mirror.  In the UK, I have to look over my left shoulder -- it was harder to get used to than I thought!

2)
The same applies to the stick shift.  I had to use my left hand to change gears (or in the case of an automatic, switch to and from park/reverse/drive) instead of my right hand.

3)
English countryside lanes are far narrower than US streets.  In many cases, there's only room for 1 lane, even though the road allows 2-way traffic!  On those kinds of roads, I had a devil of a time judging distances between objects and the left (passenger) side of the car.  I was constantly driving up sidewalks and threatening to scrape other cars with my side-view mirror.  This, more than anything else, was what gave Alfie heart attacks!

4)
Driving on highways is easy as pie, and it's a far more pleasant experience that driving in the US, because drivers in the UK are far more disciplined when it comes to changing lanes.  The outside (rightmost) lanes are for overtaking, period.  The slowest cars and trucks stick to the inside (leftmost) lanes.  If you see a car faster than you in your rearview mirror, you move over to a slower lane and let him pass.  You never get slow drivers in the fast lane and frustrated drivers weaving between lanes trying to avoid the slow drivers. 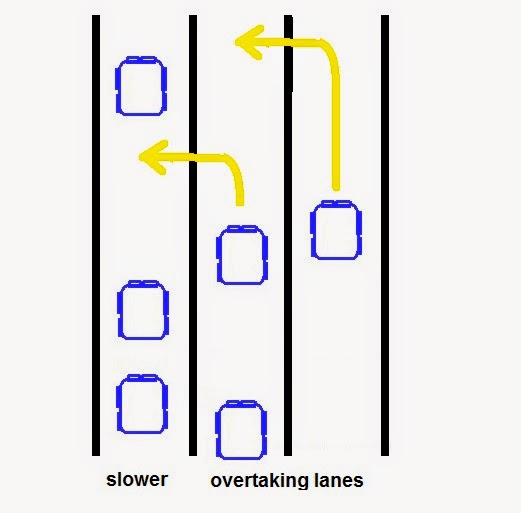 5)
Because of this discipline, you have to be far more alert when driving.  You can't just "cruise" (or if you want to cruise, do it in the slowest lane!).

6)
Negotiating a roundabout can be tricky, because the lane you get into depends on which exit of the roundabout you want to take.  I had to have Alfie doing a running commentary ("Okay, get into the middle lane.  Now switch to the outside.  Now exit") to help me at the larger, more crowded roundabouts.

7)
I couldn't believe people would actually give way to me (drivers wanting to enter a roundabout are supposed to give way to drivers already in a roundabout -- or in other words, yield to vehicles on the right).  In the Philippines, and partly in the US, it's every driver for himself, so I'm not used to this kind of discipline! 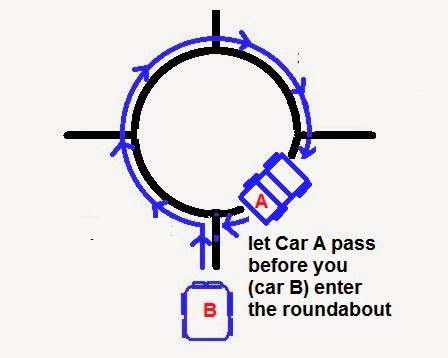 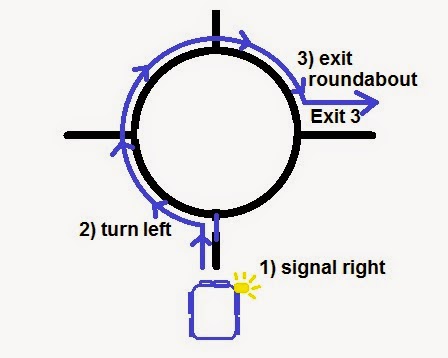 It's a challenge, all right, but it's not insurmountable.  Any decent driver can get the hang of it after a while! After just a few minutes of driving and muttering "Keep to the left.... keep to the left", I had the right and left turns figured out, and the rest is history.  I'm happy I did it and can't wait to drive again the next time we visit the UK.  (Whether Alfie agrees with me is another story!).

posted on Monday, July 21, 2014 Labels: about me, travel
Email ThisBlogThis!Share to TwitterShare to FacebookShare to Pinterest

Driving is the reason why I never take my car to the UK, anyway for me it's so easy to travel from Brussels to London with the Eurostar. However once I will give it a try. The only trouble are the roundabouts and which street you should take when there are two "entries" !

And some of us did it the other way around. It took me a while to adjust to sitting on the left and controlling the 'stick' with my right hand. After 14 years here I still occasionally have moments when I can't remember which way to turn when I reverse out of my driveway, or suddenly get a panic attack thinking I am driving on the wrong side of the road.