Creativity is Universal: Restroom signs (and more) at the Universal Orlando Resort If you've read my blog over the years you'll know that I have a peculiar obsession with theme park restroom signs. I've always said the devil is in the details, and nothing says detail to me more than restroom signs that are consistent with a themed area.  Any old theme park can buy generic restroom signs, but it takes a special kind of theme park to realize that the immersive experience continues even when nature calls.

So whenever I visit a theme park, I like to keep an eye on the restroom signs.  If any strike me as particularly cute or clever, I'll snap a photo (you have no idea how many weird looks I've gotten while doing that, especially when snapping the one of the male signs!  And half of the time, those weird looks come from my own family!).

Unfortunately, most of the restroom signs at the Universal Orlando Resort are ordinary, but there are a few notable exceptions that (almost) make up for the rest.  One is the Seuss Landing area in the Islands of Adventure park.  All the restroom signs are custom made to look like they are part of a Dr. Seuss book, with quirky fonts and boy/girl drawings done in the classic Dr. Seuss style.

The second exception is The Wizarding World of Harry Potter.  I just finished a post rhapsodizing about how authentic everything was there, and the restrooms are no exception.  It was late at night when we first visited The Wizarding World, so it was dark and I could only see the stone carved signs marking the little girls' and the little boys' rooms.  I must admit, I was disappointed.  I expected Hogsmeade signs to say Witches and Wizards. But Alfie did tell me that the signs were exactly the same as the signs at his old grammar school, so I was somewhat mollified.  I was also hoping that the inside of the restrooms would look like the girls' toilet that we see in the Chamber of Secrets movie.  Alas, it's a perfectly ordinary muggle restroom.  Well, almost -- you do hear Moaning Myrtle's voice inside!

When we returned the next day, though, it was light enough for me to see the delightfully whimsical brass witch and wizard icons hanging above the building. How could I have doubted JK Rowling's vision?  My faith was restored! 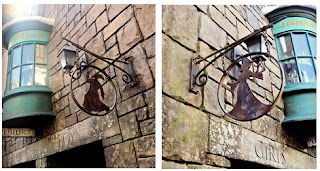 I found two other restrooms with themed signs.   The first was the restroom facility beside the Comic Strip Cafe in Toon Lagoon.  The signs look like little doodle notebooks and the fonts are very cartoonish.  I approve!

The second place was the Blue Man Group theatre.  The stick figures in the restroom signs were, naturally, blue!  Very clever! 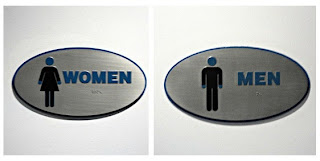 Although the rest of the restroom signs were ordinary, I did find some clever signs near the Despicable Me ride and the Shrek 4-D show at the Universal Studios Florida park.  I thought this minion crossing sign was adorable: Just across the street, the Shrek 3-D stroller parking area also had some great signs, done in a medeival style: Now that's the kind of attention to detail I applaud! Love these! I have one to add:

@Lady M that is ADORABLE! I'm definitely linking to your post!

I'm just coming across this post and how fun! I love how you look for the details, which has got to make every trip more enjoyable!

Thanks for sharing. I know I'm going to start looking at restroom signs more now! :)