A walk through The Wizarding World of Harry Potter I used to think that no other theme park in the world could rival a Disney theme park.  Their imaginative themes, entertaining attractions and attention to detail transport visitors into another world, in a way unlike any other.

But that was before I visited The Wizarding World of Harry Potter.

I read somewhere that attendance to the Islands of Adventure theme park (one of the two theme parks in the Universal Orlando resort) has increased over 50% since The Wizarding World of Harry Potter was added in 2010, and it's easy to see why.   It sets a new standard for immersive experiences; the only other place I can think of that rivals it is CarsLand in Disney's California Adventure at the Disneyland Resort.  Yes, it's that good. You could even say it's, well, magical.

There is so much about this place to rhapsodize about that I can't do it in one post, so I'll leave the attractions (Forbidden Journey! Ollivander's!) and the food (Apple pie! Butterbeer!) for a future post (or two) and focus on the buildings and scenery. If you're more of a visual person (or if my rambling bores you), just head to my Wizarding World of Harry Potter Flickr set and feast your eyes on the photos.

The Wizarding World of Harry Potter is at the back of the Islands of Adventure theme park, as far away from the park entrance (a 6-8 minute walk, maybe 5 if you're so excited that you have to run).  You'll know you've arrived when you reach a stone archway with snow-covered buildings beyond it. Stepping into The Wizarding World of Harry Potter is like stepping straight into the movies or books.  The village of Hogsmeade comes to life, with cobblestone streets, broad-beamed buildings, slate roofs, and quaint signs.  You would think you were actually walking through some quaint, snow-covered High Street in England if it weren't for the hordes or people in shorts and tank tops. There are also local branches of Ollivander's Wand Shop, Gladrags Wizardwear and Potage's Cauldron Shop.  At first I thought the Universal folks had slipped up, or decided to break from the books, since I know Ollivander's and Potage's are in Diagon Alley and Gladrags is in London. I was wrong: it turns out that all 3 stores do have Hogsmeade branches! Some buildings are merely storefronts.  You cannot enter them, but it's so much fun to look into their window displays because they all contain wizarding items like robes, quidditch supplies, cauldrons, owls, wands, etc.. Many of them behave like the magical items in the book, like moving wizarding photos, books (look for a display of Gilderoy Lockhart's latest bestseller!), magical toys, magical plants and more. Stores you can actually enter are Honeydukes Sweet Shop, Zonko's Joke Shop, Ollivander's Wand Shop (which is both an interactive show and a wand shop), Dervish & Banges (where you can purchase wizarding supplies and other souvenirs),and the Owl Post (where you can purchase postcards and have them postmarked with a Hogsmeade stamp). I could spend hours walking around the High Street and wandering through the shops -- not just to look at the stuff for sale but to look at the decor.  Every nook and cranny is crammed with details that make you feel like you're inside a wizarding shop.  For example, look up at the ceiling inside Dervish & Banges and you'll see some broomsticks for sale.  They're tethered to a post, twitching around as though they're going to zoom off as soon as you untie them.  Another fun detail:  you can hear Moaning Myrtle's voice in the restrooms! Keep walking down the High Street, past the Hogsmeade snowman (with Hedwig on his arm) and you'll come to Hogwarts Castle. Again, the detail is incredible.  Look up, and you'll be able to see the clock tower on one side, and the Gryffindor tower on the other side.  The outer walls look like ancient weathered stone, and they're decorated with gargoyles, carvings, columns, iron torches, etc...  I'm told there's a House Cup board somewhere which displays the current point standings for each Hogwarts House, but I missed it somehow.  Oh well, that's something to look for on my next visit. The Harry Potter and the Forbidden Journey ride is located inside the castle, and as you make your way through the (long) line, you'll be walking through the castle and seeing things like moving portraits, Dumbledore's study, the Sorting Hat, the Pensieve, and the Fat Lady portrait. Hogwarts Castle is also the location of Filch's Emporium of Confiscated Goods, another souvenir shop. It's designed to look and feel like a dungeon, with odds and ends piled everywhere. You'll also be able to see the Marauder's Map and a Wizarding Chess set. For even an even greater immersion into the world of Harry Potter, head to the Dragon Challenge roller coaster.  Even if you don't like roller coasters, it's worth walking through the line, because you'll see things like the flying Ford Anglia, the Goblet of Fire, and memorabilia from the Triwizard Tournament. The Wizarding World of Harry Potter is by far my favorite area in the entire Universal Orlando Resort area.  Our whole family loved it, even the non-Potter fans.  Actually, the Harry Potter universe gained two new fans after our visit -- 3Po and Jammy! 3Po started reading the books as soon as we got back home, and he's already starting Order of the Phoenix (book 5).  Jammy is hot on his heels.

It has only been a few weeks since we left Universal Orlando and Harry Potter, and already I want to go back. I'm sure there are tons of little things that I missed on my first visit (yes, the use of the word "first" implies that there will be a second visit at some point in the future!). I might have to wait a few years, though, because Universal is building a second Harry Potter-themed area: Diagon Alley! Construction has already begun (I'm betting that's Platform 9 3/4 they're building in the photo below!), and it's scheduled to open in 2014. Diagon Alley will be located inside Universal Studios Florida, and there will be a working Hogwarts Express connecting the two Harry Potter areas.  A second Ollivander's will go up in Diagon Alley, and I'm hoping for Florean Fortescue's Ice Cream Parlor and the Leaky Cauldron.  Also, 3Po is convinced there will be a Gringott's themed roller coaster, and it looks like the majority of the internet agrees with him.  I can't wait! 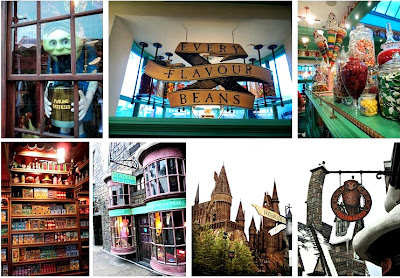