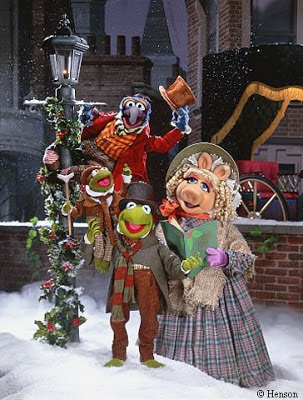 I think I learned the words to the Twelve Days of Christmas from watching John Denver sing it with The Muppets in their 1979 holiday special.  Those were in the days when The Muppet Show aired on TV every week, and we watched it the way kids watch Phineas and Ferb today.  My aunt had the holiday special taped on videocassette (anyone remember Sony Betamax?)  so we could, and did, watch it again and again, year after year.   My cousins and I would sing it incessantly, aping (or should I say piggying?) Miss Piggy's part to perfection:  "Five.... Gooooooolden Riiiiiiiings!........ PADAM-PAM!!!"   Christmas just isn't complete for me without singing this song:

We also adored Miss Piggy's Christmas is Coming song.  Singing it became something of a holiday tradition for us.  Alfie tells me the correct pronounciation is HAPEny, not HA-penny like Miss Piggy says it, but since we had no idea what a ha'penny was anyway, it didn't stop us from singing it from the tops of our lungs.

Here are a couple more recent, but just as hilarious, Muppet videos for your holiday enjoyment: