This past weekend the boys went on their first-ever overnight soccer tournament, the NorCal State Cup for U9 boys in Davis, CA.  Davis is less than 2 hours' drive from home, but their team had four games spread out over 2 days, and 2 of those games started at 8AM (7:15AM if you count their warm-up time) so everyone agreed it would be best to stay at a motel on Friday and Saturday night.

I love watching their games, but with the holidays approaching and The Pea's Nutcracker rehearsals going and with our trip to the Manila looming on the horizon, taking a whole weekend off for soccer seemed excessive.  Then we all came down with colds and flu the week before, so everyone was stressed out trying to recover.  3Po and Jammy shook off the virus by Thursday and I scraped through on Friday, but Alfie had to miss the whole thing, which was a huge blow since he's their biggest fan.  The team hasn't been playing too well either, so I was not optimistic as I drove off, leaving a miserable Alfie and an ecstatic Pea (ecstatic because didn't have to go) at home.


It turned out to be a wonderful experience.  No, the team did not have a miraculous, odds-defying performance to win the State Cup.  The boys ran their little hearts out and actually played really well, finishing the preliminary rounds in the top half, but they were paired with the top-seeded team in the quarter final and lost to a really strong team.  I think the team can be proud of what they achieved, and they certainly gave their adoring parents/fans a thrilling weekend of games.

For me, the biggest success of the trip was seeing the boys bond with their teammates.  These boys see each other twice on weekdays for training and once or twice on weekends for games, but they are all focused on improving their skills and playing soccer.  They never have time to hang out, play and be little boys together -- and this weekend finally gave them the chance.

All the team families booked a block of rooms at a nearby motel, so the weekend became one huge, extended sleepover.  Each boy slept with his own family in their own room (which was a good thing because they would have hyped each other up way past their bedtimes), but they spent practically every waking moment together.  They gathered in the motel's breakfast room in the mornings.  We ran into each other as we grabbed lunch at the local eateries.  We took over a whole corner of a local pizza joint for Saturday night dinner.

I have to admit, I feel a bit sorry for the other motel guests who were not part of the team.  Parents gave the boys strict instructions to behave and tone down the noise, but they did kind of take over the motel.  They exchanged room numbers and phoned each other.  They visited each other's rooms (ours was especially popular because another boy stayed with us on Friday night and he, 3Po and Jammy all brought videogames).  They rode in each others' cars when going to and from the soccer field between games. 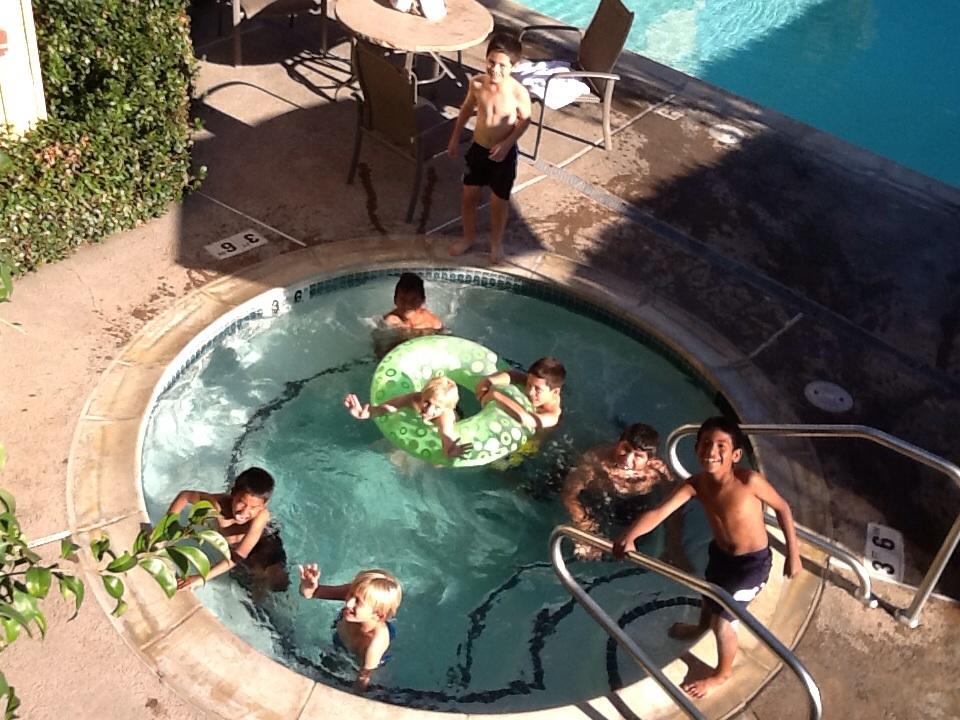 The jacuzzi and pool complex served as party central between the morning and noon games, and after the noon game.  Only a couple of boys had brought swimsuits, but that didn't stop the rest (including 3Po and Jammy) from jumping in, wearing athletic shorts or underwear.   Don't let the sun in the photo fool you -- it was a bitterly cold (for California, anyway) weekend, in the low 50's/high 40's.  The jacuzzi was nice and hot, but those crazy boys did what boys do and spent the entire time jumping in the ice cold swimming pool and rushing back to the warmth of the jacuzzi.

The team had the time of their lives, and I think the parents had fun as well, getting to know each other better, cheering the team on, and enjoying the sight of their sons enjoying the company of their teammates.  No, not just their teammates, their friends.  This weekend solidified that, and now they're closer than ever.  This newfound camaraderie might even help them play better as a team.

3Po, Jammy and I arrived home on Sunday afternoon tired (the boys haven't gone to bed at 7:30PM since they were in preschool!) but happy.  They didn't set the tournament on fire, but they gave it their all, and they had fun with their friends.  Also, I must admit I'm not too sorry that we won't be giving up the upcoming weekend to play in the State Cup Semifinal/Final round.  So any way you look at it, it was a successful weekend.

posted on Tuesday, November 13, 2012 Labels: 3Po, boys will be boys, Jammy, the real football
Email ThisBlogThis!Share to TwitterShare to FacebookShare to Pinterest

How fun to spend time away with good friends. The kids will always remember this.