Alfie is the only one in the family who is somewhat grumpy indifferent less than enthusiastic about dressing up for Halloween. He does it because he knows the kids like it; once they leave home I doubt if I'll be able to persuade him to go anywhere near a costume. Oh well, just like childhood, I have to enjoy Alfie's costume era while it lasts.

Since the kids were born, Alfie has only had two costumes: a skeleton and Jack Sparrow. Every year he's either one or the other, so this is quite an unusual year in that Alfie has three Halloween costumes to choose from. First is a werewolf costume from Pottery Barn Teen: 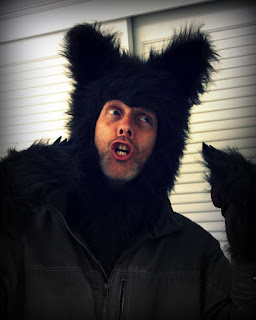 It was given to us to review, and I chose it for Alfie because I thought he'd enjoy the warmth it would provide as we went trick-or-treating on Halloween night. It's just a headpiece and gloves, so he can wear it with regular clothing and take it off really easily.

Alfie's second choice is a devil bathrobe costume that I bought for the annual PTA auction party. The theme was a pajama party, and Alfie didn't want to go in just any old boring pair of pajamas. We thought of Wee Willie Winkie, in his nightcap and gown, so I went on eBay and found one from a UK site. I bid and won.... but horror of horrors, when it arrived, it was just the cap! No gown. Apparently the term "Fancy Dress" in the phrase "Wee Willie Winkie Night Cap Fancy Dress" meant "Costume", not "and gown". I should have known it was too good to be true, but with just one week left, I had to move on to Plan B. I found a devil smoking jacket and convinced Alfie he'd look cool if we left the horns off and cut the tail out and he could go as Hugh Hefner. 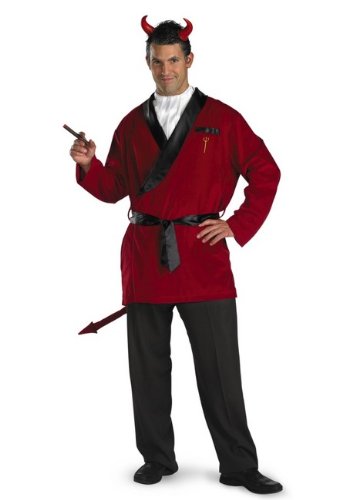 (By the way, that is not my husband. I don't have a photo of him wearing the costume, because if he decides not to wear it then I can try to resell it as "New, Never Worn").

But Alfie still wasn't sure about the Hugh Hefner thing, so in the end he decided to wear his own pajamas, along with the nightcap, and take along his very own Teddy. Except he never got to wear it, because 3Po got sick and Alfie had to stay home with him.

Which costume will Alfie ultimately pick for Halloween night? Who knows?
posted on Thursday, October 27, 2011 Labels: Halloween
Email ThisBlogThis!Share to TwitterShare to FacebookShare to Pinterest