Spring cleaning -- in the summer

I'll admit it -- I'm a pack rat. I keep stuffed toys and baby cars because sometimes (like once a year) the kids want to play with them. I keep old holiday cards and baby blankets and The Pea's cracked ceramic footprint because they're precious memories of good times. I keep old receipts and bank statements and tax returns from 10 years ago because you never know when you're going to need to prove you bought that VCR recorder for $199.99. I keep new stuff, too. I have a gift closet filled with cute presents that were on sale, because you never know when you're going to need to pull a present out for a birthday party or housewarming. I keep boxes of craft supplies because the kids are always doing some project or craft. PR agencies send me things to review. I pick up swag at conferences and events. Stuff, stuff, stuff. Every time I see ads for the show Buried Alive on tv, I shudder and wonder if I would ever let myself go that far.

Fortunately, I have Alfie, who is neat and tidy and very minimalist in his approach to material possesions. His motto is, If you need it, buy it. If you don't need it, throw it away. There's no "Just in Case". He keeps my hoarding tendencies reined in. To his credit, Alfie never nags (well, hardly ever). When I see his frustration mounting as he sees piles of stuff piling up in more and more corners of the house , I know it's time to clear up. And over the years I think I've gotten much better at expediting the outflow. 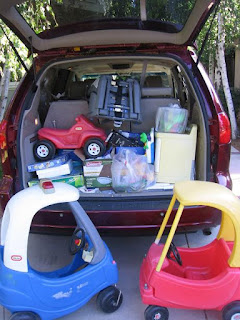 Just this week I donated a vanload of old toys and games to our local homeless shelter. In the past I would probably have tried to sell them, and failed to sell half, and kept that half in the hopes that I'd eventually sell and make some money. This time I decided to rip the Band-Aid off in one fell swoop; I told myself that we'd be making some homeless kids very happy, clear up much-needed playroom and garage space, and get a good charity write-off to boot. It actually feels just like ripping a Band-Aid off, or picking at a scar -- suuuuuuuuch a relief.

It took me a whole summer to finish up my Spring Cleaning, but hey, better late than never.

The scary part is, the playroom still feels like it's filled to bursting. I may have improved on the outflow part, but I guess I still need help stemming the inflow.

I'm a pack rat and clutterer myself from a long line of them. I'm very sentimental about things and it's hard for me to let go.

My BFF comes over about twice a year to make me clean up and clear out. I would prefer to sell stuff but have now set up a system.

I'll try eBay or Craigslist once for some items, if it doesn't sell, then it gets donated. Honestly we can use the tax write off more than the piddly amount of cash we'd get.