Today I join hundreds of people at Blogswarm, thousands throughout the blogosphere, and millions around the world, in mourning the day that George Bush used the US Army to invade Iraq and throw the world into turmoil.

Five years. Five. Fucking. Years. I never ever swear on my blog but today I am angry.

I went through my photo archives to five years ago and found these photos of The Pea at her first rally. We attended an anti-war protest at the Civic Center in San Francisco, where we marched and chanted and voiced our objections to a war that, even then, we knew had no justification. 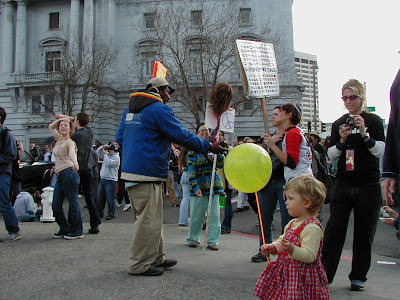 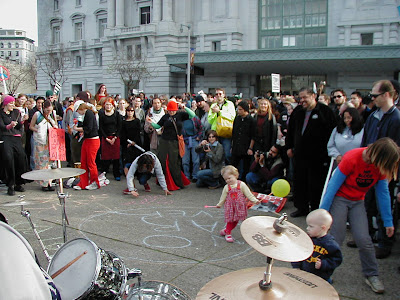 I look at the Pea, so young and small, dancing happily in the circle, and I think about the difference five years has made in our lives. The Pea is now in first grade. We have two more children. The economy has not been kind to us. We have gone through 3 job layoffs and live much more frugally than we did before. We certainly feel no safer than we did five years ago; quite the opposite, we encounter anti-American sentiment wherever we go.

And I wonder about the people who are not in these photos, the people who have suffered the most because of this war, the Iraqis. How many have had their lives torn apart since the war began? How many had children the same age as The Pea, but don't have those children with them anymore?

I am angry. George Bush and friends, you have a lot to answer for.

Thanks for joining in this effort. Excellent post (as usual).

Thank you for mentioning the Iraqis. The corporate media would like us to forget about them and their suffering.