Every year, the classes come up with different themes. This year, the Juniors decided on Rubber Ducky. On Day 1 of Spirit Week, each class comes dressed in costumes that match their Spirit Week theme. Most kids went to school in bathrobes and shower caps. A few put on rubber duck suits. The Pea constructed her own shower. 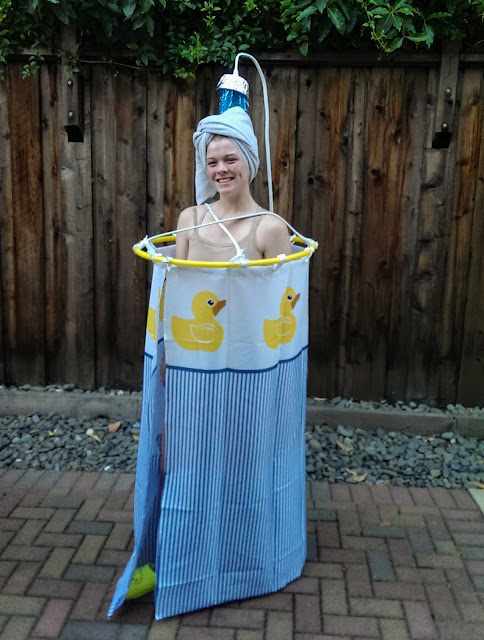 To make the shower, she bought a shower curtain, then attached it to a hula hoop. She and Alfie constructed a shoulder strap for the shower so she could wear it comfortably. They constructed a shower head out of a wire coat hanger, a plastic cup, some foil, and strands of a blue hula skirt. She wore shorts and a nude leotard (it's amazing how many people did a double take -- duh, as if I'm going to let my daughter go to school topless!!).  She twisted towel on her head and wore yellow ducky slippers to complete the look.

Needless to say, her idea was one-in-a-million (or one-in-two-thousand as far as her high school's population goes). She was nominated to represent the juniors in the costume contest along with a guy who wore a towel. Together, they took Best in Costume for day 1, with all the glory and all the points that go with it.

For Day 2, each class was assigned a different kind of salad dressing. The juniors always get Thousand Island, which means a Hawaiian theme. The Pea figured that most of the girls would go the sexy hula girl route, so she switched it up a little and went with a shark dressed as a hula girl. She bought a Sexy Shark costume (honestly, is there a "sexy" version of every single costume out there?) and hula accessories. 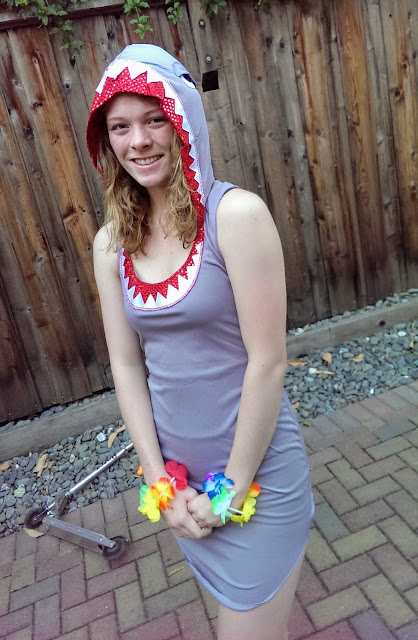 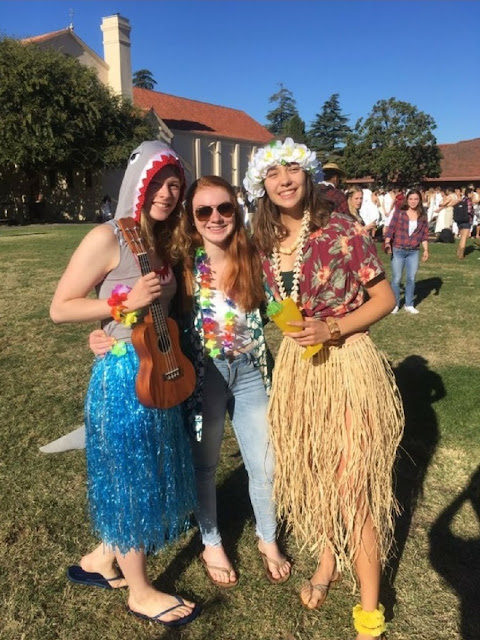 Day 3 was Color Day, and the Juniors got the color yellow. Most people just threw on whatever yellow items they could find, but The Pea decided it was the perfect excuse to buy a banana suit. She borrowed yellow crocs and yellow shorts to complete the look. 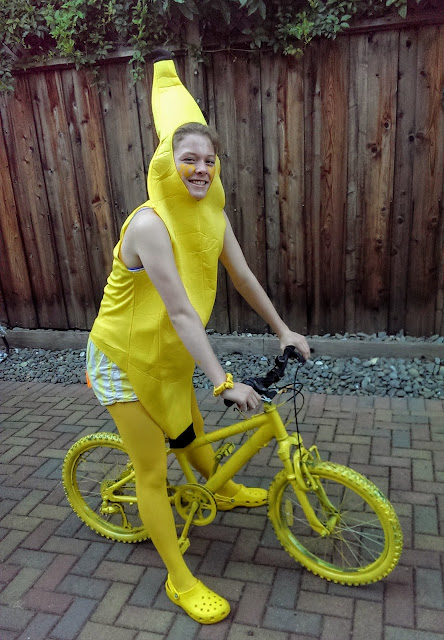 Going as a banana is already pretty outrageous, but The Pea being The Pea, she wasn't done. She and some friends gathered all the tiny bikes they could find -- a few from friends, a few on Craigslist. They spray painted the bikes yellow, and biked on them to school. She and another bike-riding banana were nominated by the juniors to represent their year in the Best Costume contest... and they won again!


Day 4: Young Professional at her desk

Traditionally, each classes dresses as a different generation on Day 4. The freshmen dress as babies, the sophomores dress as teenagers, the juniors dress as career men & women, the seniors dress as senior citizens. This was probably the most challenging theme for creativity. How funny and original can you get wearing a suit and tie? By this time, The Pea had made quite a name for herself, and she had a reputation to uphold. Having tasted victory twice, I'm guessing The Pea decided she had to step it up. So she scrapped her original suit-and-tie outfit. Or to be more precise, she embellished on her original suit-and-tie outfit. A friend told her that the only way she could be creative with the career professional theme would be to wear a desk. So The Pea wore a desk. 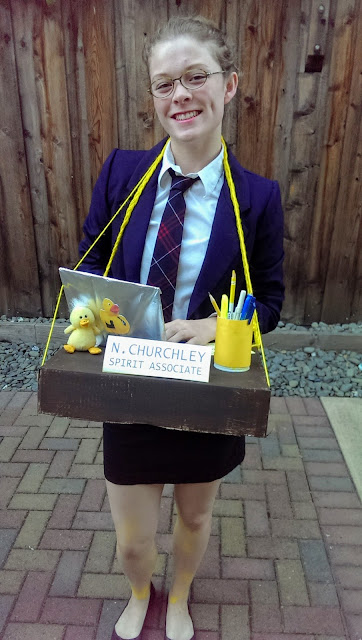 At 11:00 pm, as Alfie and I were tucking ourselves into bed, The Pea popped her head in to ask me where the glue gun was. She said she wanted to make a desk to wear with her business suit outfit. I felt sorry for her, and I didn't want her to stay up till 3:00 am to make her desk, so I got out of bed to help her out. Thirty minutes later, Alfie got out of bed to lend a hand. I find it funny that we have never lifted a finger to help any of our kids with homework or with school projects, but we both slaved away to help with a costume. 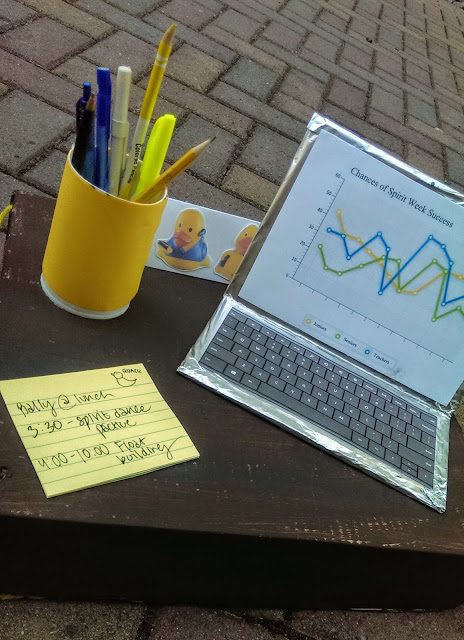 The desk is a shallow cardboard box, painted brown. The laptop is a piece of cardboard, folded in half, covered with foil, with a screen and keyboard glued on. We hot-glued pens and pencils into a paper cup, and glued the cup onto the desk. We added some sticky notes and a name plate to finish the look. With our help, The Pea was able to finish the desk in just under 1 hour and get to bed by midnight. 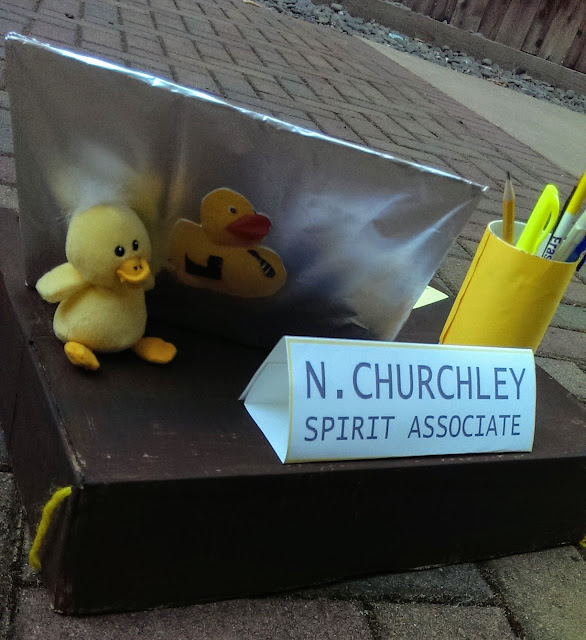 Once again, The Pea got nominated by her classmates to represent the junior class in the costume contest. Unfortunately, the juniors lost to the seniors, which isn't really surprising considering that "senior citizen" is a way funnier and easier theme than "career professional". No matter how cool that desk was, I guess it just couldn't compete with bald wigs, walkers, and false teeth. But I'm still proud of The Pea for taking a boring theme, thinking outside the box and coming up with yet another creative take.

On Day 5, the entire high school dresses in their high school colors, green and white. Again, The Pea had originally planned to dress head to toe in green. Again, everyone was asking her what amazing costume she would be wearing. Again, she discarded Plan A and started creating a new costume at 11:00 pm.

She slept over at a friend's house so they could make her costume together, so Alfie and I had no idea what she would come up with. Alfie guessed she would be a tree -- after all, what's greener than a tree? He was right. But she didn't make just any tree. She made the Stanford Tree.

The Stanford Tree is Stanford University's mascot, so he/she/it is well known in Palo Alto. Stanford is literally across the street from The Pea's high school, and many graduates go on to attend Stanford. In short, The Tree is iconic in this part of the world. Here is what The Tree looks like: 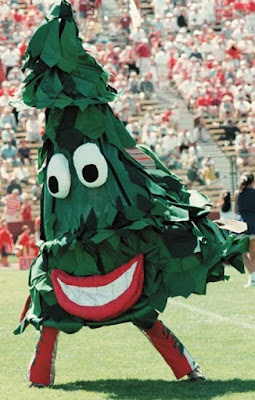 I can't think of a more brilliant way to go as something green in this part of the world. And I can't think of a more brilliant execution than The Pea's costume. She and her friend took a simple a-line dress and glued strips of green tissue paper all over it. They glued on eyes and a mouth. They attached a hula hoop to the bottom of the dress to give it that pine-tree, conical shape. They made a paper cone hat. She wore green tights and green Crocs. 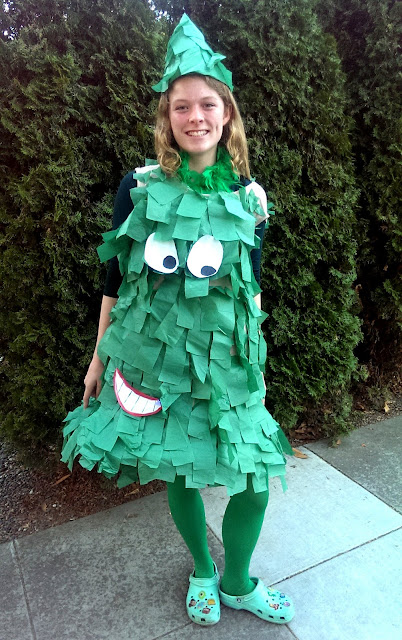 As I write this, the costume contest has not happened yet, so I have no idea whether she will be nominated again, but something tells me The Tree is a winner. Call me biased, but I think this is her mic-drop moment. Is it too much to hope that some Stanford college recruiters are judging these daily costume contests, or at least watching them, so she gets an edge in recruitment?

To think that she made all these costumes in 3 hours or less. The Pea has set the bar so high for creativity that I have no idea what she will come up with for next year. I can't wait for next year so I can find out.