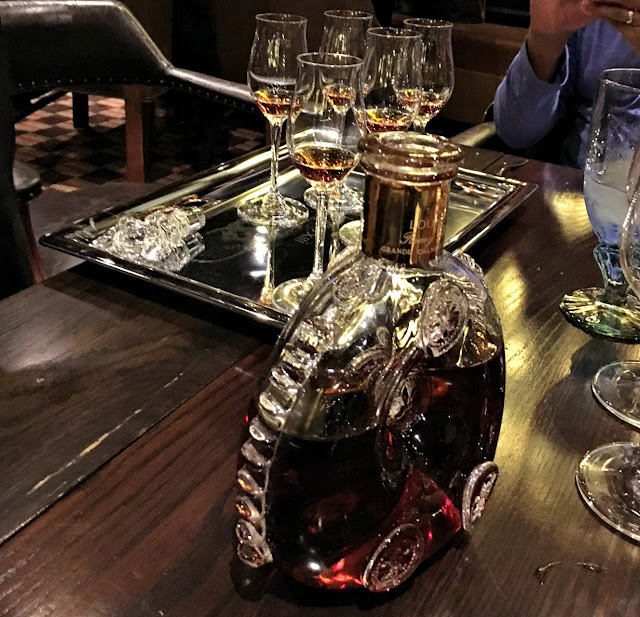 This is sure to be one of those stories that I'm going to bore my grandchildren with. Last week, we were in the San Diego area for 3Po and Jammy's soccer tournament, staying at the Rancho Bernardo Inn in Escondido. The Inn is definitely a cut above our usual soccer tournament digs; it's got a golf course and lush grounds perfect for luxury weddings and retreats.

Anyway, that's how Alfie and I ended up joining our fellow soccer parents at one of the resort's fancier restaurants for after-dinner drinks and dessert. As we pored over the menu, one item in particular caught everyone's eye:

That's not $190 for a bottle. That's $190 per glass. It certainly stood out amongst the $8 drinks! Someone Googled it and found it on BevMo at $3500 per 750-ml bottle. That sparked a loud, lively discussion. Why was the cognac was named Louis XIII (Louis XII built Versailles and Louis XIV had "Let Them Eat Cake, but what did Louis XIII ever do?)? What could be in it to make it so expensive (Louis XIII's skin cells?)? Who would ever order it (one of the parents had been a waiter in a good restaurant through college, and he said the only time he ever saw it ordered, the guy who ordered it proceeded to dump the cognac into a cup of American coffee and gulp it down. The guy's companion told our friend that he was scheduled for a life-or-death surgery the week after)?

At some point during our conversation, we became aware of a white-gloved waiter approaching us, bearing a tray containing glasses and a crystal bottle. He was saying, "We could not help hearing you talking about the Remy Martin cognac...." NO. EFFING. WAY.


Yes. This Is Happening.

The waiter proceeded to pour out five glasses of $190 cognac (that's $950 if you happen to be counting). The restaurant was offering the gentlemen on the table a sample of Louis XIII Remy Martin cognac. I still don't have a clue as to why they chose our table -- I didn't see any other table get the white glove treatment -- but I have a feeling it had something to do with the fact that our friends had waited over an hour to get their entrees, and one of the dishes was a rare lamb steak that arrived well done.

By the way, you did read that correctly: they only offered The gentlemen. Not The ladies. Can you say OLD BOYS CLUB?? HOW SEXIST IS THAT?? I noticed it right away, but at the time, no one knew what was going on. Everyone thought that someone from our table had secretly ordered the cognac, and we were all accusing each other of over-the-top generosity. We all knew that none of the ladies at our table drank cognac, and I wasn't about to order a $190 cognac that I didn't really want if one of my friends was paying! But the restaurant didn't know that the gals didn't like cognac, so I'm virtually calling them out for not offering samples to the ladies! Hey, restaurant managers: Women deserve $3500 cognac as much as men do.

(Steps off soapbox, gets on with story). To begin the tasting experience, the waiter answered all of our questions and gave us a brief history of the cognac we were about to enjoy (I guess they factor the cost of the waiter's cognac education into the price of the cognac). Cognac is a kind of brandy that must come from the region of Cognac in France. It comes from wine that has been distilled twice, then aged. Louis XIII has been aged for 100 years aged in barrels that are 300 years old! Apparently the cognac is named Louis XIII because the Remy Martin family first designated the area during Louis XIII's reign. Here's a crazy anecdote: when Hitler marched his army through France, he gave his generals instructions to avoid destroying the chateaux with the distinctive black mold in the cellars which signify ageing cognac. Can you imagine? Hey, mein soldiers, kill all the Jews you want, but leave the black mold alone.

Liquor this expensive requires some respect, and our waiter gave us a crash course on how to properly appreciate Louis XIII. First, hold the glass in your palms, against your chest, to warm the cognac up. Second, breathe in the fumes of the cognac. Savor the notes of jasmine, prune, fig, hazelnut, oak, vanilla, and honey. Third, take a sip. Enjoy every moment. Hey, it has taken over 100 years for the cognac to get to this point, so I guess it's not asking too much to wait a bit longer. Also, I guess drawing the experience out makes sense because it costs more than front row tickets to a two-hour Cirque du Soleil performance.

I'm not a cognac drinker, but there was no way I was passing up the opportunity to try $3500 cognac. I took a sip from Alfie's glass and let him finish the rest. So how did the cognac taste? It was very strong, but it certainly went down smooth! All the guys who tried it were in heaven. Cognac connoisseurs generally agree that Louis XIII is worth every penny, but sadly, it was wasted on me. My palate isn't sophisticated enough to make out any of the scents and flavors the waiter mentioned except maybe honey (or was it caramel?). The only way I could tell it was quality cognac is that it didn't make me want to gag as it went down my throat.

Honestly, I'd take Cirque du Soleil tickets any day over a glass of Remy Martin Louis XIII Cognac, but I have to say I'm really glad I had that experience, because unless we win the lottery, I'm pretty sure it's not going to happen again.

posted on Friday, December 04, 2015
Email ThisBlogThis!Share to TwitterShare to FacebookShare to Pinterest