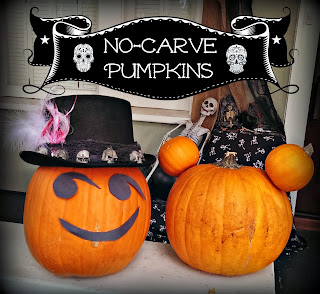 This has been the busiest Halloween season ever!  Usually my decorations are up and ready by October 1 (okay, by the first week of October), but this year we were halfway through the month before I even opened my Halloween box.  We like to carve our jack-o-lanterns at least a week before Halloween night (okay, by the weekend before Halloween night), but this weekend we had so many things going on -- a conference, a party, a school fundraiser, Nutcracker rehearsals, a soccer tournament -- that I barely had time to buy pumpkins, much less decorate them.

Right now it looks like the only time we'll get to carve our Halloween pumpkins is the night before Halloween.... but that doesn't mean we can't transform those pumpkins into fun and cute Halloween decorations!  I decided to turn two of our pumpkins into Mickey Mouse pumpkin and a voodoo man while they're waiting to be carved.

For the voodoo man, all I did was cut out eyes and a mouth from black construction paper and tape them to the pumpkin, then plop a hat over the top of the pumpkin.  I decorated the hat as part of the voodoo costume that Alfie wore to our Mardi Gras-themed auction party, and I didn't want the hat to go back into my costume storage bank without showing it off a bit more!  It's a plain black hat with plastic skulls sewn onto the brim (you can also hot glue them) and a bit of black gauze wrapped around it.  I also dipped white feathers into red food coloring and stuck them into the gauze. 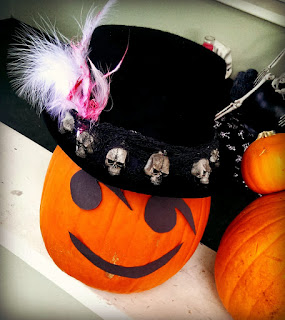 I'm in love with my own Mickey pumpkin!  We had so much fun at Mickey's Halloween Party at the Disneyland Resort a couple of weeks before, I just knew I had to commemorate The Mouse somehow (it also ties in neatly with Disney's new #DisneySide social media campaign, which I'll be learning more about next week).  All you have to do is buy two smaller, round pumpkins and stick them into a larger pumpkin as ears. 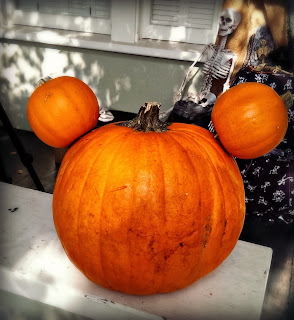 I used long bamboo skewers to secure the pumpkin ears to the pumpkin head (toothpicks won't work, the ears are heavy!).  Here's a tip: don't try using the sharp end of the skewers to poke holes into the big pumpkin.  The pumpkin shell will be too thick, and you'll end up splintering your skewer.  Use an ice pick or a drill or a corkscrew instead. 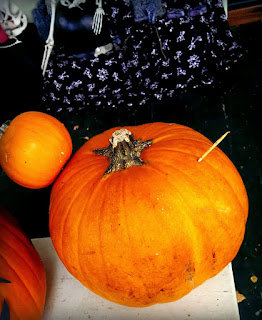 Decorating these pumpkins took less than 5 minutes, and there were no pumpkin guts to clean up!  Sometimes it pays to leave your pumpkin carving to the last minute....