Halloween Costume Watch 2013: Students from The Four Houses of Hogwarts

I'm so excited to be doing a family group costume once again for Halloween 2013! The first and last time I managed to pull it off was in 2007, when we all dressed as pirates.  Then the kids got older and started decided for themselves what costumes they wanted (so inconvenient!).  Fortunately, this year the boys have discovered Harry Potter, and I was only too happy to join them as a Hogwarts student!


Take note, neither of them are Harry Potter (apparently this is a VERY IMPORTANT distinction); 3Po is a Slytherin and Jammy is a Gryffindor because those are the Houses they were sorted into on the Pottermore website.  Buying their robes and ties were easy enough, and I had already made everyone a paper wand.  I also printed Hogwarts crests (one of each House) onto iron-on-transfer paper and ironed them onto t-shirt fabric.  Then I cut the crests out and sewed my makeshift patches onto white button-down shirts that I had bought from Goodwill. Voila, school uniforms! 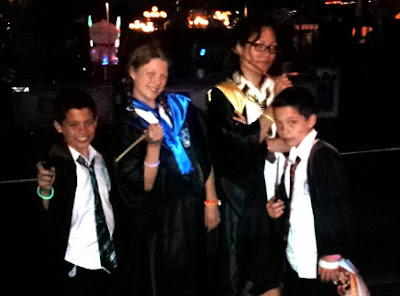 Finding Hufflepuff and Ravenclaw robes were more challenging than finding Gryffindor and Slytherin robes.  The ones we found were expensive, so in the end I made the Hufflepuff and Ravenclaw robes myself -- but that's the subject of another post!  Having students from all four Hogwarts Houses was great, and we got quite a few stares when we wore these costumes at Disneyland for Mickey's Halloween Party.  But for Halloween itself, The Pea wanted to do a group costume with her friends (the Toy Story Aliens costume), so she abandoned her fellow Hogwarts students (again, what's with the independent thinking???  these wretched children).  Fortunately, we still have a 5th family member -- Alfie -- so the Ravenclaw robe will not go to waste.