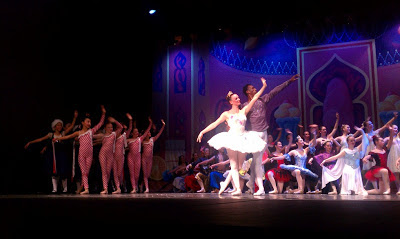 All around the country, Nutcracker ballet performances are springing up like daisies.  From world reknowned New York City Ballet to the smallest dance studio, there's bound to be a Nutcracker near you.  Although you can't beat the grand sets and sheer perfection of the artists at professional ballet companies, there's something to be said for patronizing a Nutcracker performance from a local dance school, particularly  if you have a young child in tow and it will be his or her first Nutcracker.  I'm not saying that just because I happen to have a daughter who performs in her dance school's Nutcracker every year, I'm saying it as a parent who has been watching Nutcrackers, large and small.  Here are some great reasons to take your child to a small Nutcracker performance:


1)  It's way cheaper.  $20 will barely get you a seat in Clara's post-performance Nutcracker tea at the big ballet companies, but it will get you the best seat in the house at a student performance.

3)  If you live in an urban or suburban area, it's highly likely you'll be within a 10 minute drive away from a local Nutcracker, so you don't have to worry about getting stuck in traffic.

4)  Your little one can dress as glittery and as ruffle-y and as sparkle-riffic as she wants; you, on the other hand, can always choose to show up in jeans and a tshirt without worrying about getting thrown out of the theatre for violating opening night dress code.

5)  Some young kids might find the elaborate special effects in a big production a bit overwhelming. Student performances tend to be a lot simpler and less likely to scare away timid first-time Nutcracker attendees.

7)  Local Nutcrackers tend to have local dancers in it, so your little girl has a way bigger chance of running into the Sugarplum fairy at the corner Starbucks (and bragging to her classmates about it on Monday morning).

8)  The snacks sold at intermission are all homemade.

9)  And they rarely cost more than a dollar.

10) And you get the satisfaction of knowing that you're not succumbing to temptation by purchasing that M&M-studded brownie -- you're supporting your local performing arts community.

posted on Friday, December 14, 2012
Email ThisBlogThis!Share to TwitterShare to FacebookShare to Pinterest