The footballing world is in shock... earlier today, Bolton Wanderers midfielder Fabrice Muamba collapsed in the middle of a game, seemingly from a heart attack. Paramedics rushed to the field to resuscitate him after he stopped breathing, then took him to the hospital, where he remains in critical condition. Needless to say, everyone was shocked and upset. The game was abandoned, and fans left in stunned silence.

I found out about Muamba via, where else, Facebook and Twitter. Friends, fans and football stars have been leaving messages of sympathy and support. Sadly, while I scrolling through the search results for "muamba", I found this: 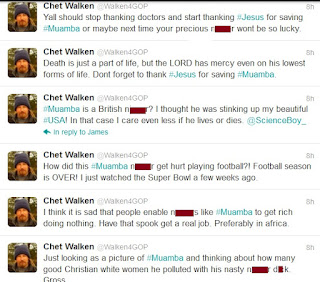 I was shocked. Truly shocked. Muamba is fighting for his life, for Pete's sake! What kind of person would attack and insult a man in such a condition, a man who has never done him wrong? What kind of hatred would prompt such ugliness? Call me naive, but I honestly could not believe that in this day and age, anyone can be as blatantly and openly racist as that. They don't even have the sensitivity (or the sense) to keep their hatred to themselves.

Then again, we've been seeing a lot of racism lately. This bumper sticker has been making the rounds:


In case you don't want to watch the video, let me quote some of the people Pelosi interviewed regarding President Obama:
* This is America. Our president should be American. Not Muslim.* I don't like him. No, it's not because he's black. Because he's a half breed.

Pelosi claims that these interviews were not "cherry-picked" for their shock value, i.e. pretty much everyone she interviewed shared the same views.

Vile as the previous examples may be, at least you can recognize it. It's out in the open. Maybe it's the sly, insidious racism that's worse. The kind that people can deny with wide, innocent eyes. The kind that betrays itself with a simple comment, like assuming you are voting for Obama just because you're black.

Living in my multiethnic Northern California community, it's too easy to believe that everyone is getting along swimmingly, and that racist attitudes, while not completely eradicated, are on their way out. Boy, is that an illusion.

posted on Saturday, March 17, 2012
Email ThisBlogThis!Share to TwitterShare to FacebookShare to Pinterest