Halloween, the day after

I know it's November already, but I can't quite let October go without reliving some of the best moments of the month. We've had so much fun this past month that I wanted to do an October recap post last night, but after two hours of trick or treating with a two week-old cough that just won't go away, I was ready to guzzle down some alcoholic cough syrup and call it a night. I decided to savor the memories (and the Halloween candy) in the morning, so without further ado, here are the highlights of our October: 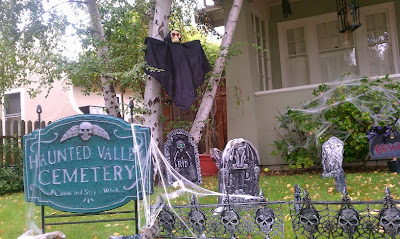 As usual, we started putting decorations up on the first of the month. This year, we focused on our front lawn, turning it into a haunted graveyard.

The boys went on some truly fabulous field trips this month. Jammy's class visited a glass pumpkin patch and learned how artists blow glass to create these delicate works of art. I almost had a heart attack seeing twenty-four rambunctious kids walking beside so many breakable (and expensive) objects, but luckily, nothing broke. 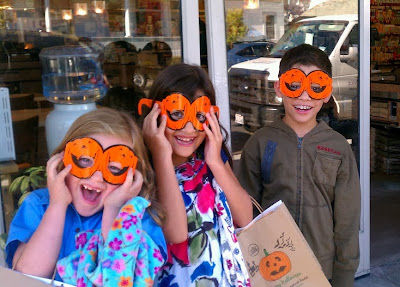 Both 3Po and Jammy's class visited Whole Foods for a behind-the-scenes tour. The kids got to make pizza, learn about organic produce and cage-free eggs, see how to make natural peanut butter, watch sausage being made. The class newsletter advised parents to give their kids a hearty breakfast on field trip day since there would be no time to have a mid-morning snack, but as it turns out, they needn't have worried. The kids (and parent chaperones!) were given plenty of yummy samples: vegan cookies, apples, cheese, peanut butter, smoked salmon, and of course, pizza. I volunteered to chaperone Jammy's class, and when I saw how many free samples I could score fun it was, I made sure to chaperone 3Po's class as well.

October is always a great month for fun treats, and this year was no exception. This year's Halloween party treats were worm & dirt cupcakes and candy corn pizza -- sooo easy to make, so cute to look at, and so deliciously yummy! 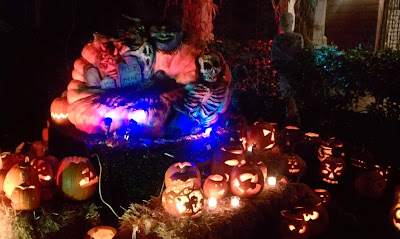 As October 31 got nearer, homes around the neighborhood started putting up their decorations. This is the front yard of Google exec Marissa Mayer; she's well known for her amazing Halloween decorations and her generous (as in movie-theater candy sized) trick-or-treat candy. By Halloween night, her front yard also had a gigantic, elaborately-carved pumpkin, flanked by dozens upon dozens of carved and lit jack-o-lanterns. It's a beautiful sight, and always draws crowds on Halloween night.

Our own jack-o-lanterns were much simpler, but we had so much fun carving them. The day before Halloween, some friends came over for lunch and we had a pumpkin carving session -- but not before posing for the camera in our fab costumes.

I think this must be the kids' biggest haul of loot yet. Now that they're older, they march (okay, run) from house to house, not bothering to dilly-dally and admire the decorations, so as to maximize the number of houses they covered before we finally said enough. I'm almost ashamed to admit that The Pea's pillowcase actually tore a hole in the bottom from the weight of all that candy. Fortunately my dad is visiting, and he's happy to buy most of their candy from them and take it back to the Philippines, where my mom's office co-workers are only too happy to munch on American candy!

Here's hoping that your October was as fun (though hopefully not as sugary) as ours!
posted on Tuesday, November 01, 2011 Labels: holidays
Email ThisBlogThis!Share to TwitterShare to FacebookShare to Pinterest