Future U.S. President (and other delusions of grandeur) 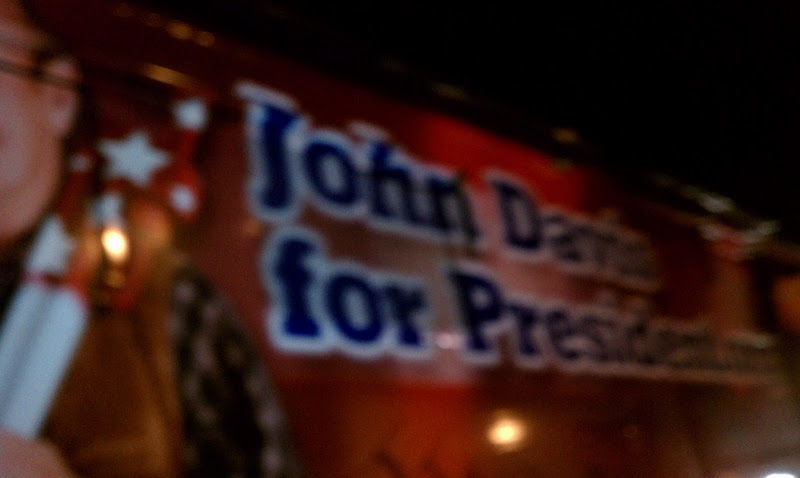 Last week, while stuck in traffic on San Francisco's Bay Bridge, we found ourselves beside a tour bus with the words "John Davis for President.org". The side of the bus pictured a man shouldering a giant plumbing wrench, painted like the American flag, beside the words, "Let's fix America". In the background was a gigantic American flag, a section of the U.S. constitution showing the words "We the People". The bus also had a giant bald eagle on the sides and back (and I do mean giant -- the eagle was bigger than John Davis).

Hmmm.. I've been following the Republican debates, and I'm pretty sure the only John I've seen is John Huntsman.

So who is John Davis?

I checked Wikipedia, but the only John Davis I saw running for president lost to Calvin Coolidge in 1924. Alfie and I had never heard of him, and I wasn't sure the tour bus was for real, so I went on his website (gotta love smartphones for instant gratification!) to check out his platform and resume.

Here are his qualifications:

Husband, father of 6, grandfather of 4.
6th generation Grand Junction, CO resident.
High school diploma.
Self-employed (I later found out that he is the head of Blue Star Industries in Grand Junction, which sells building materials and supplies)

I couldn't find a specific platform or plan on his website, but I did find a Contract to America, with the following list items:

And why does John Davis think he should be president? Here's his answer:
I love God and I love America. I am dedicated to my family, to God, to my community, and to my country.

By the way, John is in it to win it. According to his hometown paper, the Grand Junction Sentinel, He intends to win the Republican nomination rather than run as a third-party or independent candidate. You'd think that any serious candidate would be taking part in the Republican debates, but John has an answer for that too: “We don’t have time to go to the debates.” That does make sense, since he intends to visit every single county in the US -- and there are 3,200 of them -- during his campaign tour.

One last bit of insight: He also said that, once in the White House, he will post a sign saying, “As for me and my house, we will serve the Lord.”

So why am I wasting so much time and blog space on this nutcase? I don't know. He reminds me of the people on American Idol who think they sound like Aretha Franklin when they actually sound like Franklin the turtle; their parting words for Simon Cowell are always something like, "You'll regret this, Simon, I'm a superstar and I'll show you!". I think I wrote about this because I want to throw the following question out to the universe:

Why does anyone think that a mere desire to serve their country qualifies them to be president? And why do they think that being an "ordinary, common man" will make people more likely to vote for them? Don't they want someone special, someone extraordinary, to lead their country? 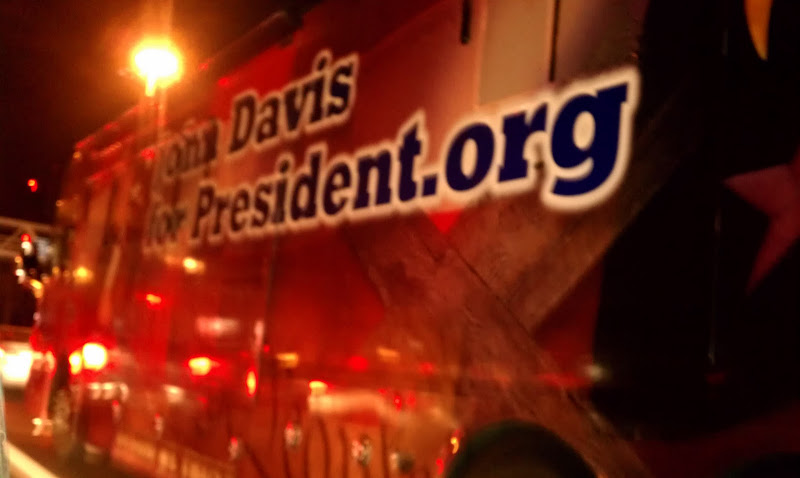 Someone, please answer me!

In the event that I'm just shouting into the ether and no-one answers, I thought I should post these photos anyway -- because maybe one day I'll be telling my grandchildren, "I was once stuck in a traffic jam with the president of the United States!".
posted on Sunday, November 20, 2011 Labels: random things
Email ThisBlogThis!Share to TwitterShare to FacebookShare to Pinterest

Well you taught me something! I do not think he will win -- for a variety of reasons. But, a tiny piece of me appreciates or maybe wishes that our campaigns and elections weren't so money driven so that someone REAL could actual run for office and have a fighting chance. Politics these days is a joke.

Personally the "extraordinary" people have not been doing that great of a job lately so why not? What is wrong with being ordinary? Lots of great people in history would not catagorize themselves as extraordinary or special. They would catagorize themselves as just ordinary people doing what needed to be done. That is something most ordinary people can relate to and appreciate.

I don't think he will win the nomination for a variety of reasons but his attitude is refreshing.

I never knew taht about him until I read your post. I just wish it will be someone who really will do good for our country and help our country grow.

The sad truth is that ordinary people do not make good leaders -- leaders make good leaders. I am not just talking about educational qualifications; look at Bill Gates, he began a computing revolution and became the richest man in the world, and he was a college dropout. Same with Mark Zuckerberg. These people have intelligence, drive, charisma, confidence. That is NOT ordinary.