Why the Number Nine Scares Me 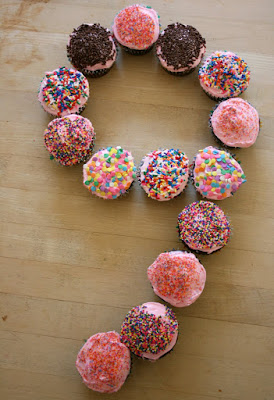 As I write this, it's almost exactly nine years ago today (she was born at 8:50PM on April 6, 2001 and it's now 8:52PM) that The Pea made her screaming, messy, dramatic entrance into the world. I can't believe she's nine. The other night, when I was looking over at the birthday cards displayed on the mantel, I saw one with a huge, swirly, glittery and exceedingly pink number 9 in front, and I panicked. I thought, with no doubt in my mind, I don't want her to be nine.

I didn't feel this way when she turned six, or seven, or eight. Somehow Nine has become the age where I feel like she's no longer a little girl. She's still young enough to want pink cupcakes and pastel sprinkles, but now she wants iPods and Uggs instead of dolls and stuffies (sad, but inevitable). She wants an allowance (I've been expecting this for a while). She wants to walk to and from school by herself (in your dreams, kid!). I look at her face and I see lines and angles instead of curves and dimples. I think I can see a hint of the woman she will become.

Those nine years seem to have disappeared more quickly than the cupcakes in the photo -- and if the next nine years go by as quickly as the first nine did, I'm going to have to strap a videocamera to her forehead so I can capture every single precious moment.

But I have to hide my sadness and put on my happy face and let her know that there's nothing that excites me more in the world than to have her be nine, wow, nine, almost ten, what a big kid you are now! Only this blog knows how I really feel.

I could really use one of those pink pastel cupcakes right now.
posted on Tuesday, April 06, 2010 Labels: birthdays, food, Pea
Email ThisBlogThis!Share to TwitterShare to FacebookShare to Pinterest

awww...sweet! happy birthday to the Pea! we love you guys!

Belated Happy Birthday to The Pea. Mine is 5 and wants an allowance now. It is bittersweet to have your kids grow up.

Awww, the kids do grow up too fast it seems. But the fun grows too. Enjoy her.

Wow...yeah. I can understand how sad it is to miss those precious and fleeting moments of toddlerhood. But it is a sweet and holy sadness, if you know what I mean. It is the fruition (in progress) of all you've worked so hard to do: keep her safe and healthy, teach her right and wrong, guide her as she grows. Try to enjoy the melonchaly sweetness. It will seem like no time before she brings you HER babies!! (Yikes, maybe that's NOT what you wanted to hear?!) :)

Well, at least take some comfort in the idea that you're not alone. It is an inevitable emotion when you're raising the kids you love so much.