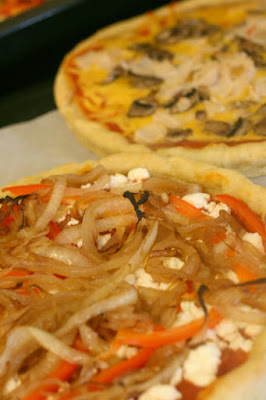 A couple of weeks ago Alfie came home from Morrissey's concert in Berkeley with a bunch of stickers that declare "Meat is Murder", "Fish are Friends, Not Food" and "Jesus Love Me, Too" (with a picture of a cute little chick). Morrissey is a pretty militant vegan and has some pretty strong views about people who eat meat. I looked at the stickers and pamphlets -- and went on eating my chicken nuggets.

Am I cruel and heartless because I eat meat? I don't think so, and to my mind, being accused of cruelty and murder doesn't seem like the way to get more people to become vegetarians. If activists want to change people's behavior, I think they ought to focus more on the benefits to people rather than attack their values and get them on the defensive.

Yes, I disagree with inhumane treatment of animals in slaughterhouses and cages. It's unnecessarily cruel, and the thought of eating a product of those filthy, crowded, possibly disease-ridden conditions is really not appealing. It's enough to get me to buy cage-free eggs and free-range chickens. And I'm happy to cut down on our meat consumption because it's good for the earth and good for our health. In fact, we've been eating far less meat this year, and we haven't really missed it in our daily lives. I'm happy to eat a yummy lunch of goat cheese pizzas with caramelized onions and peppers, or pack a hummus and pita in my kids' lunchbox, or have my favorite cauliflower and white bean soup for dinner.

But I'm not ready to give up meat or eggs or fish entirely! I'm comfortable with the fact that humans are at the top of the food chain. Besides, many cultures don't have the luxury of considering the feelings of the goat that they need to kill and feed to their kids in order to survive. Humans have been eating meat since the beginning of time, and I'm not sure activists screaming bloody murder will change that.
posted on Wednesday, December 16, 2009 Labels: about me, Alfie, food, things that matter
Email ThisBlogThis!Share to TwitterShare to FacebookShare to Pinterest

I agree--I could never give up meat completely, but I do enjoy occasional veggie meals.

Here's the thing, as you know, slaughter houses are cruel places for animals. By funding these companies (through buying their product) you contribute the the cruelty. I'm not trying to be mean - these are simple facts. If you don't think you are being cruel then you would at least have to admit you are being cruel by proxies.

The situation we find ourselves in is odd. We love animals and most of us (not you) mindlessly contribute to their suffering. I won't go into explaining how this weird situation came about but it's why someone, such as yourself, can contribute to animals cruelty even though you don't *feel* like you are a cruel person.

THE WORLD IS VEGAN.

If you want it.