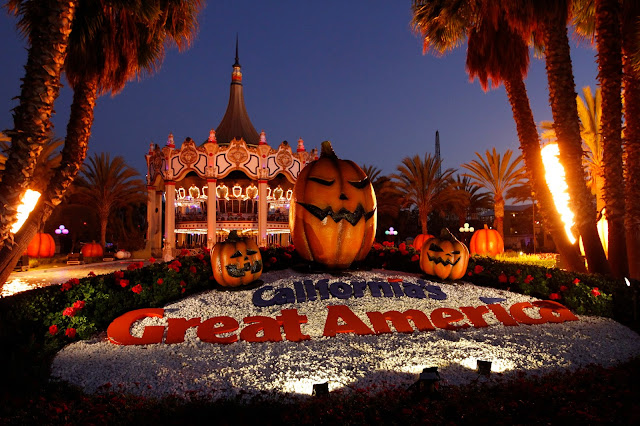 We've been going to Halloween parades and festivals since the kids were babies, and now that they're older, we're starting to get into the spookier side of Halloween. This year we visited our first honest-to-goodness haunted house. To be more precise, we visited five, and all were at California's Great America Halloween Haunt. I fully expected to hate it -- not that I think any of those monsters are real, but I hate getting startled -- so it was a pleasant surprise to find myself having fun!

For Halloween Haunt, Great America offers ten haunted mazes, three Scare Zones, and about half a dozen entertainment stages. I've covered the bare bones in a post over on Bonggamom Finds, so I won't repeat it all here. If you want to find out what Halloween Haunt is all about, go to my post: Everything You Need to Know about Great America's Halloween Haunt. Keep reading for the scoop on our favorite attractions at the event:

Alfie, the 2 boys and I entered five haunted mazes: Dia De Los Muertos, Roadkill Road House, Madame Marie's Massacre Manor, Toy Factory, and Wax Museum Chamber of Horrors. The Pea (who had gone the week before with a friend) could only muster up enough courage to venture into one maze, Dia De Los Muertos. As it turned out, Dia De Los Muertos was the least scary maze and the most artistic, so she chose the perfect maze for her. 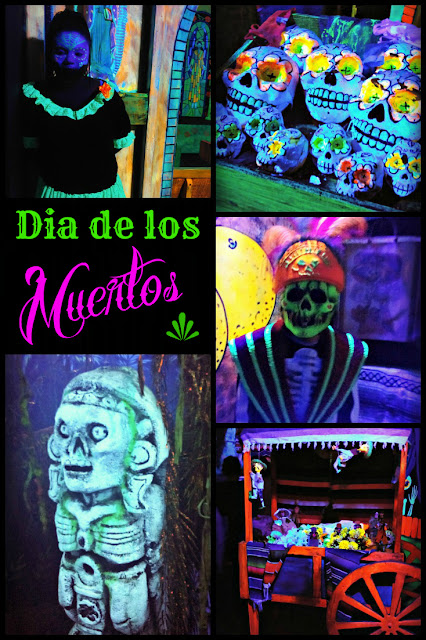 The Dia De Los Muertos maze takes you to an 18th-century Mexican pueblo and market. Everything is illuminated in black light, which made everything (including the people who wander through the maze!) creepy and beautiful at the same time. 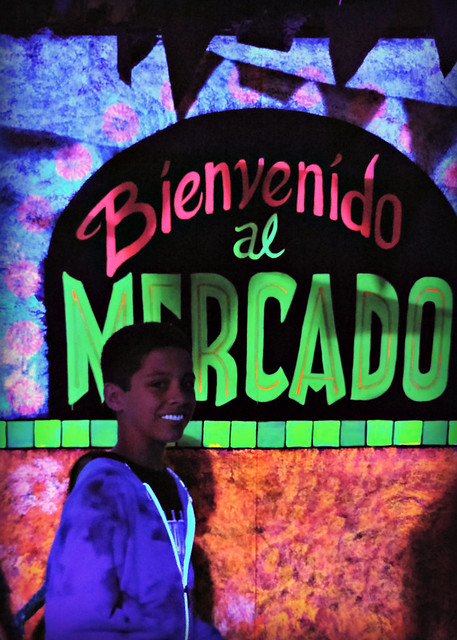 The artwork on the maze walls is simply stunning. 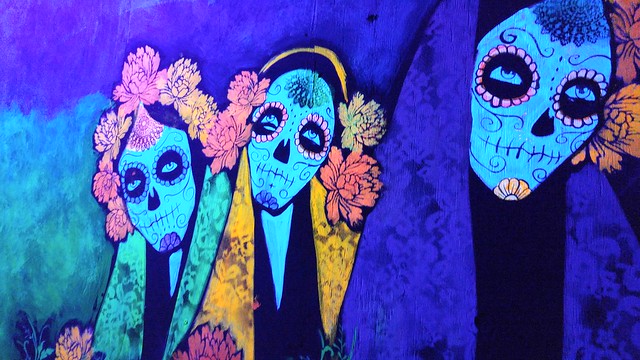 Having the black light was great, because you could see and appreciate every last detail. All the other mazes were dimly lit, and many areas had blinding strobe lights to disorient you even more. 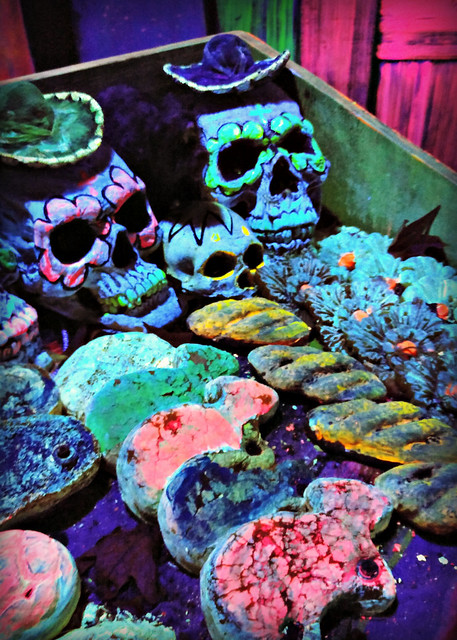 I took tons of photos because the light was decent. All the other mazes were dimly lit, so I apologize in advance for the quality and quantity of photos from this point onwards! 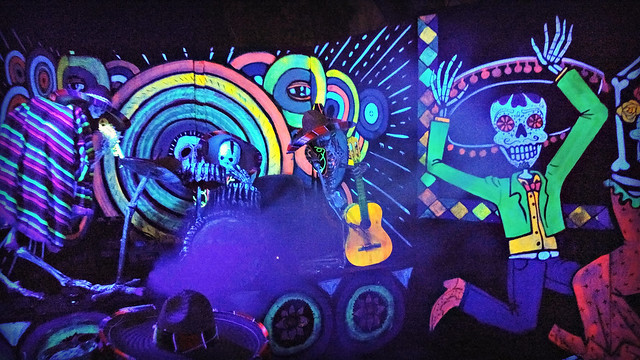 Beautiful as the Dia De Los Muertos maze was, it wasn't our favorite maze. That honor belongs to the Wax Museum Chamber of Horrors. 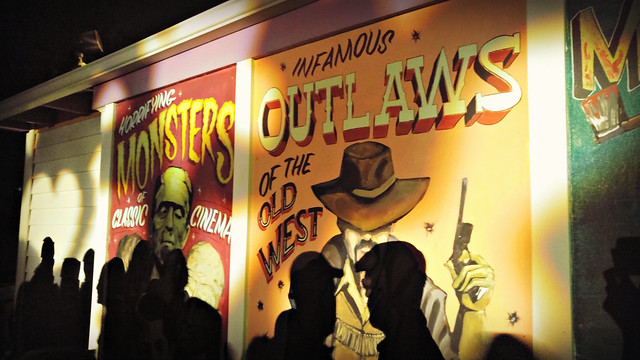 As the name implies, this maze was decorated to look like a museum of famous bad guys like Frankenstein, Billy the Kid, Attila the Hun, the Hunchback of Notre Dame, Al Capone, and more. 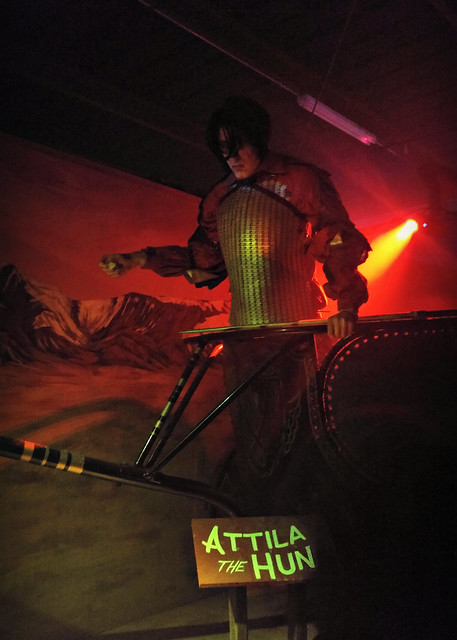 What's great about this museum is that you see people all around you, but you have no idea whether they are wax figures or live actors. They don't have to resort to popping out of dark corners; they can keep the element of surprise up until the last second. To confuse visitors further, there were a bunch of creepy mechanical dolls, robotically moving back and forth. The worst fright of the night I got was inside this maze: We walked past a huge, messy pile of bandages on the floor, when a mummy rose up from the middle of the pile and said hi. Brilliant! 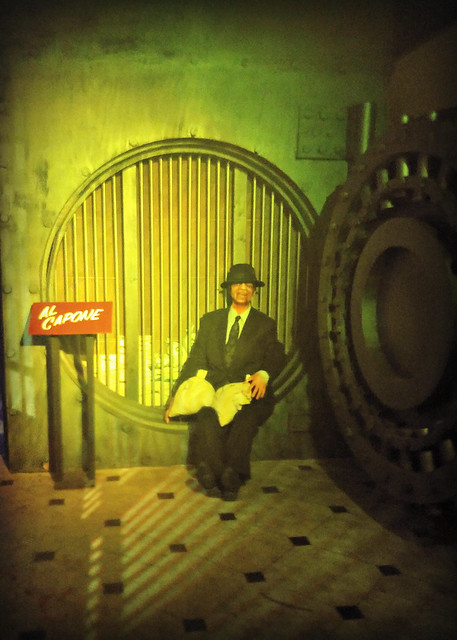 Even when you know the actors are there, even when you see them, they seem to have a knack for catching you off guard and startling you when you don't expect it. I wasn't expecting to be scared at all, but I have to admit that my heart was racing and my nerves were on end -- not because I thought any of it was real, but because I never knew when someone would startle me. Jammy fell on the floor a couple of times when he backed up after someone appeared out of nowhere, and I have to admit using the kids as human shields on more than one occasion!

I mentioned earlier that The Pea only entered one maze -- but she did get her fair share of zombie scare while walking through the Scare Zones, which are set on the main loop, so in order to walk a full circuit around the park, you have to pass all three Scare Zones. The zombies do try to scare you, but you can see them coming from a mile away, so you can prepare yourself. You can also purchase glowing "No Boo" necklaces to let them know you don't want zombies to approach you (note, these necklaces don't work in the haunted mazes). 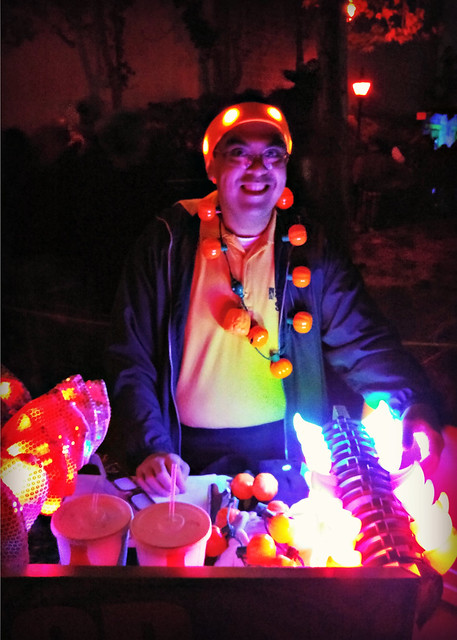 Our favorite scare zone was Evacuate, which was made to look like a highway of abandoned cars. Zombies popped out of the cars to say hi, and some of them even slowed down long enough to let you take their photo. This particular scare zone had two paths, one marked in red lights and the other one marked in green lights. We figured the green path was for people who didn't want zombies to startle them.  Others might find the Killer Clown Town scarier, but I don't find clowns creepy or scary at all 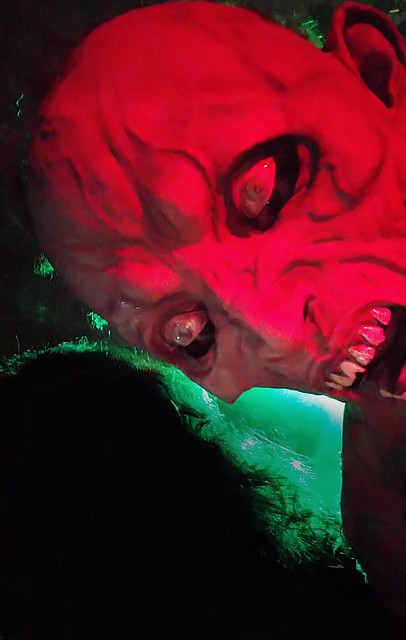 We didn't have time to check out all the shows, but we did catch a group of drummers performing at Planet Snoopy. Their drumming was amazing, and they had a few special effects like neon drumsticks and a shower of metal sparks. It was a great, high-energy performance, and the following acrobatics act just couldn't compare.

Did you know that most of the park's regular rides are open during Halloween Haunt? We didn't have time to go on any of them, but I'm including them anyway because my kids love these rides and you get to do the rides in the dark.  They're a great option for people (like The Pea!) who are too scared to do the haunted mazes (or need a break from all the scare and gore) but still want to enjoy the park during Halloween. 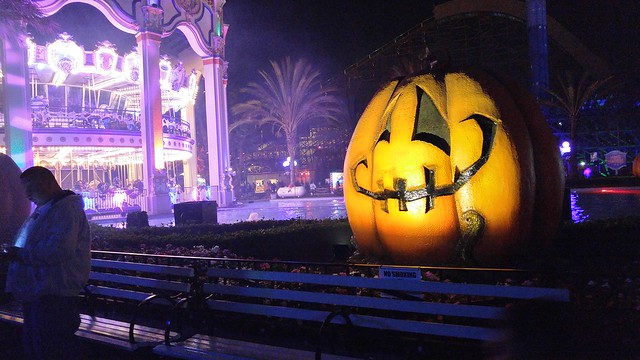 We were at the park from around 8PM till just after 11PM. Wait times ranged from 20-45 minutes (although one couple we were in line with said the line for the Roadkill Road House had stretched to 2 hours the night before!). If you want to hit all the haunted mazes in a single night, definitely splurge on the Fright Lane passes to cut your wait time (for haunted mazes only) considerably.