Levi's Stadium: The good, the bad, the ugly. 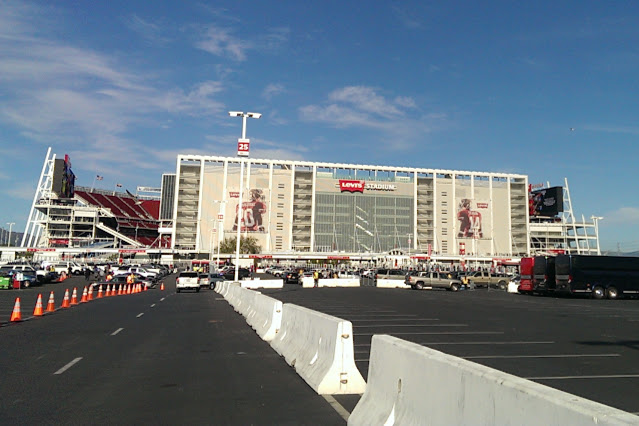 This weekend Alfie is watching Manchester United play FC Barcelona in the International Champions Cup. I'm green with envy! These are two of the biggest football clubs in the world, and even if only a portion of their first team plays, it's going to be an amazing match. Hopefully he'll get to see the (un)holy trinity of strikers -- Messi, Suarez, and Neymar -- match skills against Van Persie, Rooney, Mata, and more. What's more, they'll be playing in one of the best new stadiums around: Levi's Stadium.

Levi's Stadium is the home of the San Francisco (um, not quite accurate any more!) Forty-Niners football team. The new stadium is located right across the parking lot from the Great America theme park in Santa Clara. I visited Levi's Stadium for the first time early this year for a Monster Truck event, and immediately understood why so many people love this place.  Here are the top 3 reasons I think Levi's Stadium is great:

Size
The stadium is HUGE.  It holds 68,500 people and it's really impressive. 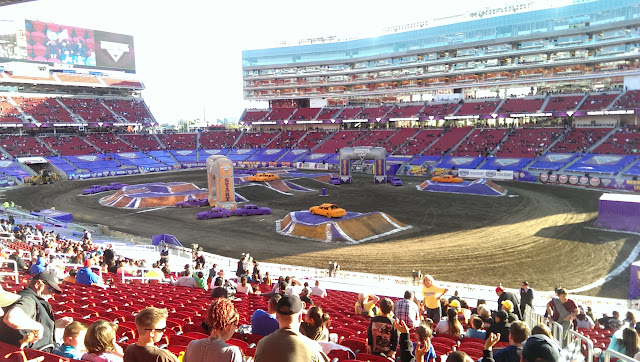 Innovation
The stadium takes advantage of all the latest technology. Levi's stadium is the first United States professional football stadium to have achieved LEED Gold certification, with many sustainable features like a green roof, solar panels, and reclaimed water irrigation system. People with tickets to a Levi's Stadium event can use their Stadium app to purchase parking passes and order food at the stadium -- you can either pick it up at an express lane or have it delivered to your seat!  Other hi-tech conveniences for fans include charging stations (yes!!) and giant screens that show all the action. 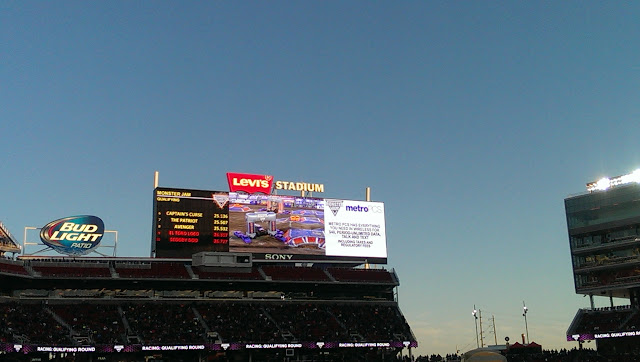 Food
Yes, they serve the usual hot dogs and fries and burgers pretzels, and pizza, but I love that they serve so many other things to eat! You can get fish and chips, curry, German sausages, and more. 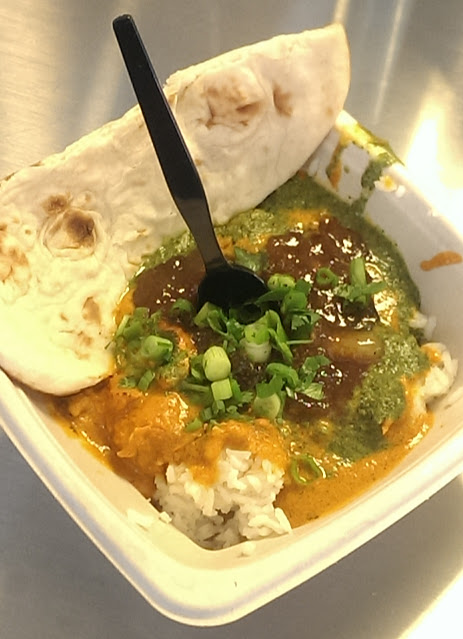 Now, on to the dark side. There are two things I dislike about this stadium and the team that runs it: Traffic management and Community Relations. I understand that with 68,000 people descending on a single location, there is bound to be traffic, and I do commend management for attempting to plan ahead. However, traffic is still a mess around the stadium. Despite their best efforts, traffic flow can be really confusing, especially if you're not the kind of person who does online research before the event, or checks Twitter for traffic updates. Parking is expensive, and if you don't buy parking passes well in advance (online), you'll end up parking in a satellite lot miles and miles away.

What's worse, if you aren't attending an event at the stadium but are headed somewhere near it, you'll be redirected to parts unknown without any warning. That happened to me when I picked The Pea up at a dance convention located right across the stadium. I was forced to turn right when I wanted to go straight, and it took me a good twenty minutes (our van doesn't have GPS) and a few panicked touches of my phone (to get GPS) to find my way back.

That brings me to the second problem: being seen as a money-hungry asshole by everyone around you. The 49ers have not exactly endeared themselves to the local community. For example, they've struck a deal with Great America to have the park close down on game night, which is great for Levi's Stadium (more parking) and Great America (more money), but not great for families who want to visit Great America. The team was also involved in a controversy over soccer fields that they promised to build for the local community. Not only did they renege on their promise, they put in a bid to the city to purchase the soccer fields beside the stadium so they could turn it into parking lots, leaving hundreds of youth stranded with no soccer fields to play on.  Fortunately, the local soccer moms got up in arms and convinced the city council not only to vote to reevaluate the proposal, but also to return a donation made by the 49ers to the city, citing "conflict of interest". It's good to see kids and families win against corporate greed for once.  Hopefully the 49ers will get their act together and show everyone that they're as pretty on the inside as they are on the outside. 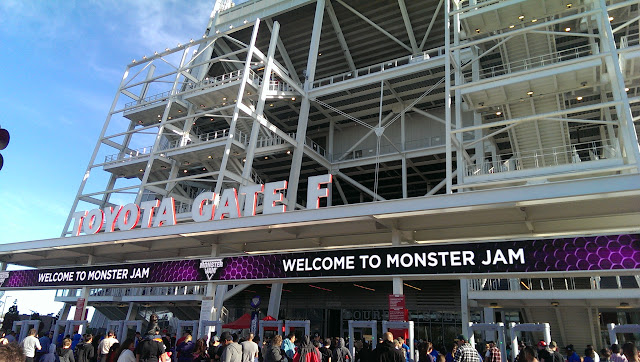