Getting my kicks on Route 66: running through the Disneyland Resort 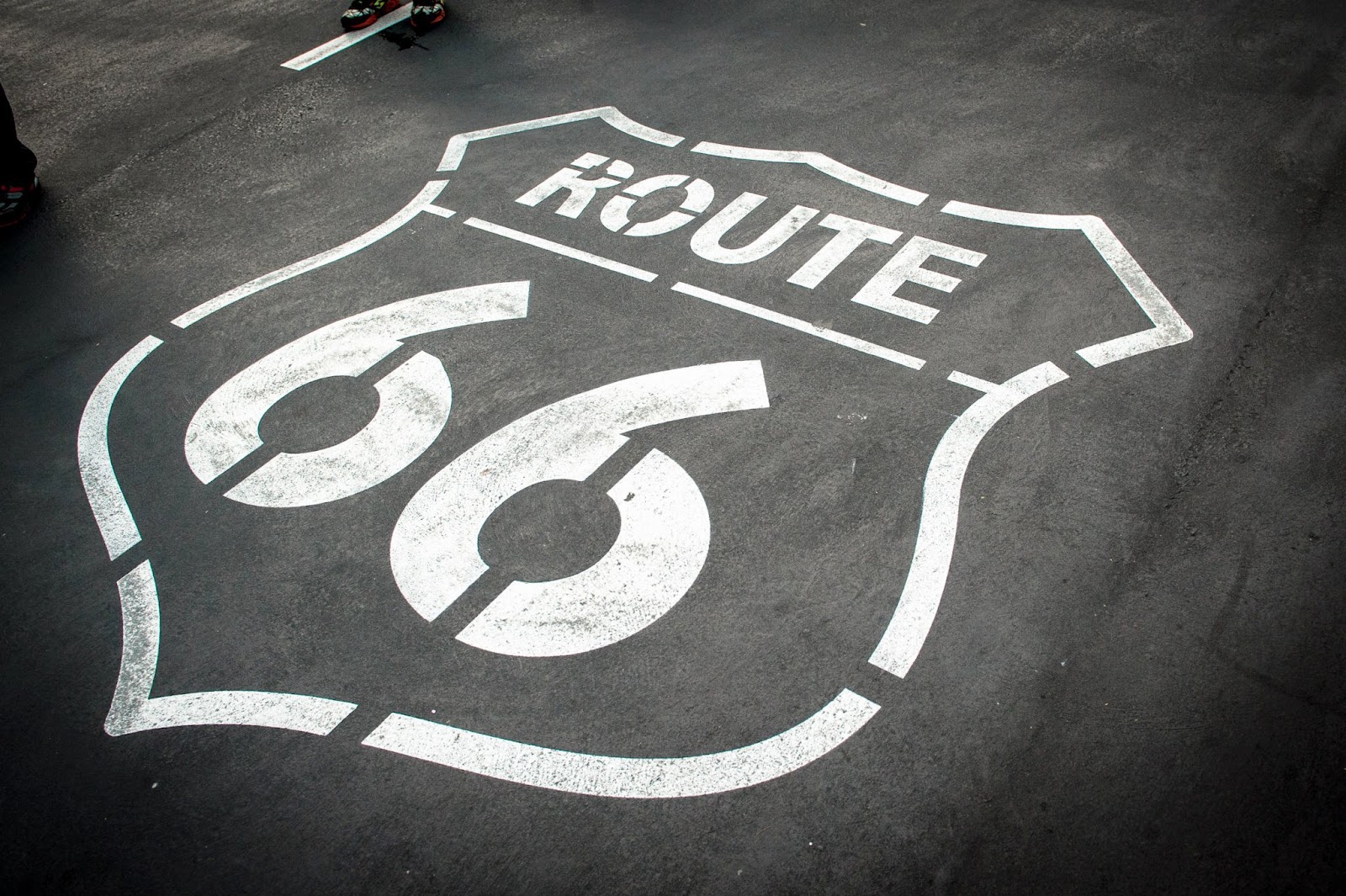 Of all the magical events in store for the attendees of Disney's Social Media Moms Conference, the one I was most looking forward to was the 2 mile fun run.  I've always wanted to do a runDisney race, and although this wasn't an official race, it's the next best thing.  I can't think of any fun run more fun than this one (shades of Dr. Seuss there): what could be grander than running through the Disneyland Resort?

I was lucky to be in the first wave of people to receive invitations to the conference, because sign ups for the run were limited, and the space quickly filled up.

Despite all the late nights and early mornings, everyone got up bright (okay, it wasn't bright at all) and early to meet outside the ESPN Sports Zone at Downtown Disney.  The event sponsor, runDisney, gave us some updates on their runDisney events (their newest run is the Avengers Super Heroes Half Marathon weekend, which is already full -- it sold out in just 2 hours!) and gave us a sneak peek at two of their latest medals, the Disney Wine & Dine Half Marathon medal and the 10th Anniversary Goofy Challenge medal.  The other event sponsor, New Balance, shared the four elements of running with Good Form:  Posture, Midfoot, Cadence, and Lean. 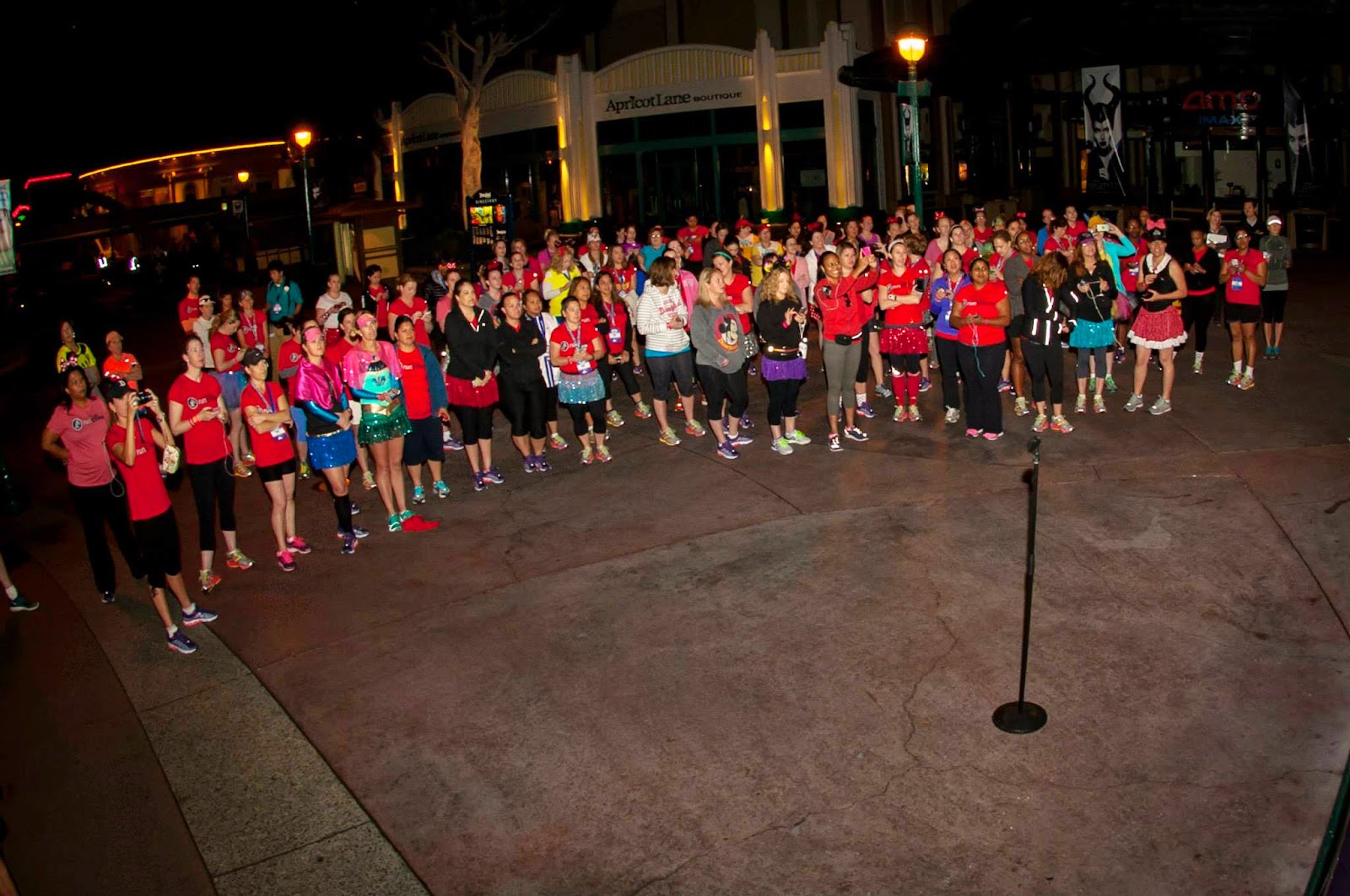 Most of the runners paired their new red runDisney shirts with running pants, shorts, tutus or sparkle skirts, but many wore costumes.  We had The Hulk, Thor, Black Widow, Tweedle Dee and Tweedle Dum, Olaf, and a couple of Annas running, along with quite a few running as Minnie Mouse, including me.  I was determined to run my very first runDisney event in true Disney style!  I sewed a collar onto one of my running shirts, sewed Minnie ears and a bow onto a cap, and sewed my own ruffled Minnie skirt.  I was so happy with how my costume turned out!  I wasn't bothered by my lack of originality; rather, I was thrilled to be running with so many other Minnies, and I think my fellow Minnies felt the same. 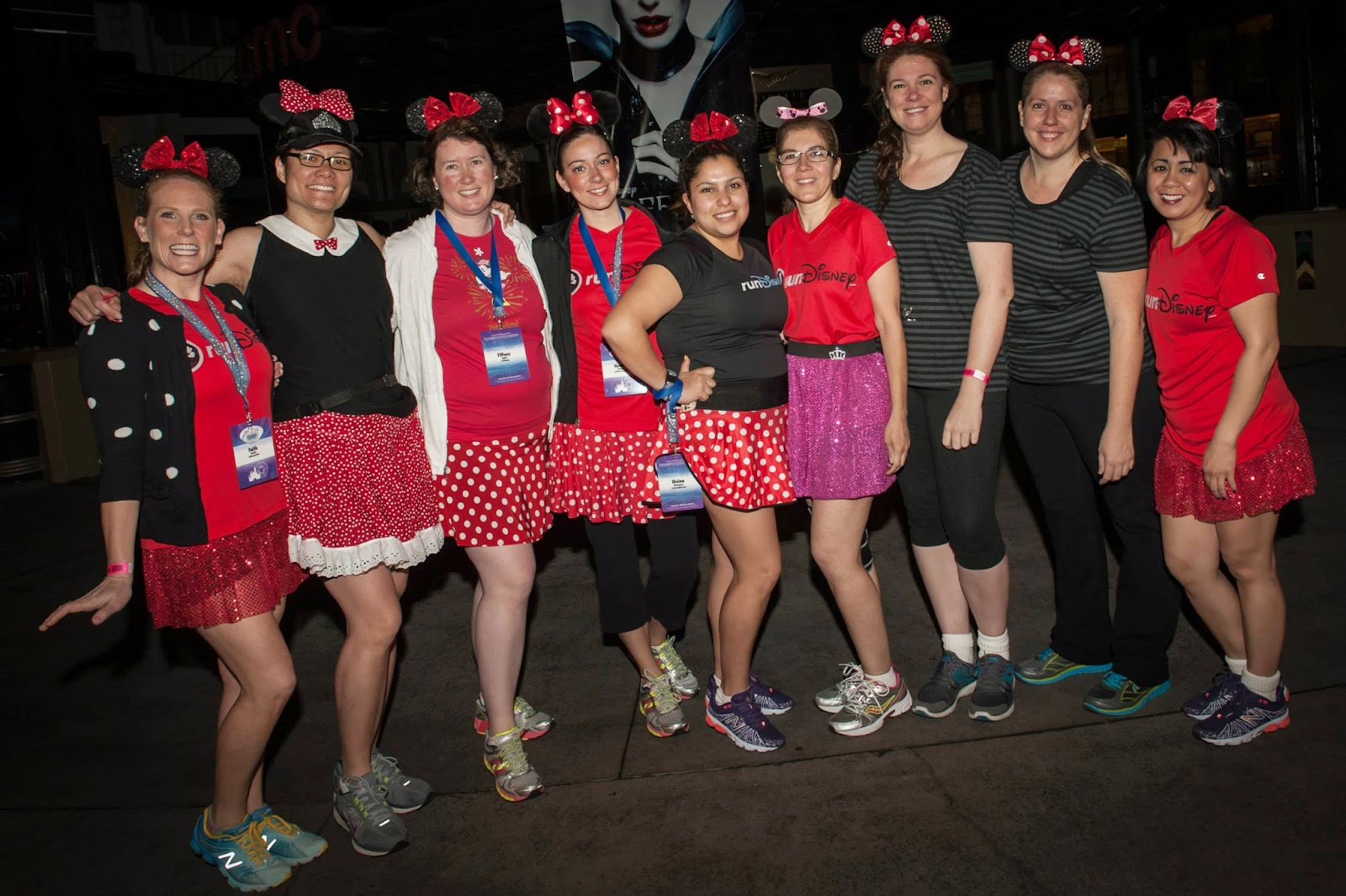 At 6:15, everyone gathered under the Start Arch, and we took off.  The pack split into 2 groups: a running group and a run/walk group.  The run group leader announced we would be maintaining a 10-minute mile pace, so I knew I'd be able to keep up. 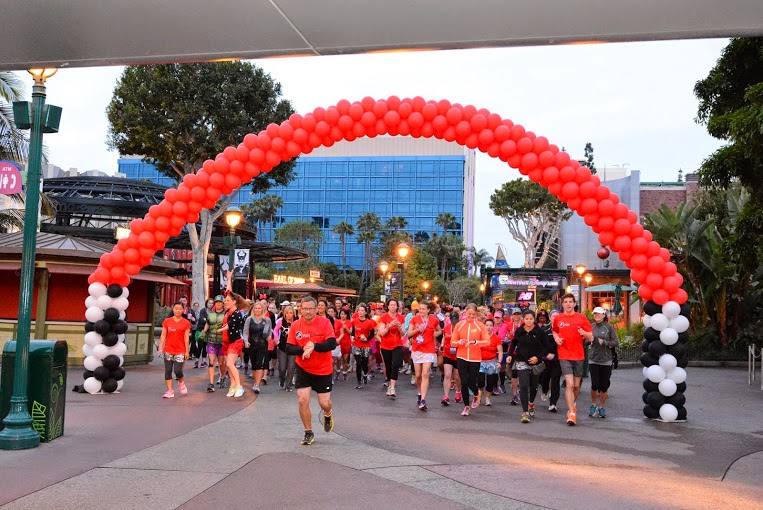 When I first saw the course map (a couple of days before the event), I did a double take.  It looked much, much longer than 2 miles!  Start at the edge of Downtown Disney, enter Disneyland, go down Main Street USA, enter Frontierland, go behind Big Thunder Mountain Railroad into Fantasyland, run through Sleeping Beauty's Castle, back down Main Street, out of Disneyland, into Disney's California Adventure, pass Condor Flats and Grizzly River Run, around Paradise Pier, cross the bridge, run past Bugs Land, and into Cars Land.  All of that, and only 2 miles? 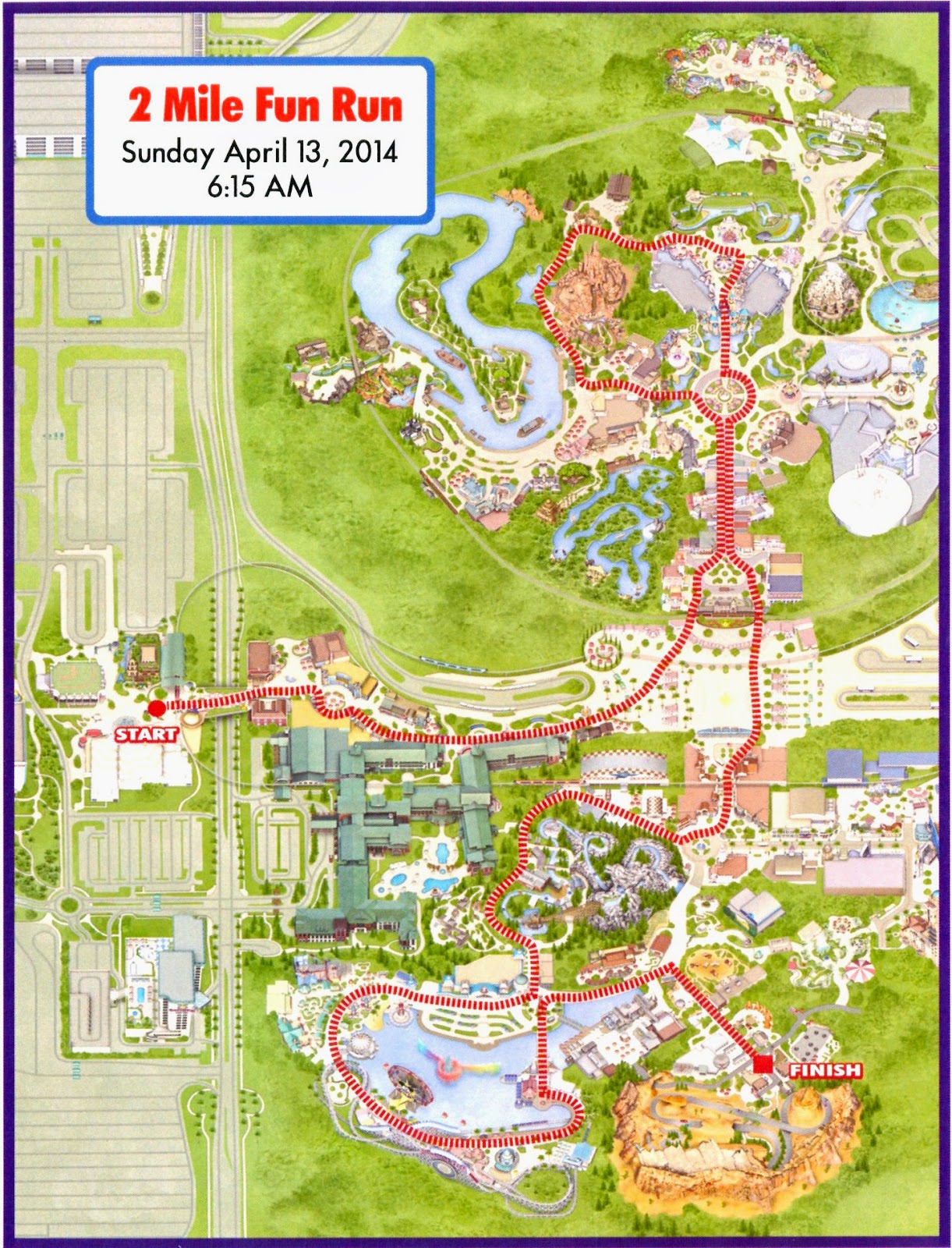 It actually ended up feeling like less than two miles. The whole thing passed by way too quickly!  I made my way to the front and stayed there the whole way.  Don't look so impressed, remember I said we were being paced at a 10 minute mile.  Actually, we were running faster than that, because we were asked to stop 2 or 3 times to let the rest catch up.

When I look at that map now, it's difficult to remember myself running all that way.  I do remember running down Main Street, running past King Arthur's Carousel in Fantasyland, running underneath the drawbridge at Sleeping Beauty's Castle, running through the California Adventure turnstiles (where they handed each of us a little Cars Land flag), running up the incline at Paradise Pier (the first time I felt any sort of strain), and of course running down Cars Land's Route 66 to the finish line.  I remember looking up at the dawn sky and thinking the conditions couldn't be any more perfect for a run.  I remember thinking how peaceful and beautiful the park looked as the sun rose. 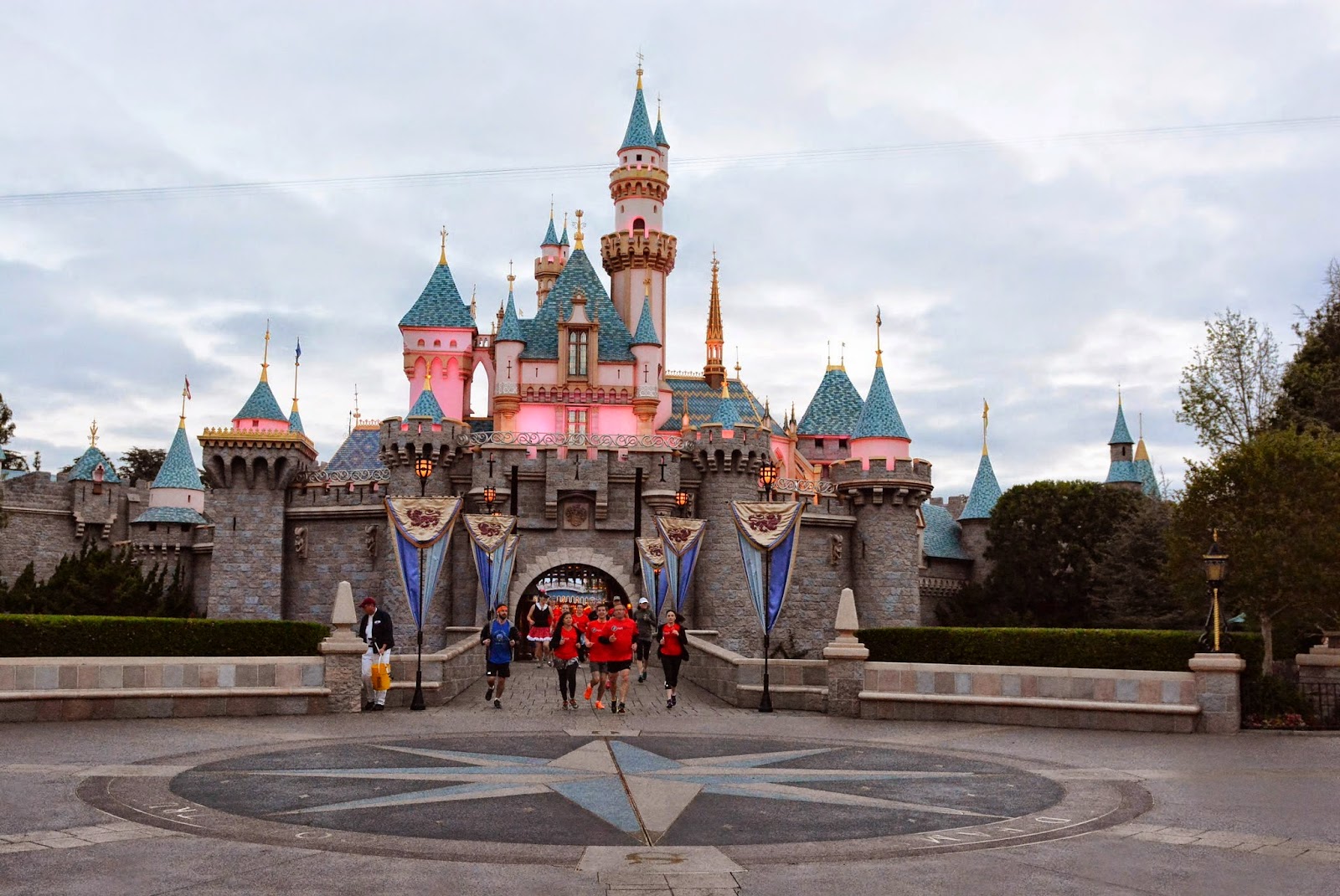 I  felt wonderful throughout the run.  Running in an event is always easier, and I always run faster than my regular pace, but this time, I was so happy, I really felt like I was flying.  I had my runDisney playlist blasting into my ear and it's a wonder I didn't spontaneously break out into song.  I kept thinking to myself, I'm running through Disneyland, this is sooo cool.  I was almost sorry to see the finish line because I wanted to keep running. 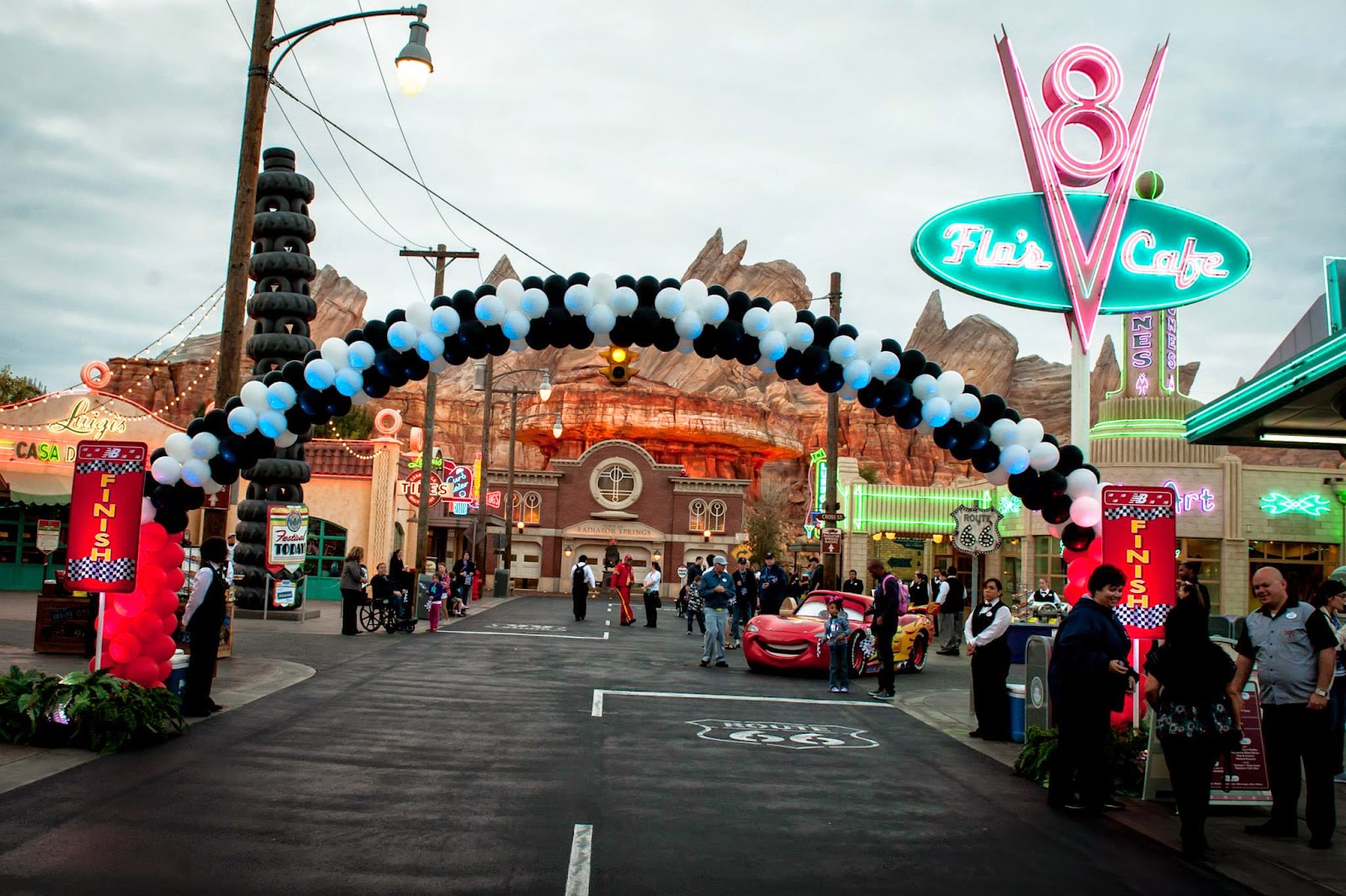 As we approached the finish line, I was still bursting with energy.  I kept looking across at everyone, wanting to sprint to the finish, wondering if anyone would.  I decided not to try; first of all, it wasn't really a "race", and besides, I was sure that if I started a sprint, there would be lots of people who could cover the remaining 100 meters a lot faster than I could! 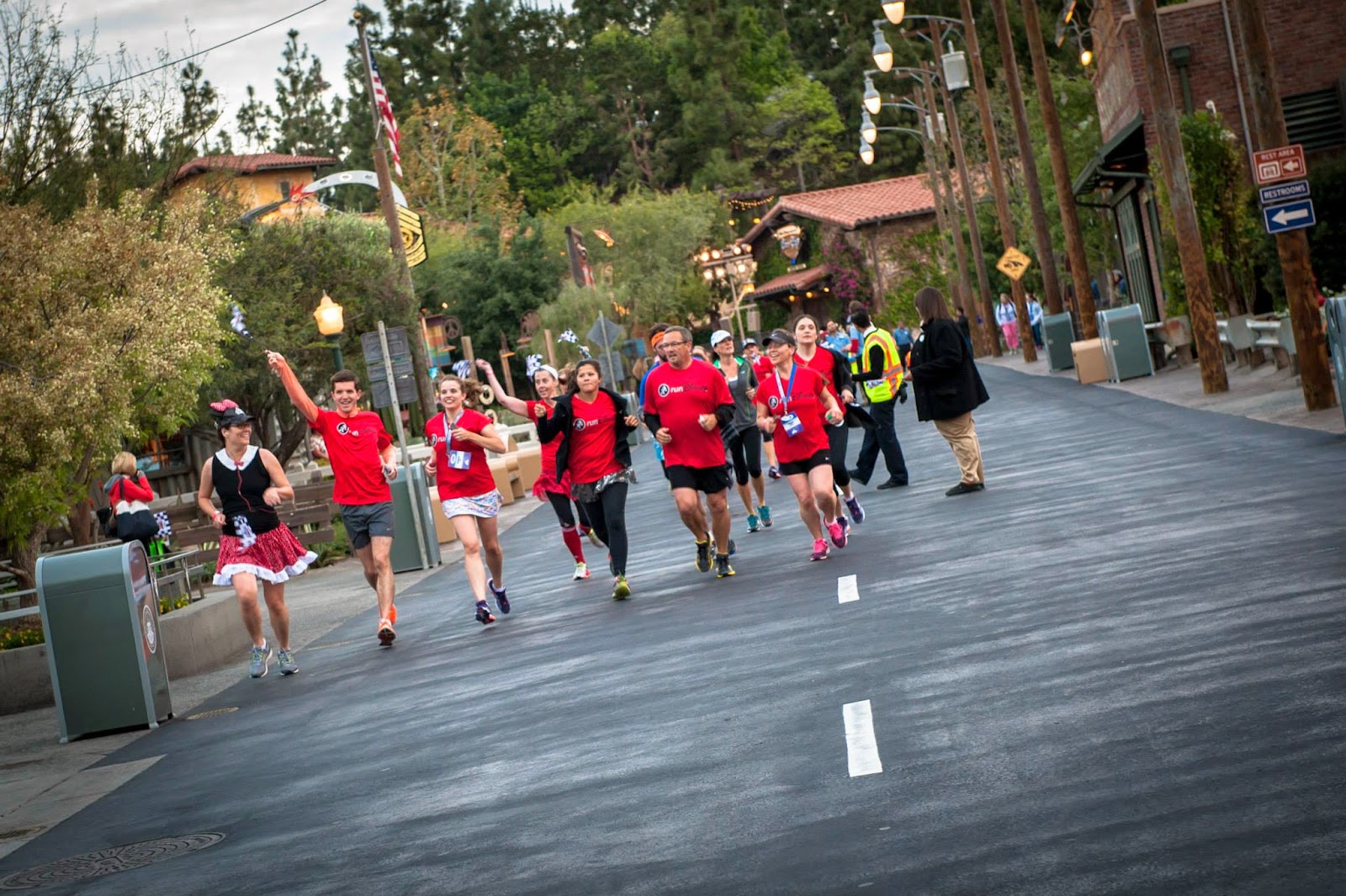 We crossed the finish line together, almost exactly 20 minutes after we started.  Runners streamed in for the next 10 minutes or so, and as the crowd grew (by this time, family members had started arriving for the Cars Land breakfast), so did the cheers and encouragement for everyone who was finishing. 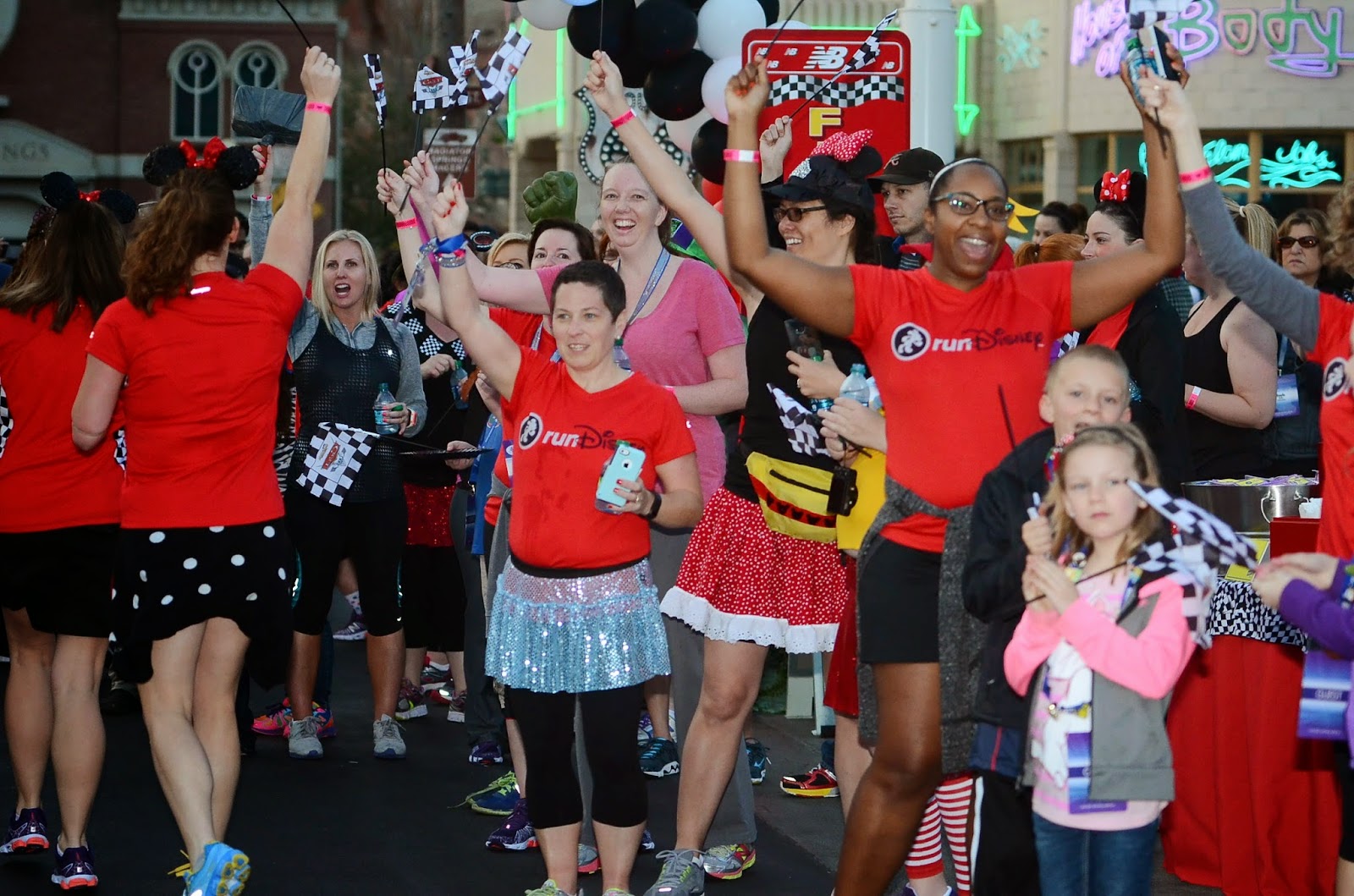 My one regret about running at the front of the pack is that I didn't get to cross the finish line while seeing THIS: 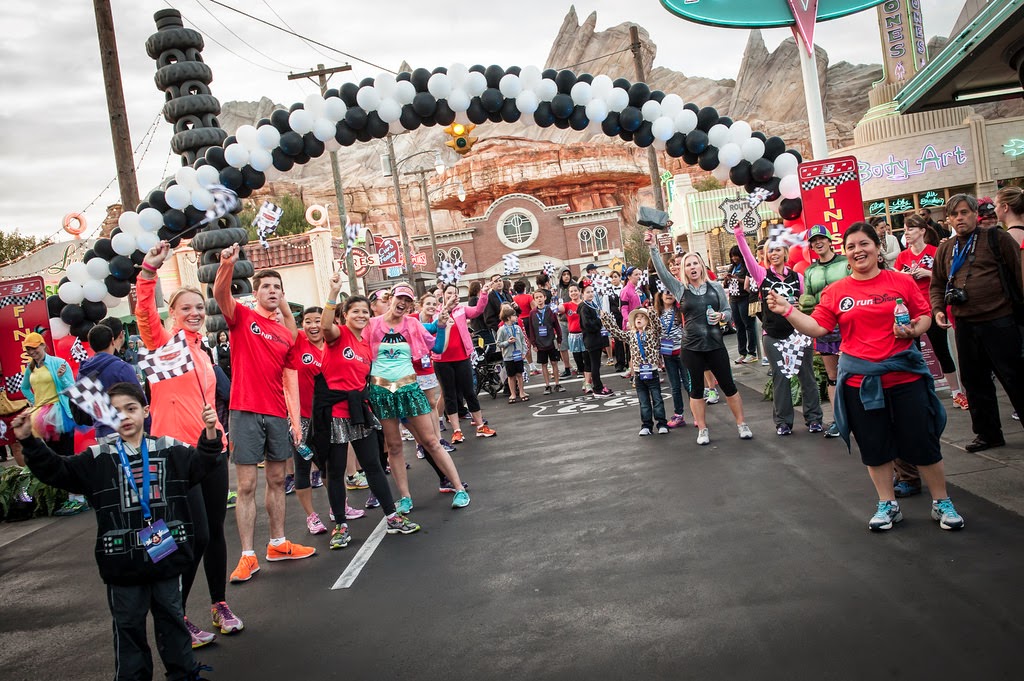 Everyone was waving their flags and shouting words of encouragement,  praise, and congratulations.  Whether you finished in 20 minutes or 30, everyone cheered you on like you had finished the Boston Marathon. The atmosphere was incredible.  Many of the runners had started training for this race just 2 months ago. Many had never run before. Many were finishing their very first race.  I think their achievement was way, way bigger than those of us who run regularly.  I was so humbled by their strength of purpose!  I could see happiness and pride in every single runner's face.  I know I felt it on mine.

After everyone had crossed the finish line, Lightning McQueen came forward to congratulate everyone and pose with everyone for one epic photo.  Now I see why they chose red for the runDisney shirts. Ka-Chow! 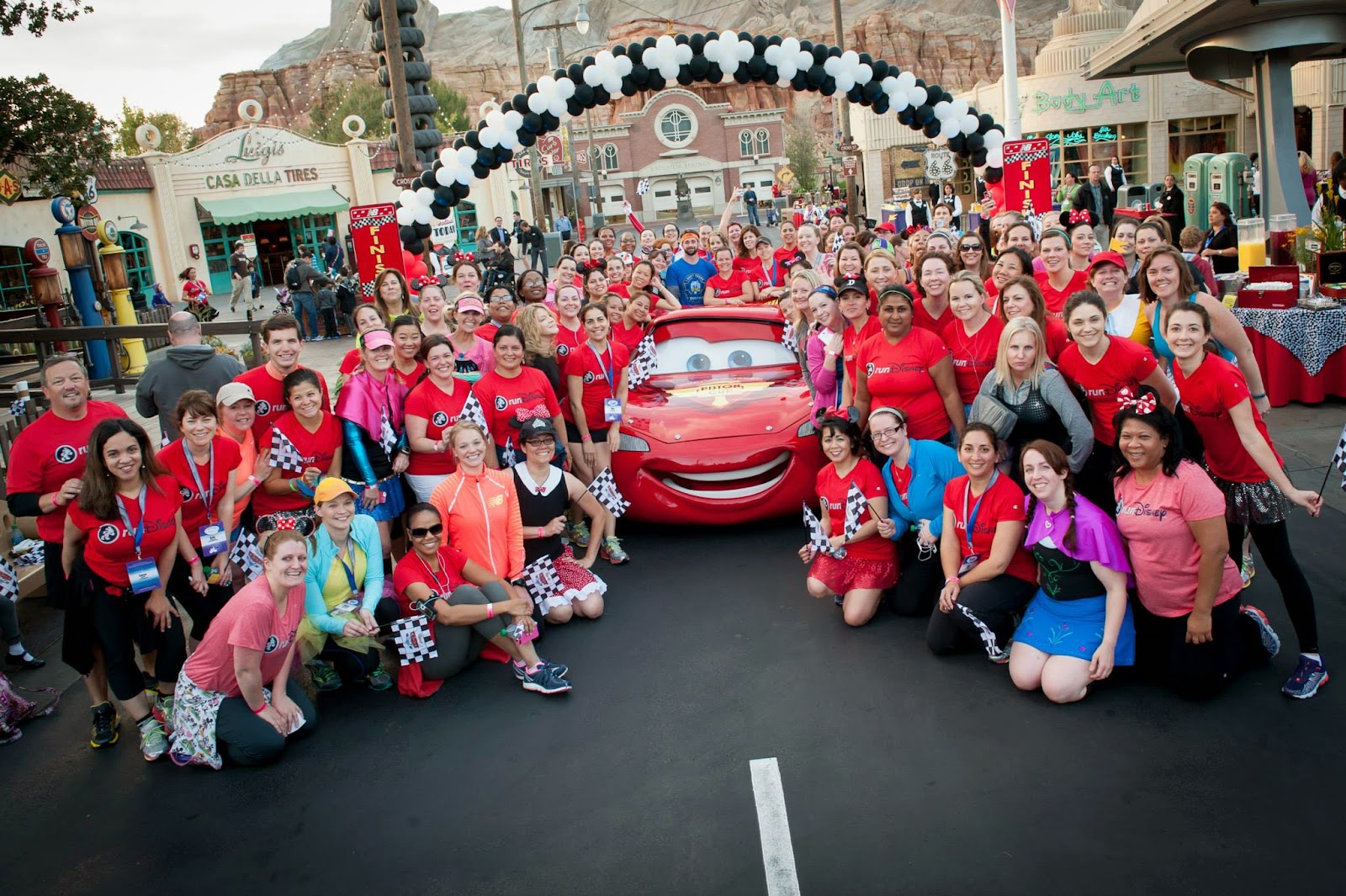 If running 2 miles in a runDisney race can make me feel like that, I can only imagine what running a 5k, 10k, or half-marathon would do.  I always knew I would enjoy doing a runDisney event, and my experience last weekend has only strengthened my resolve to sign up for one.  It's no longer a question of Will I or Should I.  It's just a question of When. 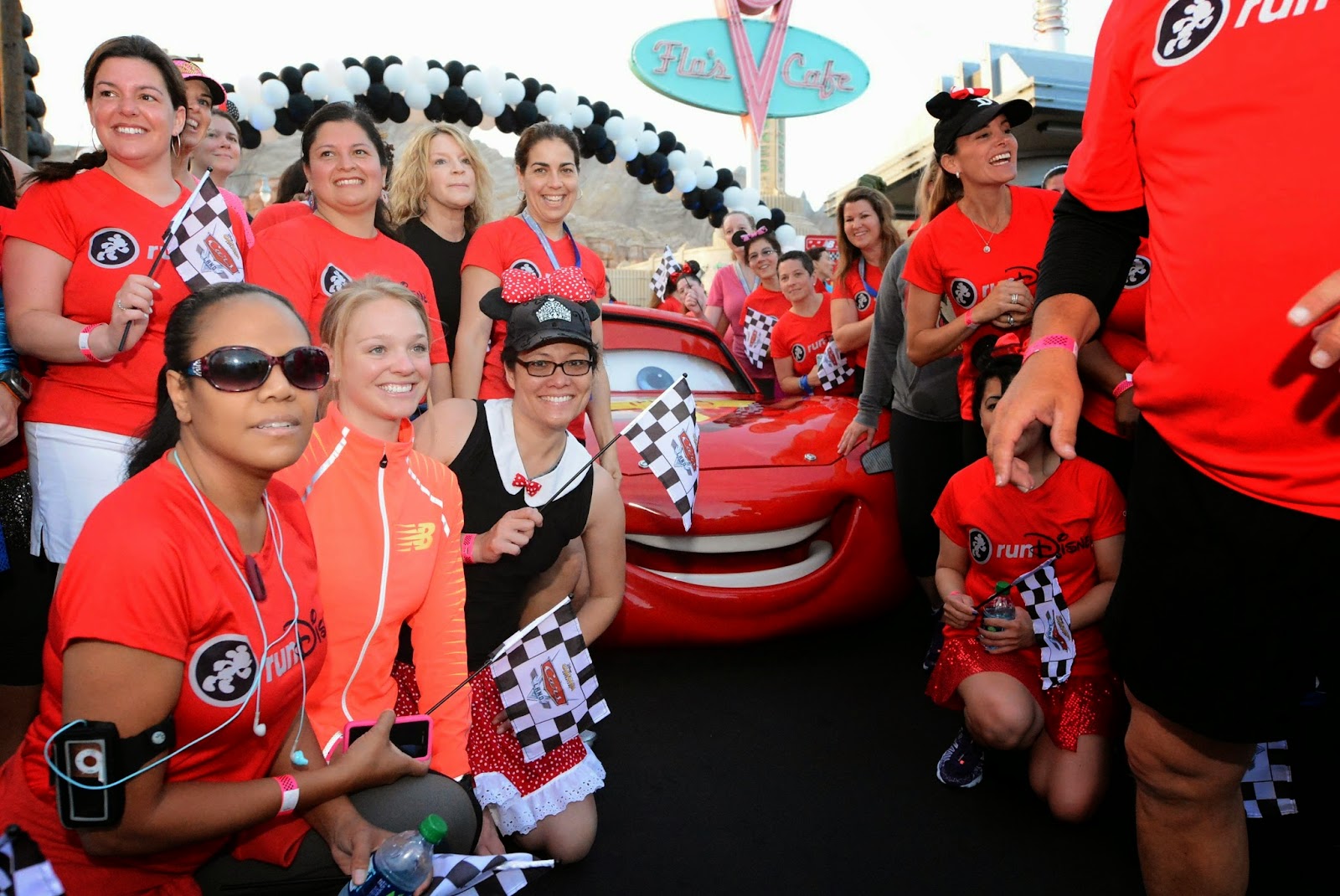 Thank you to the DisneySMMoms team, runDisney and New Balance for running such a wonderful event!  I had a tire-rrific time!


Disclosure: I was invited to attend the 2014 Disney Social Media Moms Celebration. The conference fee I paid included discounted lodging and park tickets for me and my family as well as free products from sponsors. I was not asked or required to blog about the conference or any of its sponsors.

I have run twice since the run at Disney and feel great! Here's to the 5k!

Wow, this post is pleasant, my sister is analyzing such things, so I am going to convey her.

Here is my weblog: domain