How NOT to make cupcakes 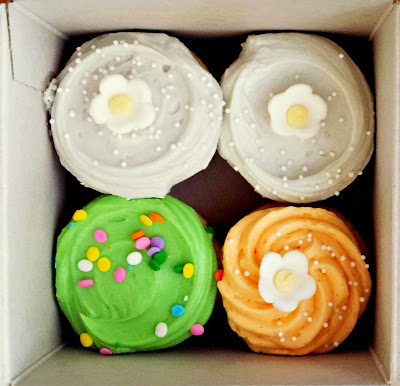 These beauties are not the subject of this post.   They're made by the best cupcakery in the Bay Area, Sibby's.

I spend a lot of time on this blog telling readers how to do things:  how to paint a kitchen, how to throw a fun party, how to make hummus, how to decorate for the holidays.  Lots of my posts contain instructions on how to do this and do that.   But sometimes telling someone what not to do can be just as important as telling them what to do.  With that in mind, I've written down a list of Don'ts that I came up with after a particularly disastrous cupcake baking experience.  Read and learn, people, read and learn.......

* Don't volunteer to bake cupcakes for your sons' soccer team and then promptly forget all about it.

* Don't remember you volunteered 2 hours before the team is scheduled to eat the cupcakes.

* Don't try to be a hero (or a martyr) -- BUY the damn cupcakes instead of attempting to bake them.

* Don't forget to buy confectioner's sugar for the frosting.

* Don't attempt to substitute regular sugar for the confectioner's sugar -- or if you, at least make it into a simple syrup so the sugar crystals melt and you don't end up with crunchy frosting.

* Don't stress out.  It's cupcakes for a kids' soccer team, not the Food Network Challenge.  I ended up pouring my crunchy liquid chocolate frosting into a covered bowl and telling the kids it was a chocolate dip for their cupcakes.  They absolutely loved it!   Getting to dunk their cupcakes into the "chocolate dip" turned out to be a lot of fun, and the parents loved it because their sons didn't end up eating a whole mound of frosting, just a thin layer.

posted on Saturday, June 15, 2013 Labels: about me, food, funny stuff
Email ThisBlogThis!Share to TwitterShare to FacebookShare to Pinterest

Haha--you just made lemonade out of lemons. Good for you!