Introduce your kids to classical music at the SF Symphony 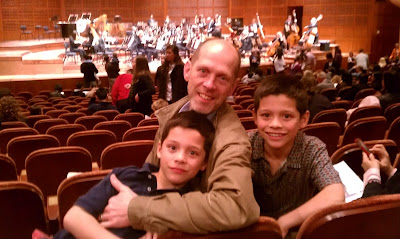 My dad loves classical music, so I grew up listening to Tchaikovsky, Beethoven, and Chopin. We listened to the Vienna Boys' Choir as much as we did to the Jackson Five, and I could hum the 1812 Overture and the Blue Danube Waltz as easily as I could sing YMCA or Tie a Yellow Ribbon. I married a man who loves the opera and has a collection of hundreds of classical albums, so it's natural that we'd want our kids to learn to appreciate classical music as we do.

You'd think that all it would take would be to play classical music at home all day long, like my dad did. But we play all kinds of music at home, from rock to rap, so classical tunes have to "compete" for attention. Classical music doesn't have a beat to dance to or lyrics to sing to. It doesn't sound like the music kids hear on tv or on videogames. And kids all seem to revel in the notion that classical music is for boring old fuddy duddies. So how does a parent combat this stereotype?

Thank goodness we live near the San Francisco Symphony. Their education programs are amazing! Throwing your average eight year-old into a full-length symphony or concerto would be disastrous, but their family and school concerts are just the right length, with just the right material to hold kids' interest. I've chaperoned 3Po and Jammy to a couple of their Concerts for Kids performances for schoolchildren, and have enjoyed myself as much as the kids did. There's nothing like a live orchestra playing the Star Wars theme to get you interested in classical music!

Last weekend, Alfie and I took our three kids to the Symphony's latest Music for Families concert, Musical Discoveries! An Afternoon of Overtures!, and I can't recommend the experience highly enough. The Symphony sent us some reading materials a week before the performance, including a program guide with descriptions of the pieces we would be listening to, and an activity guide introducing the kids to the different instruments in the symphony. They even included a book with short biographies of twenty famous musicians, from Beethoven to Mozart to George Gershwin.

On the afternoon of the performance, we dressed up and had a nice lunch in the Hayes Street district, just a stone's throw from Davies Symphony Hall, which made the event seem even more of a special treat. The day's program consisted of 4 famous classical overtures: Mozart's Overture to the Marriage of Figaro, Brahms' Academic Festival Overture, Wagner's Overture to Die Meistersinger and Tchaikovsky's Romeo and Juliet Fantasy Overture. Resident Conductor Donato Cabrera explained to the audience what an overture is. He described the events and people that served as inspiration for the composers when they wrote the overture. He showed us how to listen for specific themes and elements that the composer wanted to highlight. Thanks to all this prep work, when they finally played each piece, we had a better understanding of who wrote it and why, so we listened with a heightened appreciation -- and enjoyment. Thanks, SF Symphony, for helping us wake our kids up to the joys of classical music, and for putting that old stereotype to bed!
posted on Tuesday, February 28, 2012 Labels: family, Silicon Valley parenting, things to do
Email ThisBlogThis!Share to TwitterShare to FacebookShare to Pinterest

Sounds great! I will need to keep an eye out so I can take my son next time they do this!

Thank you for attending and bringing your family to the concert!