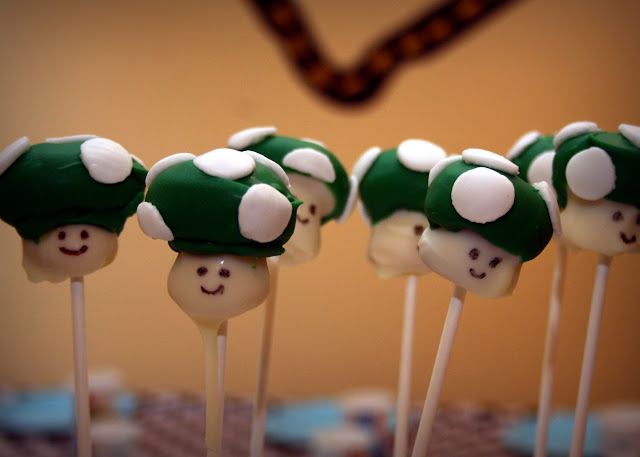 A quick internet search led me to the Queen of Cake Pops, Bakerella, and her amazing gallery of cake pops for every theme imaginable. Her instructions for basic cake pops seemed simple enough, so instead of ordering them from a bakery, I decided to try making them myself. 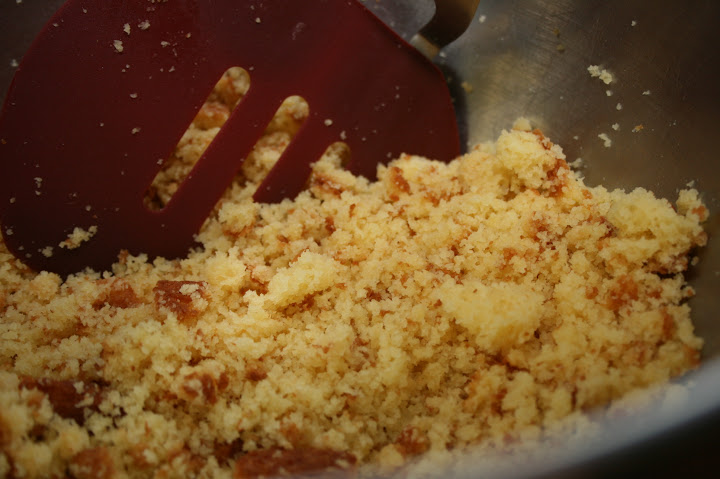 You start by baking a 9"x13" sheet of yellow cake (or whatever flavor of cake you want). I used boxed cake mix, but I'm sure baking your own cake from scratch will yield a far superior cake. Then you crumble the cake up into fine crumbs. I used my trusty Kitchen Aid mixer, but you can use a spatula, a fork and knife, or your fingers. 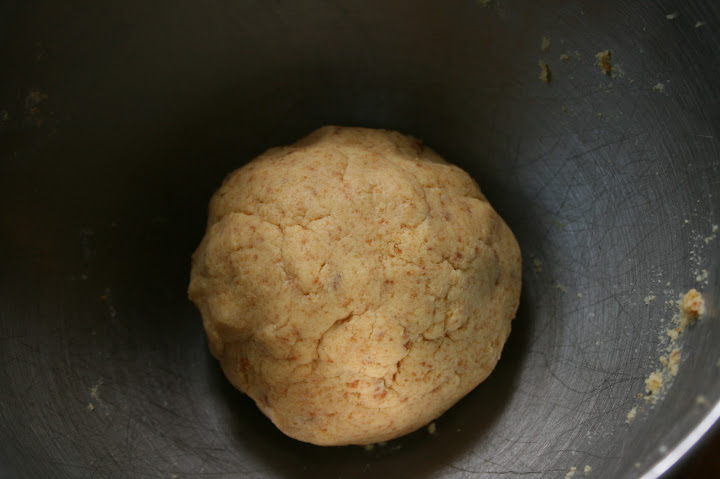 Next, add about half a can of ready-made vanilla frosting (about 12 Tablespoons or so, and I'm assuming you can make your own buttercream icing) to the cake crumbs and mix them together until the mixture resembles soft cookie dough. 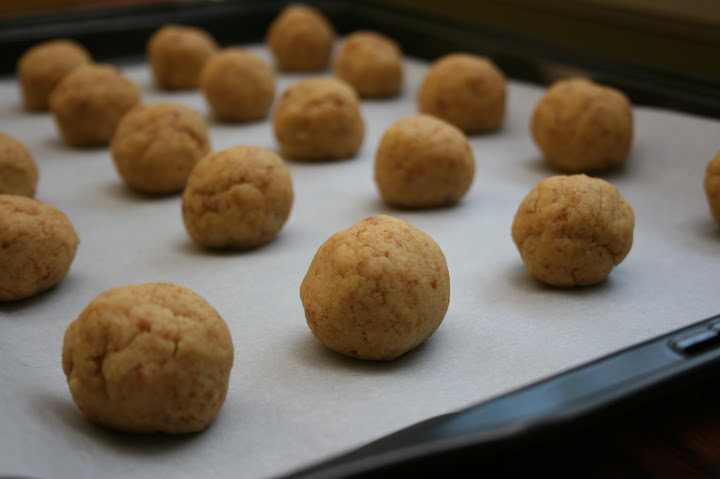 Take heaping teaspoonfuls of the dough and roll them into balls, about 1.5" in diameter. I used a mini ice cream scoop to measure out the dough so the balls would be evenly sized. You'll end up with about 40 balls. Refrigerate for 20 minutes or so to firm them up. 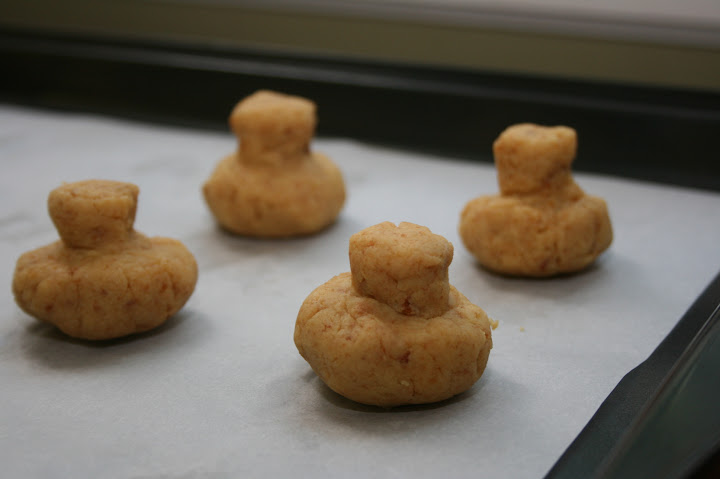 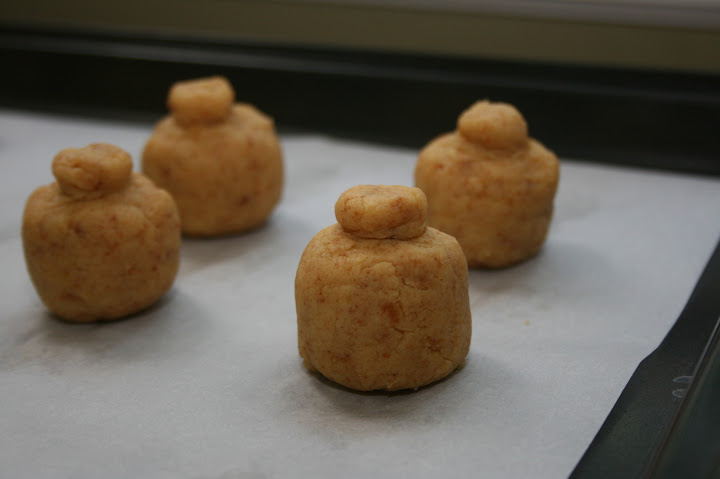 At this point, you can actually start dipping the cake pops, but since I was doing mushroom-shaped cake pops, I had to first hand-mold them into the shape of mushrooms and Lego heads. By the time I was done, the dough had softened up quite a bit, so I put them back into the fridge for another 20 minutes or so. 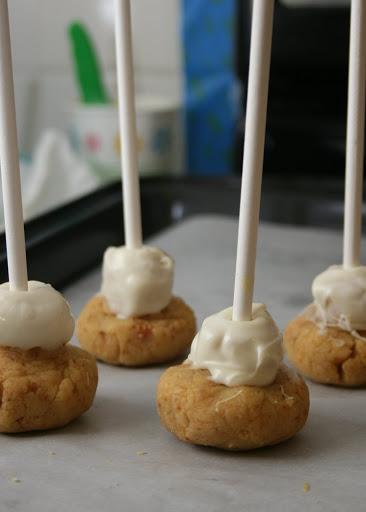 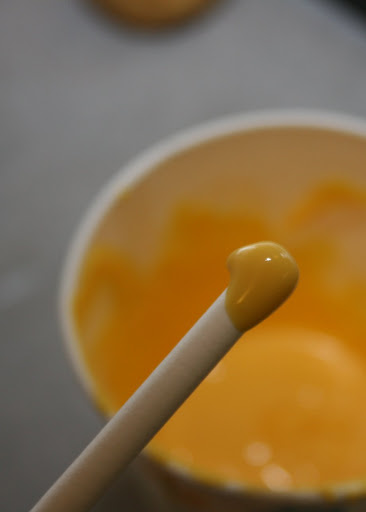 Next, melt about 1/4 cup of candy melts according to the directions, until the melts are nice and runny. Dip the end of a lollipop stick into the melts, then stick it into the bottom of the cake pop, about 3/4 of the way through. For the mushrooms, dip the bottoms into white candy melt before inserting the lollipop stick. Then put them back into the fridge to firm up for about 20 minutes (yes, I know that's a lot of waiting, but you don't want your cake pop crumbling to bits when you dip it into the candy melts!). 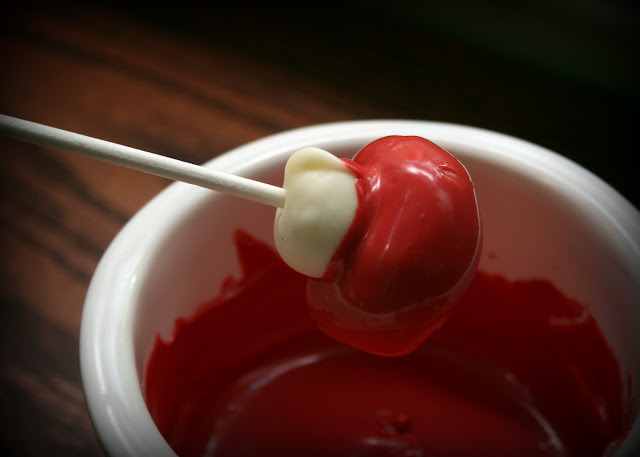 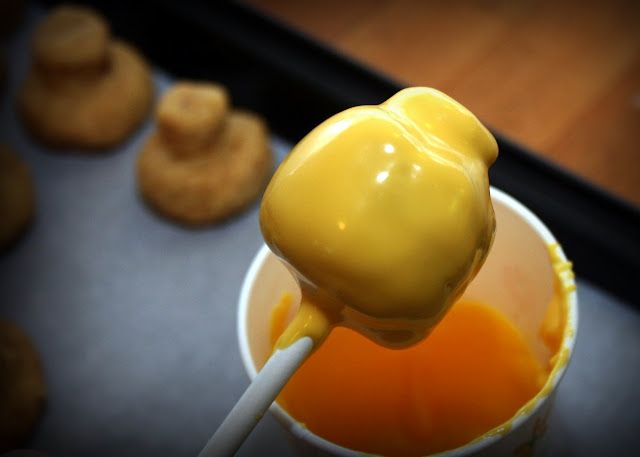 Once the cake pops are firm enough to work with, melt the rest of your candy melts according to directions. Carefully dip your cake pop into the melted candy, lift and swirl it a turn or two. This is a lot trickier than it sounds, but practice makes perfect (or passable, at least). For the mushrooms, just dip the cap, since the mushroom stem already has white candy coating. Stick the cake pops on a styrofoam block to dry.

To make the mushroom dots, I rolled out some fondant and used an apple corer to cut out tiny circles. I "glued" them onto the mushroom cap with candy melts (by the way, I'm hoping you've realized that the red candy melt does not turn green; this photo is from a different batch!).


The last step is to draw faces on with food coloring markers. I used Wilton brand markers and they sucked, so next time I think I'll follow Bakerella's link and use AmeriColor brand instead. 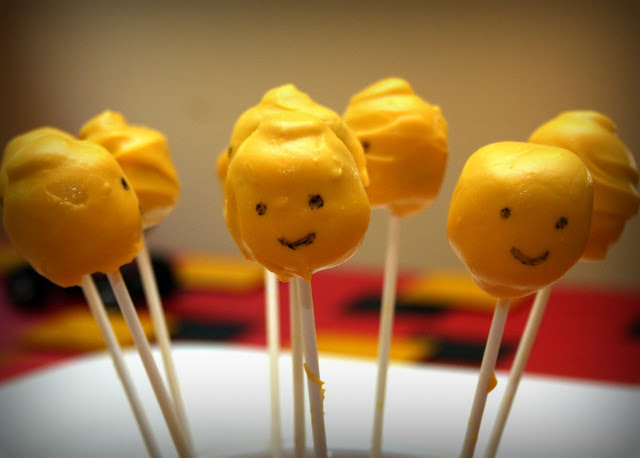