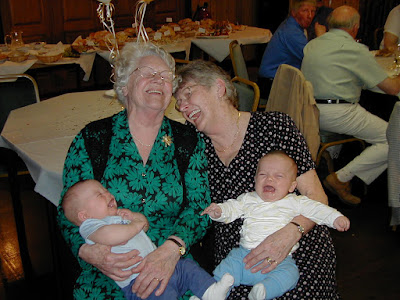 So much has happened since Aunty Ivy was born in 1911*.

She has never taken a high blood pressure pill in her life.

Aunty Ivy has slowed down a bit in her last decade, but she was determined to stick it out to 100 so she could get a telegram from the queen.

She lives in a senior center but does her own cooking and her own laundry. She remembers everyone's name and how they are related to her and what they were doing when she last saw them. Last week she found herself stuck in a faulty elevator for half an hour. Firemen and ambulances were standing by for her once they finally got the elevator working. Aunty Ivy strolled out of that elevator like she was taking her Sunday stroll and told everyone she was going to her room to make a cup of tea.

She's an amazing woman who lives every day to the fullest, in a way that young whippersnappers like us could never understand. We may not be able to understand, but we sure can appreciate.

Happy Birthday Ivy - and may there be many more!