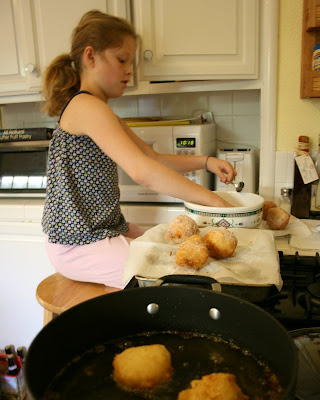 Happy National Donut Day! To celebrate this all-important (and delicious) holiday, I've compiled some fun donut facts from around the internet:

* In the U.S. alone, more than 10 billion doughnuts are made every year.

* National Doughnut Day started in 1938 as a fund raiser for the Chicago Salvation Army. Their goal was to help the needy during the Great Depression, and to honor the Salvation Army "Lassies" of World War I, who served doughnuts to soldiers.

* Popular legend has it that the doughnut was invented by a Dutch sailor named Hanson Gregory. His mother, Elizabeth sent him some olykoek, or "oily cake" for one of his voyages, and when a sudden storm hit the ship, he impaled one of the cakes on the ship's steering wheel to keep his hands free.

* Another explanation for the origin of the donut hole is that it was the ideal solution to the dilemma that appeared to plague early donut makers – having an undercooked center when the cakes were removed from the fryer.

* The whole world loves donuts! Here are donuts (or some version of sweet fried dough dessert!) from around the globe:


Of course, a better way to celebrate would be to munch on a donut. Check your local Krispy Kreme or Dunkin Donut shop for free donut promos today, or make yourself a batch of fresh, homemade donuts!
posted on Friday, June 03, 2011 Labels: holidays
Email ThisBlogThis!Share to TwitterShare to FacebookShare to Pinterest