How to Make the Perfect Potato Salad 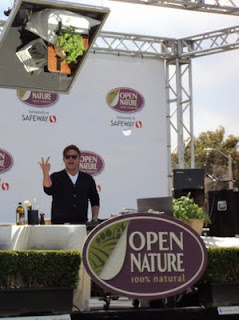 I love potato salad, but when I make it myself I usually just squirt some mayo and mustard onto boiled potatoes and season with salt and pepper. It's good, but not great. This weekend I learned how to make not just great, but Great potato salad, from none other than Food Network star Tyler Florence. He was the celebrity chef at Safeway's World's Longest Picnic Table event, where he demonstrated how to make a couple of easy picnic dishes. This was one of them. Even more valuable were his tidbits of information on how to make the perfect potato salad. I'm sharing Tyler's tips here with you, but don't tell anyone else or I'll have to silence you:

* Boil your potatoes from cold water (i.e. put them in a pot of cold water and boil them, instead of putting the potatoes in boiling water) so they cook evenly.

* If you let the dressing stand for at least 1 hour, the flavors will blend and your potato salad will be even more delicious.

Here's Tyler's recipe for his mother-in-law's potato salad. I made a few changes, some intentional (to make it a little bit healthier), some unintentional (forgetful me), and I'm including my changes in italics to show you that you can play a little with the recipe and still end up with a great tasting final product. 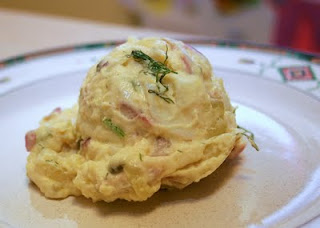 
1) Put potatoes and eggs into a big saucepan of cold salted water. Bring to a simmer. After 12 minutes, remove the eggs with a slotted spoon and let cool. Continue cooking the potatoes until a pairing knife poked into them goes in without resistance, about 3 minutes longer. Drain the potatoes in a colander and let cool.

3) Peel the cool eggs and grate them into the bowl. Break up the potatoes into rough chunks, add to bowl, and toss to coat with the dressing. Season to taste with sale and pepper. Drizzle with a little olive oil and garnish with reserved scallions and capers.


The dill and yogurt give this salad a lovely fresh taste. Yum.

Click here for a recap of the event, and for some fun facts about the World's Longest Picnic table.
posted on Monday, June 20, 2011 Labels: recipes, summer
Email ThisBlogThis!Share to TwitterShare to FacebookShare to Pinterest

Looks so delicious! Thanks for sharing Tyler's recipe!