A roller coaster of emotions

Two weeks ago, I mailed in my ballot. I was excited. The world was full of hope and change. The past 18 months had been a nightmare of homophobia, xenophobia, and misogyny. My mood rose and fell with Hilary Clinton's standing in the polls, but on the whole I felt confident. I meticulously researched every candidate and measure on the ballot because I wanted to do my civic duty. I was indifferent to a few measure and unsure of others, but I had no doubt that I was on the right side of history with my choice for president. 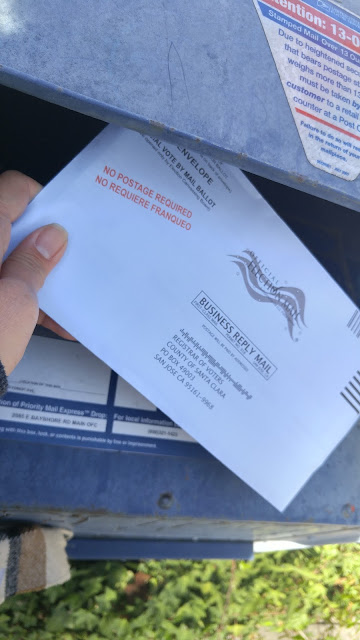 One week ago, I dressed up in a pantsuit and went to the polls, even though I had already mailed in my ballot. I wanted that "I voted" sticker and I wanted that selfie, because I was convinced that history would be made. I didn't care that the day was hot and a blazer was totally inappropriate; I didn't care that the kids at school looked at me curiously and the staff asked me if I was attending a meeting afterwards (I usually come to work in jeans). One week ago I was quite emotional. I was sure I would be bursting into tears that night when the first woman president of the United States would be elected. I made sure my phone battery was charged so I could take a photo of the TV screen as soon as they called the election in Hillary's favor, just as I had when Obama was elected four and eight years ago. 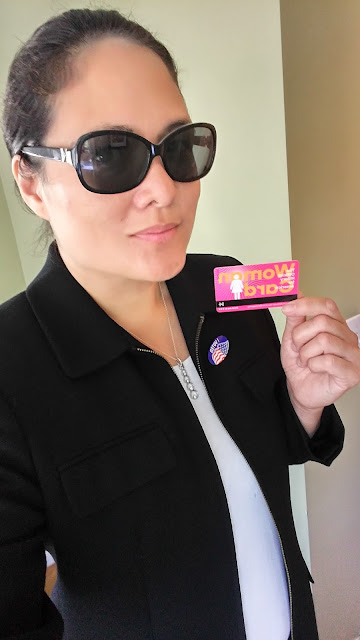 Well, we all know what happened that night. History was made, all right. Just not the kind of history I was hoping for. Just not the kind of history I expected.  All night long I watched the tv screen with a sick feeling in my stomach, disquiet morphing into disbelief morphing into panic and finally, despair. I didn't take a photo of the tv screen. I didn't even stay up to hear the networks call the winner. I couldn't bear to.

Looking back, even just one week after, I wonder how I let things affect me so much that I would actually CRY about it. But looking back, I'm glad I did. I didn't cry because I'm a poor loser. I cried because I really, really wanted her to win, not just because she wasn't Trump, but because I think she is the most qualified presidential candidate ever (note: I said "I think". My opinion. I don't want to debate her merits at this point; there's no point). I cried because I was sad that half the nation (actually, just under half; Clinton won the popular vote) did not share my values. I cried because I was disappointed in myself for not realizing it. I guess liberals have their own kind of bubble. 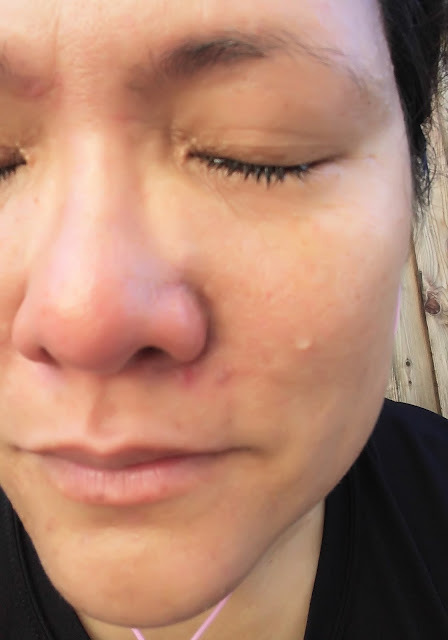 But you know what? I'm done with crying. One week minus two days ago I put on my big girl panties and got out of bed with a new emotion: determination. I'm determined to take care of myself better, so that my mind and my body are better equipped to deal with this kind of tension. That means more exercise and less Facebook! I'm determined to keep hoping that Trump won't make good on most of his campaign promises. I'm determined to keep telling my kids that they need to be educated and involved in this funny thing called democracy. They are NOT going to be one of those young people who don't show up to the polls. I'm determined to keep my eyes open and speak out (in person and online) against hate if and when I see it.  I'm determined to view the "other side" with more compassion and not dismiss them as uneducated idiots. Even if I can't agree with (or respect) their viewpoint, I should at least be aware that a lot of people have that viewpoint.

It's going to be an interesting next four years.

posted on Tuesday, November 15, 2016 Labels: about me, politics, rants and raves
Email ThisBlogThis!Share to TwitterShare to FacebookShare to Pinterest