Just a five minute internet search will yield dozens of recipes for homemade Dole Pineapple Whip.  I've been reluctant to try them for fear that they won't measure up to the real thing, and will only leave me wanting to drop everything and go to Disneyland.  But my cravings have finally won out, and I decided it wouldn't hurt to try.  Nothing ventured, nothing gained, and besides, all the online recipes I found claimed to be close matches to the Real Thing -- not exact matches, but delicious nonetheless -- so finding a good recipe ought to be easy, right?

Finding a good recipe turned out to be more difficult than I anticipated.  Problem 1: most of the recipes I found online call for crushed pineapples, and the resulting concoction was way too stringy for my taste.  The real Dole Pineapple Whip is smoooooth as silk!  Problem 2:  The real Dole Pineapple Whip is a non-dairy dessert, and all of the non-dairy recipes I found called for non-dairy whipped topping to give the dessert its creaminess.  I didn't like it either; it just tasted like foamy, pineapple-flavored Cool Whip!  Problem 3: I wanted the closest version possible, so I wanted a recipe that called for an ice cream maker, not just mashing everything in a bag, freezing the bag, then mashing the half-frozen bag to break up the ice crystals.

Funny thing, the recipe that ended up a winner wasn't even on the internet.  I found it in the recipe booklet of the ice cream maker that I borrowed to test out the recipes.  It calls for frozen concentrated pineapple juice, which keeps the texture smooth and the flavor strong.  This is seriously the best recipe for homemade Dole Pineapple Whip I've tried so far!


Homemade Dole Pineapple Whip
Pour the following into a blender: 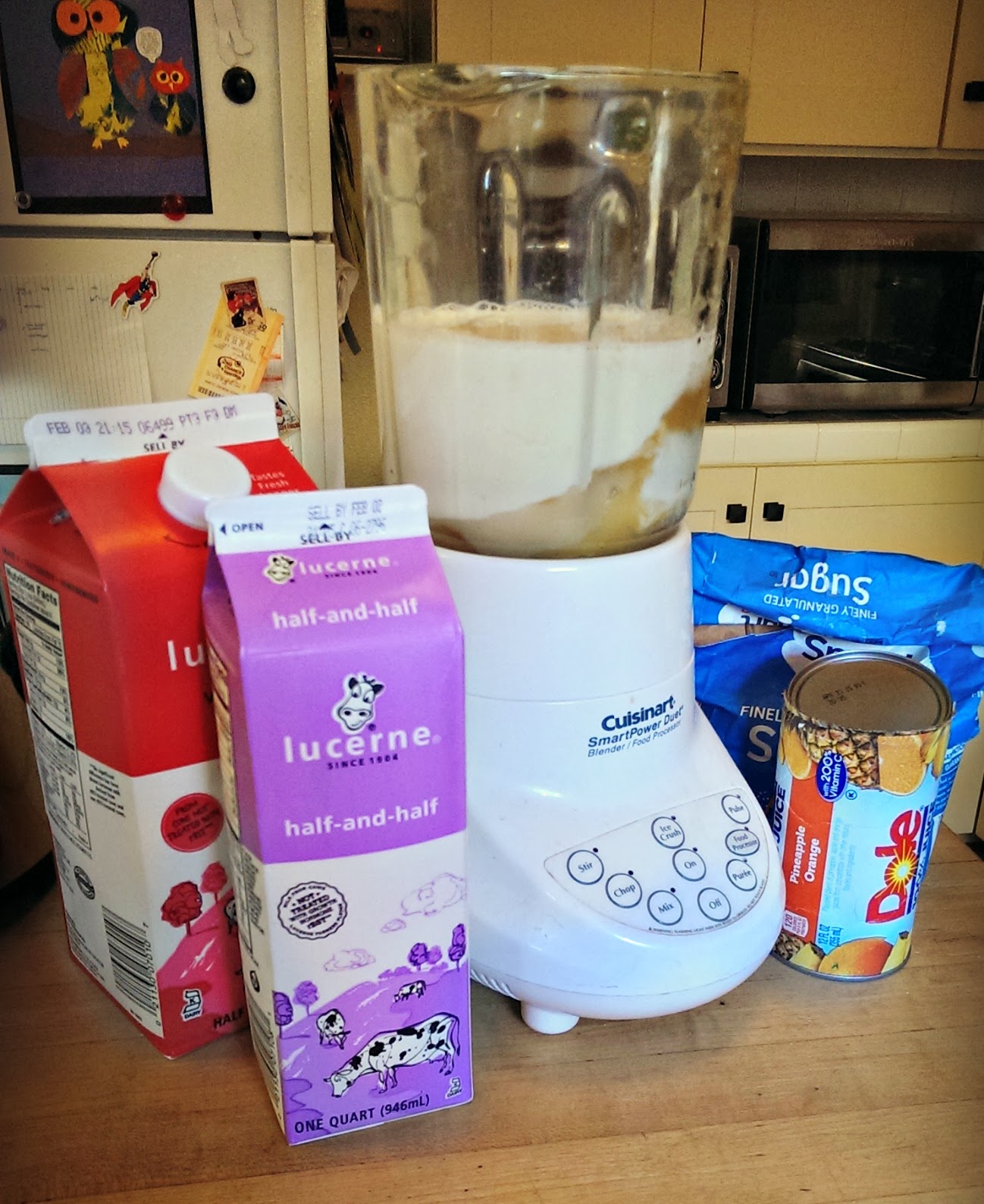 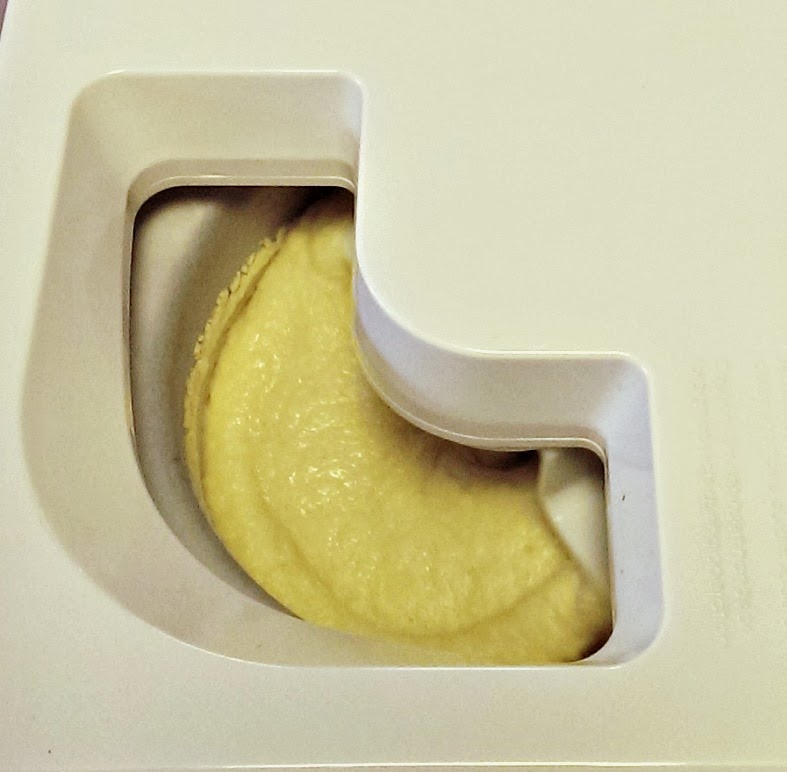 It took about 25 minutes to get the right consistency.  At this point, the mixture was much thicker and able to hold its shape for more than a few seconds.  Because of all the air mixed in, it had also gained a lot of volume. 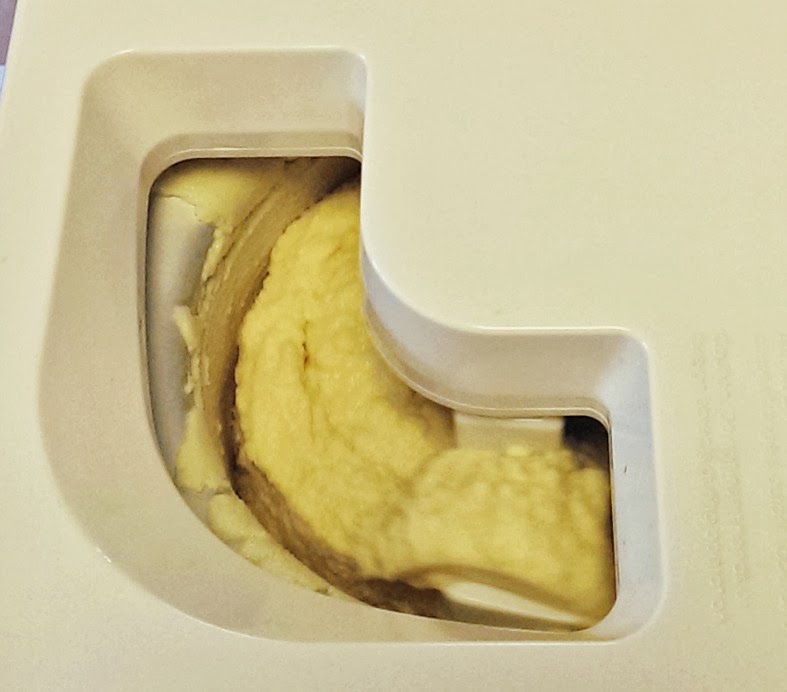 To assemble the Dole Pineapple Whip, spoon your mixture into a plastic ziploc bag, snip off a corner, and pipe the mixture into a clear plastic glass until it is about 1/2 full.  The Cuisinart soft serve ice cream maker I borrowed actually lets you dispense your dessert, but you don't get the beautiful textured swirl of a commercial ice cream maker. You get unappetizing dollops of ice cream, so I ended up using a ziploc piping bag anyway.  Then pour some pineapple juice into the cup.  For garnish, skewer a maraschino cherry with a paper umbrella.

Ta-daaaa!!! Behold, a beautiful homemade Dole Pineapple Whip dessert!  I used a smaller plastic cup because I wanted smaller servings, and like I said, I couldn't get that beautiful soft-serve swirl.... but it looks pretty darn good, don't you think?? 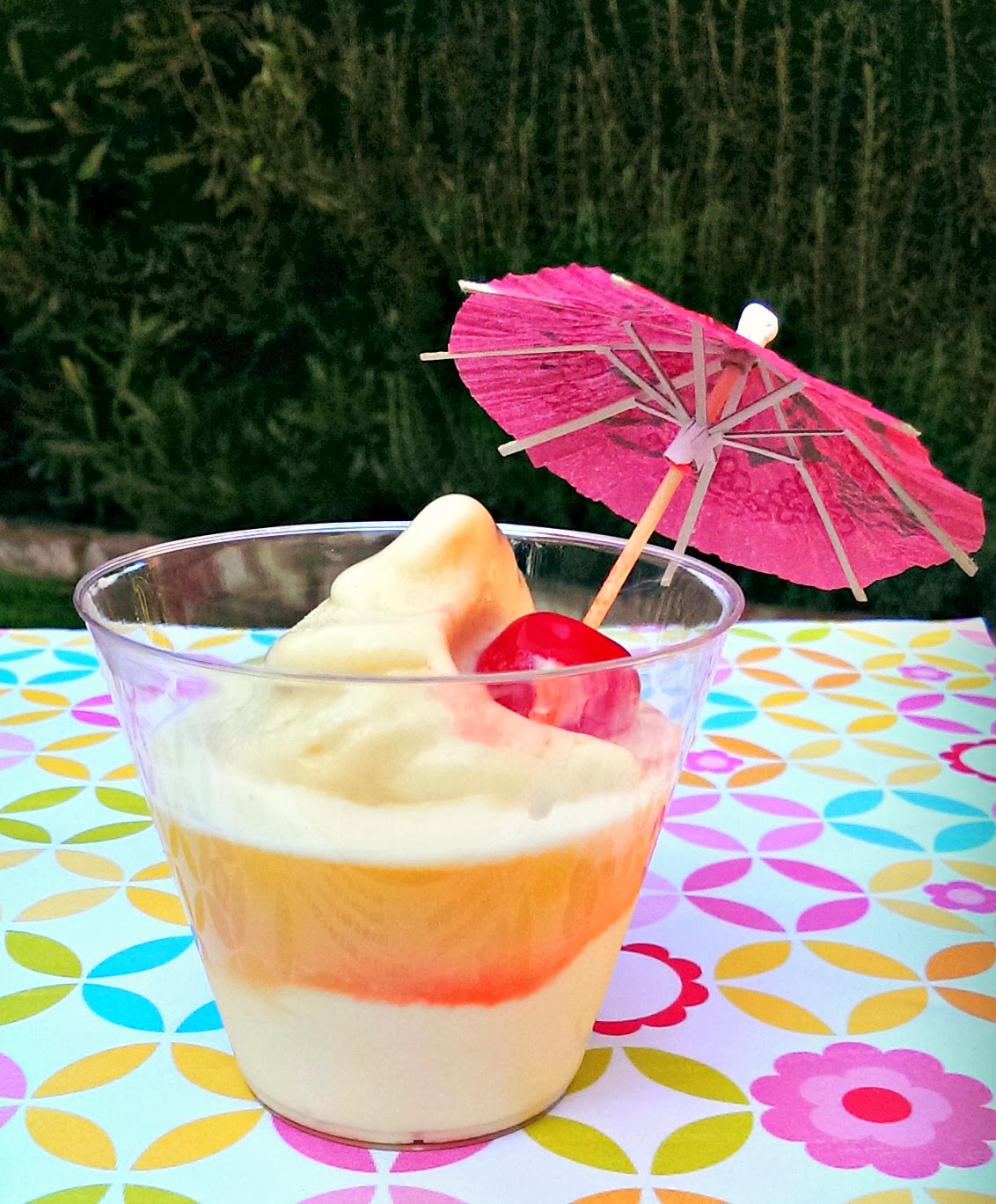 And it tastes pretty darn good, too!  Since I used milk and half-and-half, it's creamier than the real Dole Pineapple Whip, but this is definitely the closest homemade version I've tried.  Next time, I'll try using 2% milk instead of whole milk and see if that brings down the creaminess a bit.  But the kids definitely aren't complaining. 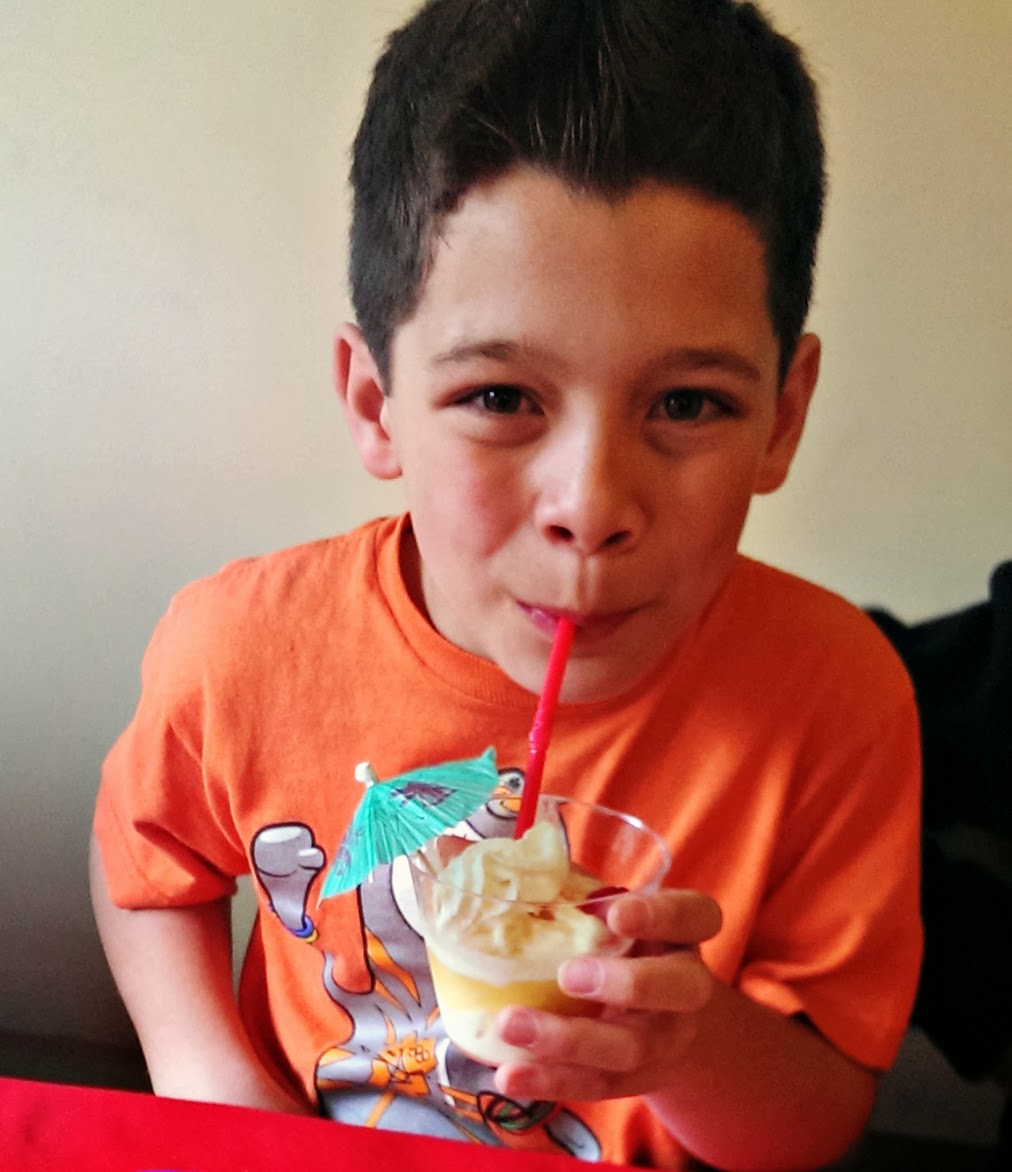 Come to think of it, it might not be such a bad thing to keep the homemade version of Dole Pineapple Whip slightly different.  That way, the Real Thing will always remain a rare treat, which means we'll always look forward to it.  And when we actually do get to taste the Real Thing again, it's always going to be a special experience. 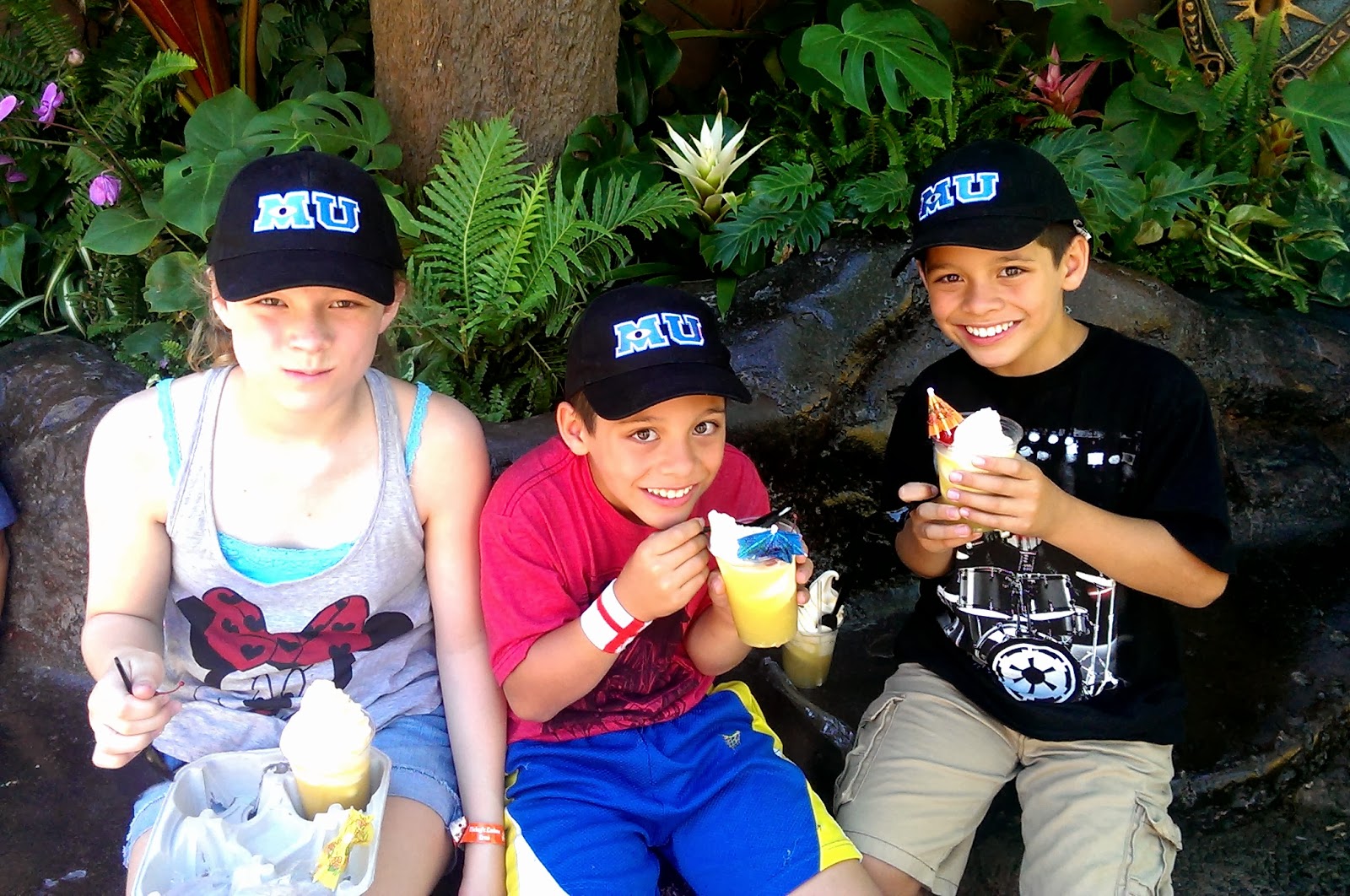 My sister and her fiance are both cast members at Disney World and are planning to spend their honeymoon in Disneyland. I am planning a Disneyland themed wedding shower for them, so park inspired foods are a must! I am planning to try out your recipe for the Dole Whip, thanks for putting in that hard work to create this!