All I want for Christmas is.... 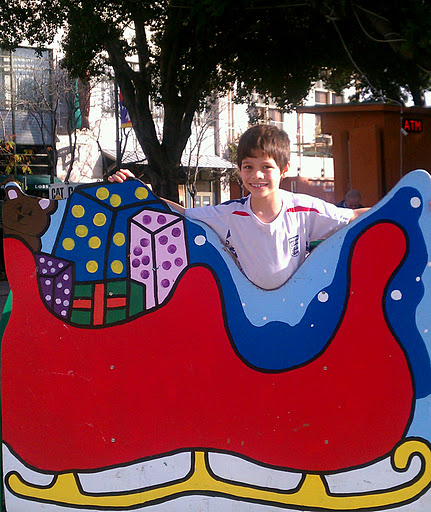 If only this fellow were the real Santa, I'd get everything on my Christmas wish list for sure!


Alfie and I have decided not to get each other Christmas presents this year. After all, we've already got each other new kitchen cabinets, a new front door, a new computer desk and a new armoire. So this year, I'll have to rely on Santa to get me all the other stuff I want for Christmas. Given what I'm asking for, I think I might need all of Santa's magical powers to make my wishes come true!

Here's what I'm asking from Santa this year:

1) An exercise bike that powers my computer -- no cycling, no blogging.

2) A tagging chip that I can insert into my kids, so I know exactly where they are at any point during the day. Bonus points for Santa if the chip includes a "panic button" option that the kids can press to alert me (and the police) if they ever get accosted by strangers.

3) An alarm clock chip that I can insert into myself, which makes me incapable of staying awake beyond 11:00PM and before 7:00AM.

4) A dog or cat who can take care of itself for up to 1 month so we can go on vacation without having to put him or her in a boarding home, or ask someone to pet sit. Bonus points for Santa if the pet can dust the furniture while we're gone.

5) A purse that changes color to match my outfit.

6) Clothes that iron themselves (without being made of cheesy polyester).

7) A manicure that doesn't chip until I get sick of the color.


Hey, I did say it was a wish list.
posted on Wednesday, December 21, 2011 Labels: about me, holidays
Email ThisBlogThis!Share to TwitterShare to FacebookShare to Pinterest