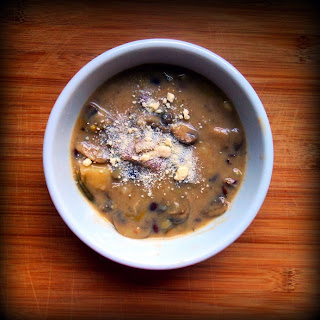 I love Cream of Mushroom soup. It's my childhood comfort food. Forget macaroni and cheese or chicken pot pie -- to this day, nothing brings back memories of childhood like cream of mushroom soup, rice and Spam (hey, I grew up in the Philippines).

Up until recently, there has only been one Cream of Mushroom soup: Campbell's Cream of Mushroom Soup. Not the low-fat, low-salt version. Not the ready-to-eat version. The original, gloppy, add-one-can-of-water-and-stir-out-the-lumps version. But it's so full of salt and calories that nowadays, I can only justify having it once in a blue moon (like when I'm in the Philippines).

I've actually been avoiding creamy soups lately, for health reasons. When I just can't resist the temptation, I been trying to go for more natural mushroom soups -- at least, as natural as mushroom soups can be when they're in a can or a box. I've never actually made any kind of mushroom soup myself, until this week, when I was given a coupon for some almond milk and a bunch of recipes to go with it. I tried making Cream of Almond and Wild Mushroom soup, and I am in love. Campbell's Cream of Mushroom is wonderful, but with this soup you can actually taste the mushrooms, not just the cream.

I think it's time to get back to my childhood staple -- except this time, it's a lot healthier and more natural. Maybe this version will become my kids' childhood staple. Yum!

Click here for the recipe for Cream of Almond and Wild Mushroom soup, plus a chance to win a $40 Whole Foods gift card!
posted on Friday, September 16, 2011 Labels: food, recipes
Email ThisBlogThis!Share to TwitterShare to FacebookShare to Pinterest